Miming on the Karaoke Machine 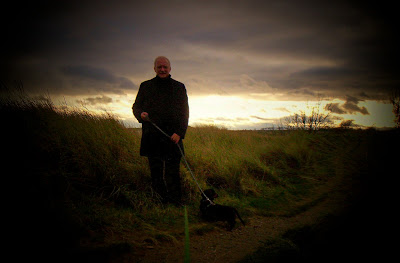 I RATHER LIKE that photograph. A friend, who would know, said it looks like Heathcliff walking his ferret.

I suppose that day, abbreviated as it was so far north as we are, was the last chance to go to the beach until next spring. Next spring might be two days in August 2009, this being Northumbria. We took a bus up the coast at mid-morning, had lunch in a pub called The Hope and Anchor, then walked the few yards onto the sands and wandered about for two hours.

A nice sniff-round for Cailean: he likes to get his nose into dead crabs, empty sea-shells, strings of seaweed, and the unnatural rubbish that people drop after their polystyrene-packaged picnics are eaten, after they've smoked their rollies, after their penises deflate. Really lucky dogs find a dead seal or a stinking, bloated sheep on its back.

At the pub, I had haddock, chips and mushy peas, and a pint of lemonade. The barmaid asked if Cailean might like a plate for some of my fish, and I thought he might. However, somewhat to my embarrassment, the little dog refused to eat from the plate, and not even from my hand. There was another very large dog watching him, and some other diners making a clatter with salads, and two frightfully gay men at the bar chattered away loudly about the antique auction on the plasma screen telly attached to the end wall, apparently more interested in presenter Alistair Appleton than the hideous detritus from some old lady's attic. All so very different from my kitchen where Cailean usually sups from his steel bowl. I paid my £10, which seemed a bit steep for what I'd had, especially as my lemonade had never been near a lemon, and we scarpered.

By half-past-two the cool sunshine was quickly vanishing as a storm rolled in. I set up my camera on a bench at the back of the beach and took the one photograph with the sunset, inland, behind me. We walked quickly back to the village as the temperature started to drop, and had to jog to the bus shelter to beat the rain. We shivered there for thirty minutes, and were ready for the warm, even stuffy, bus when it turned up.

However, we'd had a day out, and during the two weeks since then we've had light snow, ice, and a blizzard, word that this is the coldest winter in 33 years, odds 3-1 that we'll have a white Christmas, more ice, and yesterday and today we've had heavy rain. In fact, we've not been more than twenty feet from the kitchen door in two days. Cailean was okay with his first snow, though he refused to pee in it because it was touching his bits (I'm like that too) and we had to step into shelters to do it. But he dislikes this icy rain and running water. Try and keep him out of a hot shower in the flat though!

We have our very small fibre-optic Christmas tree up on a table, and Cailean has totally ignored it. He has dragged his bed up against the radiator in the front room, gathered his soft toys, blanket, spare cushion and three balls around the bed, and spends a good deal of home-time there. He can see the tree with its out-of-sight-light-show (if only I'd had the tree in the 1960s, I'd have found God) and doesn't seem to care. I have to wonder if the slow changes in colour that creep over the tree rather subtly just don't register on the boy's retinas. I'm nearly in a state of Nirvana, and Cailean hides his Snakey-Snake under a blanket and has a kip.

The Christmas cards are going up on string and on the mantelpiece each day, just as my mother's were displayed, and the room looks quite jolly. My Easter cactus is blooming at Christmas for the first time, some sort of religious conversion. As I recently put new covers on the furniture, recovered the pillows and bought some small mats to add colour to the room, which is now golden rather than maroon and white, it is most pleasing to sit and enjoy the warmth when we get home in late afternoon.

I am going to three Christmas dinners. One is in a posh restaurant (I've already ordered fresh raspberries and a sorbet for dessert) with about 20 others, and Cailean will miss that one. Yes, a doggy-bag is planned. I'm also attending an open house the next day, hoping there will be something other than turkey to nibble at. Cailean will be with me, I believe. Father Christmas is to turn up. I'm hoping Cailean will not be frightened. Christmas Day will be spent at the home of some friends in town. I shall be awfully full by Boxing Day.

Cailean is getting his own slipper for Christmas. He's eaten one pair of mine, and has started on their replacement, so I'm hoping the neon-purple-and-green slipper from the pet emporium is more appealing. Please.

Last New Year's Eve, at the stroke of midnight, I was wakened by knocking at the kitchen door. This was before I'd got Cailean; I'd been watching the telly and dozed off. I opened the door to find a Scotsman in a white t-shirt and jeans, in the bitter cold, holding a bottle of whisky. He wanted to know if I'd like to share a wee dram with him. I do not drink, and have never liked the taste of whisky, and who expects strange Scots on their doorsteps? Of course, I now know it was my (then) new neighbour who I'd never seen before, he's a nice bloke, brings Cailean treats, and it's good luck all round for Scots to have a wee dram at midnight at the New Year with someone. I declined a year ago, but hope he'll return as we move into the first minutes of 2009. I won't drink his Scotch, but he may let me sip my Horlicks and not think me totally naff.

I have a few resolutions, I suppose. Stay fit physically, read more, and travel a bit, and try to really make a good job of my now-large genealogy project. I have over 400 names in the family tree now, all direct lines back to about 1800, some back another 100 years. I need to attach references, certificates, photos, and stories if I have them.

My sister's daughter is expecting a daughter of her own in February, and she would be my parents' first great-grandchild if they were living. With another generation, it seemed to me that I might record what I could in case the little one, one day, wonders where she got her love of shoes. We have shoe-makers back in the early 1800s on both sides of the family, in Thirsk, Yorkshire and Lubenham, Leicestershire. My great-niece might like hats, and there were Moon relatives who made bonnets in Canterbury 150 years ago. She might like to grow things, and could blame the several farmers directly back in Colne, Lancashire during Queen Victoria's reign. Yes, I want to spend some of the near future in the past, as it is a pleasant way to spend the present.

Summing up 2008: It has been a terrific year since 28 April when I collected Cailean. I'd had severe bronchitis for a few months before that, and was on the underside of my mood line. I've now walked off 30 lbs, mastered my high blood pressure after 15 years, and started writing again (a dog is a perfect audience or focus for a writer). I'm cooking and baking. I'm rereading books I first tackled 40 years ago with a view to understanding why they appealed so much, how they might have affected me, and I'm pleased, so far, to find that I wasn't spending my time reading rubbish. I may look ten years older than I did in 1967, perhaps more than ten, but I still find some magic, some wonder, in the books it seems we were all reading back then. We were so cool. I think those books served us well. Odd that my Counter Culture of the 1960s was reading the books of the 1920s and 1930s. What do the young people read today? Where do the children play? 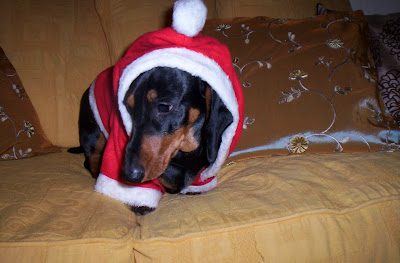 oooo, i love the top pic, and 'heathcliff walking his ferret' made me nearly pee. what a glorious dramatic sky!
it sounds like a good year and a delightfully social christmas season. we've got our tree up, baking has begun, and it's time to make homemade eggnog!
:) khairete
suz

Chuckled at Heathcliff and his ferret. Now that you mention it . . . :>) But it is a great photo and the vignette affect makes it moody and mysterious. The poem fits.