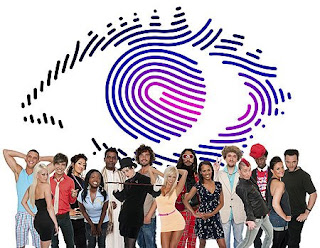 THERE ARE NOW OVER 30 CCTV cameras within a few hundred yards of the flat where George Orwell lived when he was writing 1984. I'm guessing that does not include the cameras on buses and in some other vehicles. Of course, there are cameras mounted outside buildings everywhere, and in shops. It must be increasingly difficult to get away with murder.

I recall a very few cameras in Hyde Park about 40 years ago which seemed to be quite obvious and intrusive. I don't notice the darn things now. There are a number of them here in Amble by the Sea which may, or may not, be switched on. A friend had his shop vandalised, a brick through the glass door, and a CCTV camera on a building directly opposite had no record of the crime. There is a sign in the window of one of the funeral parlours in Amble warning CCTV is in operation and that footage of any illegal activity will be passed along to the appropriate bodies. Bodies? All the buses seem to have cameras now; they look a bit like the HAL 9000 outlets.

In a bigger city, apparently, one might be recorded over 300 times a day. Something to think about if you're on a hot date and your wife doesn't know about it. Suddenly somebody commits a crime and you and your companion are taped witnesses and the Police are looking for you.

My youngest sister boasts that she and her son frequently climb over or under pay turnstiles to save a few pence. One day she'll be nicked when the authorities aren't watching possible terrorists and have to meet a quota.

There are now CCTV cameras that are manned full time by security officers who can, and do, speak to the people they are observing if necessary. "Would the chav in the tracksuit please pick up the cigarette packet she just dropped?"

I once applied for a job with a security company, to work nights monitoring a bank of TV screens and alarms. I lasted one trial night, it was a horrible experience. Boring beyond belief. I should mention that I was unable to communicate with anyone who appeared onscreen. If anything was dodgy, I was to telephone the Police or other emergency services. I believe I had only one event that night, an open window in a building that was supposed to be sealed shut.

In 2007 I watched Big Brother 8 UK on Channel 4 from time to time. I'd never watched one of those reality captive shows before and it was somehow compelling for a while. I actually remember a few of the contestants and the eventual winner, Pete, who was notable as he was a pleasant punk with Tourette's syndrome who twitched and ticked and screamed (usually Wankers!) a good deal. Pete was involved, in the Big Brother House, with a daft girl called Nikki. Nikki complained about everything and her shrieking was a match for Pete's outbursts. Both Pete and Nikki, whose attachment did not last after the series ended, continue to appear on the television as guest panellists and commentators.

Last year, 2008, the Big Brother Housemates were a dull and forgettable lot. The only thing I recall now is that a skinny and incredibly naive boy from, I think, Wigan, called Luke, was somehow paired with a large, slightly older woman with enormous boobs, which she often flashed at her fellow housemates and the Big Brother cameras (and those of us daft enough to be watching), called Rebecca (Becks for short). They both got voted out of the House within a few weeks of the show starting and I stopped watching. Luke and Becks did pop up as commentators on this year's show and they are, they say, still an item. Some things one doesn't like to picture…

Three weeks ago some 16 people ranging in age from 18 to just over 40 moved into the Big Brother compound. I don't know how many weeks these things run, but it will be through the summer. Of the 8 males, 3 admitted to being gay-bisexual; I believe at least two of the 8 females bat for the other team. I'm not sure that 5 out of 16 is statistically representative of the sexual preferences of people in Britain. It seems that this year the producers decided to go with camp.

Two contestants have been given the push and one simply walked out of her own volition. Another contestant didn't earn the right to be a Housemate. There are now 7 boys and 5 girls circling each other, plotting and trying to look appealing to the viewers who vote them in or out.

After three weeks, the Housemates are all horny and tetchy. Indian lad, Sree, is stalking the prettiest girl, Noirin, who clearly detests him. Kris is courting Dogface's huge knockers. (Dogface? She had to change her name to stay in the House. Another contestant is now called Halfwit.) Charlie, a former Mr Gay UK runner-up, is getting attention from the boys and girls (including those who are supposed to be straight). The youngest Housemate, Cairon, from Atlanta, Georgia, was evicted last week. He'd been very homophobic, and awfully immature. He then shoved a peeled banana up his arse on camera. Over 70% of the votes to evict went to him. He earned them!

There's no censorship on our Big Brother. Language has deteriorated rapidly, nudity is becoming common, and the snogging may soon lead to sex for the cameras if the show moves along like those in other years. The boy on boy action is prevalent this go round, even among the straight lads. Whatever gets you through the night?

All of the contestants this year have been quite attractive physically, though Dogface's breasts are a bit over-inflated (they are implants and she wants bigger ones, a mindset I cannot understand). I like only two of the Housemates enough to hope one of them might win.

Angel is a Russian girl in her 30s, a boxer, trainer, magician and would-be pop star. She's wonderful looking. Not beautiful, but wonderful, better somehow. Angel is fairly fragile for an athlete, when the House gets to be too much she heads for the garden with her jump rope. Angel breaks down and cries too, but offers a shoulder to the other Housemates. If I were 20 years younger…

Halfwit, whose real name is Freddie, is an upper-class twit, complete with a stately home and boarding school education. He wants to be a Tory politician. Halfwit has something fairly interesting to say about everything. The other Housemates, proles all, perhaps not surprisingly, detest him and keep nominating him for eviction. So far, Halfwit has survived because the other nominee has been less attractive to the viewers. He's a good-looking fellow, plays for both sides. He's English in a House that has mostly foreign types. I'd like Halfwit or Angel to win.

However, I believe the money is on Brazilian bisexual Rodrigo to take the title. He may turn out to be too boring as the weeks go by. Rodrigo is camp, but straight Siavash, an Iranian chap, is camper than a row of pup tents, and noisy with it.

As the weeks go by, I have no doubt that language, nudity and sex will decide the thing. The more graphic, the better the chance to overcome.
Posted by Ross Eldridge at 12:52

This is how I like to "watch" TV. Just tell me what's happened in a nutshell. That's enough. No need to really watch.

My husband has taken to watching Rome, and there seems to be several bouts of lovemaking per show. From the other room I can always hear from the grunts when they are going at it. Sometimes I go look, but once I just yelled, "Who's screwing who this time?" Turns out it was a fight, not sex at all, but from the grunts it was all the same to my ears.

(the deleted post was just this with a mistake . . . I started over.)

i recently had an old friend tell me she google mapped my house and how much she likes it. it makes me SO uncomfortable. i'm out there nakey scratching my hoo-ha at any given moment and i HATE that someone has to manually scrub me from the image that's being broadcast to anyone with a computer. it feels like a massive violation. but when i bitch most folks just shrug and say that's the age we live in, privacy is a quaint notion, nothing to be done. i suppose they're right. i frequently flip the bird to the sky, and it's not directed at gods, stars or vultures.
ruth, i'm dying to see rome! i wish my library would get it.
i also HATE the utter dearth of creative language in that vile venue, 'reality tv.' it's almost as if the only contest is to see how thoroughly one's comments can be bleeped into incomprehension. i think 'fuck' is a GREAT word and should be used with emphasis, forcefulness and respect. it shows complete moronic vacuousness to be unable to complete a thought without inserting random profanities throughout. it's profanity abuse. someone please save the endangered 'FUCK' from obsolescence and inconsequentiality!
khairete
suz

PS: Last Friday Angel and Halfwit were up for eviction and Angel got the push.