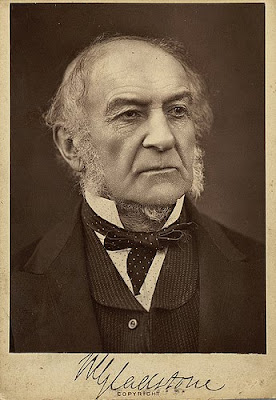 LAST WEEK I HAD A TELEPHONE CALL from a young woman. Hardly necessary to mention that the call came in the evening when I was busy having my tea and watching Coronation Street.

“Hello. Is this Christopher Eldridge?”

“I’m calling on behalf of the Liberal-Democrats.” She does not even take a breath. “What we’d like to know tonight is how you intend to vote at the upcoming General Election.” (One must be held before the end of June, likely date is 6 May.)

There followed a pause on my part.

“Mr Eldridge? Which party will you be supporting?”

“I believe,” I told the young woman, “that one’s vote is a private matter. It happens at the ballot box on Polling Day.”

“Oh,” she said, followed by a long pause. I imagine she was looking at her guidelines. “We just want to know who you will be voting for, Mr Eldridge.”

I said that I’d prefer not to tell her and as she was about to say something I put the telephone handset down.

I might have reminded her that William Gladstone, the Liberal [sic] Prime Minister, steered the bill that became the Ballot Act of 1872 through Parliament. Prior to that time voters had to mount a platform and publicly voice their choice of candidates to a recorder who would note it in his polling book.

Obviously that left the recently enfranchised working class (the Reform Act of 1867 had given some 1,500,000 men the vote, doubling the electorate) open to pressure from the employers who could, and would, listen in as votes were cast. I recall all this from my history lessons forty-mumble years ago.

The woman from the Liberal-Democrats on the telephone had my name, my 'phone number and probably my address. She might have known my age. This was not an anonymous opinion poll.

I offer this experience as a word of advice to my readers. One does not have to share one’s choice of party or candidates with family, friends, employers, one’s church, or with political parties. If the Secret Police turn up at my door, I am not compelled to tell them who I will be voting for in a few months’ time. (In North Korea the rules would be different, and perhaps in corrupt democracies propped up by Britain and the USA, like Afghanistan, as well).

I have been voting in general and other elections for about forty years. I have never joined a political party, and I have voted for both right-leaning and left-leaning candidates, but based on the issues and not ideology. When the candidates have been present outside the polling station, I have offered a firm handshake to all and sundry with no nods and winks. I say I’ve never joined a political party and I should clarify that. I once sent a £10 donation to a party to help fund a project that I believe in. But I carry no membership cards.

I once helped a friend sort through a box of index cards on which was gathered information on all the voters in a political district in Bermuda. The cards were compiled by one of the two major parties then operating in Bermuda. The prospective voters were not contacted and asked for their choice of candidates. The names on the cards came off the electoral roll, and then a committee tried to figure out which party the voter might support based on his or her address, surname, and any information that might be gleaned from other sources. One thing noted on the cards was the voter’s race. This was not written down as black or white (the two parties being different mainly by racial make-up). Some reviewer simply made a mark with a coloured pen on cards of voters who were thought to be non-white. As I recall, my friend was updating the cards. Perhaps a voter had moved to a more upscale address and might be judged more conservative. New voters would be added and dead and departed people would be pulled from the box.

In Bermuda one was always for one party and, logically, against the other. It is a bit like that in the USA, I gather. In Bermuda one does not take fire at (or make jokes about) both parties and leaders, one takes sides. Comedy and commentary is one-sided.

In Britain we tend to have a go at everyone, regardless of political identity. Thatcher and Blair are remembered and hated equally. ("What the hell were we thinking?") We all seem to feel no love for Gordon Brown (Labour), David Cameron (Conservative) and Nick Clegg (Liberal-Democrat). After the expenses scandals we dislike and distrust all the elected MPs and the appointed Lords.

We are a country at war in Afghanistan, and one worries that politicians resort to war when they are having a hard time on the home front. The Second Falklands War might be inevitable with the Brits and the Argentines wanting diversions from economic crises. The candidates from our three major parties are not promising us war or peace, advance or withdrawal. We are getting no firm policies promised, things change on a whim. There is no candidate who will say what he really stands for; he’s too busy shuffling his feet over revelations in the press.

Unlike the United States, we do not have Oprah Winfrey or Pat Robertson to tell us who to vote for. Oprah imposes her will by throwing a party for her party and injecting a degree of hysteria into a campaign. Robertson’s God stares out through the broadcaster’s eyes and dares White Christian America to defy Him. The parties are basically Gay and Straight.

Britain is essentially a non-Christian country if votes are tallied. The BNP (British National Party) which is far-far right, and seeks to keep Britain British ethnically and racially and culturally, is probably the closest we come to a Christian party. There is, somehow, something of Pat Robertson in the BNP’s Nick Griffin, though Pat Robertson is probably less likely to approve of cross-burning, and Jew-baiting, and the eradication of deviant homosexuals and democrats.

What is outstanding is that one might be a Gordon Brown Labourite, a Liberal-Democrat supporter, High Tory, or a friend of the BNP. One might intend voting for the United Kingdom Independence Party (UKIP) to get Britain out of the EU. One might be voting Green. There was a Party of Jesus Christ in the last election. We even have The Monster Raving Loony Party if you fancy wearing a funny hat. We don’t seem to go for dyed-in-the-wool blue or red here.

The important thing is, thanks to William Gladstone, we have the secret ballot. We have the ability to vote our consciences. No political party worker has the right to quiz us and to mark boxes alongside our names. No man can threaten us unless we actually choose to take up a banner and march in the street. To decline to vote is to refuse an important right: The right to be part of society. No one candidate will meet all your needs, but an unselfish look at the issues and vote on what is best for the most might be satisfying.

Vote! You need the exercise!
Posted by Ross Eldridge at 12:43

Don't tell indeed! Wise advice for dangerous times. I am an utter neophyte when it comes to the vote, although I've participated much more these last dozen or so years—more so then I did in my first dozen or so years past the age of majority.

I never mind answering those pollster people, although all my voting for the past ten years or so has been absentee, and I don't have to answer the phone or the door anymore. But, as you know, I'm a political junkie. Love the stuff.

I imagine those poll people are having a harder time of it what with all the people who use a mobile as their primary communication device.

I thought Obama's 2008 presidential campaign was very smart about getting the kids to text in a reply to a question, thereby gaining their numbers.

If all you'd posted was Alan Bennett's quote, you'd have made my day. But the rest of your comments completed it.

I just finished a little book, a mere 100 pages, called The History of Lies. I'm doing a brief review for the Internet Review of Books. It's written by Daniel Nanavati, a Brit... and the humor is delightful. His chapter on the lies of politicians is interesting, funny, and cheered me. Misery loves company, you know.

Anyway, I guess you can always be suspicious of telemarketers who ask for Christopher. I go by my middle name, too, an when someone asks for Lillian... I just know they aren't a friend.

i'm a poll whore and lovelovelove to give my opinion, to the point where i have to restrain myself from giving it unsolicited. but pollsters have asked for it! i used to have the fond notion that what i shared mattered, and mostly that i might be a small voice in the american republican party trying to woo it back to sanity.
now i've decided i'm just a poll whore and do it cuz i think it's fun.
:) khairete
suz