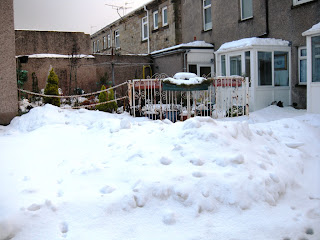 O, who can hold a fire in his hand
By thinking on the frosty Caucasus?
Or cloy the hungry edge of appetite
By bare imagination of a feast?
Or wallow naked in December snow
By thinking on fantastic summer's heat?
William Shakespeare (Richard II, Act I, Scene III)


LAST NIGHT I WAS SAT in the bar at a luxurious hotel in Santa Fe, New Mexico. It was warm outside; I was protected against the heat by air-conditioning, behind glass doors. I knew I was in Santa Fe by the view, adobe buildings everywhere, including the upscale one where I sipped some sweet cocktail.

I’m just getting over a bit of a bladder infection, and got up and made my way to the WC (they seem to be called Restrooms in the USA) to relieve myself. When I’d done peeing and washed my hands, I wandered over to a window and pushed aside the curtains. It was quite dark, though I could make out the shape of the terrace across the street in the dim street light on the corner. Snow was blowing along the street, from east to west, as it had been for about eight days. Looking down and out, my window ledge was under a foot of snow (still) and the pavement was shimmering with crushed snow and ice.

I’d not been drinking some sticky, warming concoction in a bar. There was a mug by my bed with the remains of some hot cocoa (now long cold). I grabbed the mug and padded out in my bare feet to the kitchen, stepped into the back porch (no insulation on its roof, it is colder than Main Street in Park City, Utah, in January), reached into the cupboard that contains the controls for the boiler, and flipped a couple of switches. Back into the kitchen. I ran hot water, nearly boiling, into the kitchen sink, and rinsed my mug. That done, I filled the mug with milk and put it in the microwave for exactly 3.50 minutes. That gets it just boiling.

While the milk heats in the microwave, I hitch Cailean up to his harness and lead and push him out the front door. The back door (pictured this morning) is now blocked by snow. Cailean takes two or three tiny dachshund steps, squats, and widdles and runs back inside. Just as I put the small measure of Cailean’s breakfast into his bowl, the microwave makes its five loud binging sounds. I add an artificial sweetener tablet and a spoonful of coffee to the boiling milk. Then we go back to bed till seven, by which time the flat will have warmed up.

I get up and have a shower at seven o’clock. Cailean stays under the duvet on the bed until sometime after ten if we are home for the day. For the past eight or nine snow-days, we’ve been very much at home. I usually get a text or telephone call early in the morning from someone checking to see if I’m okay if I'm not collected to go out at the usual 8.00am.

I don’t eat breakfast if I’m at home. If I go out for the morning, or for the day, I will get something to eat while away from Cailean. He’s on a diet and if I have a meal in front of him (never mind he’s had his weighed-out portion of Adult Diet Lite Chow) he gets awfully anxious and whines a good deal. This spoils my enjoyment of my bit of toast, or bowl of cereal.

I’m writing about the days at home today, rather than my days out, as my longest journey has been to the pet shop. That same morning I got a haircut. Five aging men waiting for the one barber to clip her way through us. Waiting in the tiny barbershop. It was lovely and warm, almost steamy, and one could watch the telly or the snow blowing into the doorway at the bank across the street. The bank has been unable to open as the required number of staff for security purposes cannot get to town with the roads impassable. The girl in the barbershop lives only doors away, and was content to manage without her colleagues.

Our minimart has been getting food in irregularly, and each arrival prompts panic-buying. At times there’s no dairy or meat, no vegetables, but plenty of Cheerios boxed cereals and Kleenex tissues. Rather eager participation in the Lotto; I dare say people are thinking their first million will buy a house in the Seychelles.

I plodded along to the minimart this morning and managed to get fresh strawberries, freshly-made soup, pasta filled with buffalo mozzarella and salad greens. I also bagged two cartons of 1% milk from a dairy down in Yorkshire. Usually I get my milk from a Scottish concern, which is closer than Yorkshire, but right now one gets what one can. Yes, I got a Lotto ticket. If I win the £12,000,000 tomorrow, I’m not going to the Seychelles or anywhere overseas. However, I might pack a bag for myself and Cailean and have a week or two in a posh hotel ordering the fun beverages one might get in Santa Fe. “A tequila anything, if you please, with a wee umbrella. And a dish of pistachio nuts. Rawhide bone for my companion.”

I may well see snow from my hotel window. Unlike by flat, I dare say I could request that the heating be on before I wake up. No wandering in the near-dark to get the boiler fired up. And surely, for all the money I’d have from my Lotto win, there would be a place outside for Cailean to toilet that did not involve jostling with polar bears.
Posted by Ross Eldridge at 13:02

oh, bolphie! i'm shivering just reading this!!!!!
i saw flurries yesterday for the first time. i hope we don't get nailed the way we did last year. but you already have!
:X khairete
suz

I know you write about "place" -- about your location or about places
you've been. Here's a venue I found (regrettably nonpaying but a good publication) that's looking for submissions. I sent 'em one of mine, and it was accepted for this special issue.