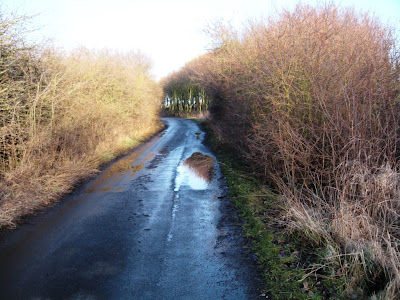 The mind is like an iceberg, it floats with one-seventh of its bulk above water.
Sigmund Freud (1856-1939)
I MUST HAVE BEEN NO OLDER than five when I noticed the rain rushing down the driveway in my mother’s garden at such a volume that it could not be absorbed or carried away quickly enough to keep it from flowing into our garage. In Bermuda we had sudden rainstorms, often with extraordinarily violent thunder and lightning, and if the Island had been having one of its frequent droughts, the ground would be packed down as hard as concrete. All moisture would puddle and flow, absorption might happen gradually, and saturation would take a great deal of time.

And I crouched in my bare feet, in my Bermuda shorts, in our garage as several inches of water collected on the rough cement floor. The water, I recall rather well, was warm, and there were bits of sand in it. It had a slight texture besides that of pure flowing water. I found some pieces of wood, remnants from the roof beams of the garage (it had been only recently constructed to replace an open trellis with stephanotis vines on it that did nothing to protect the car), and tried to get them floating. Some were too heavy, some too thick, to sail about easily on my own private inland sea. Some, however, became ships and boats.

As the rainwater continued to drain into the garage, the currents within it would move my wooden ships about. No need for me to guide them with my hands. Like some sort of lazy god I could watch my creation work itself out. Some of the ships sailed safely to ports within the garage, others snagged on the uneven parts of the floor, and a few were carried right out of the garage door and down the driveway to the lower road behind our house.

Many of my Eldridge relatives have served in the Royal Navy. A cousin is an officer in what remains of Britain’s navy at this moment. It is worth noting he was on HMS Manchester last summer when she was sailing off the shores of Bermuda during Hurricane Igor, in case the Island needed help when the storm had passed. As it happened, no help was requested, and one assumes none was required.

The closest I have come to boating was a spell of rowing a relative’s punt (called Swampy) in Hamilton Harbour on a weekend. My plan was to build up my scrawny body. It did not help.

On my travels I have seen a good deal of water, salt and fresh. I have sailed across Lake Michigan on a car ferry to Beaver Island. I have driven up a fairly shallow stream in the mountains above Salt Lake City in a Ford Bronco SUV, which was hardly kind to Nature. One of the most incredible rainstorms I have witnessed was in Hurricane, Utah, in about 1994. That is a desert area, usually dry as a bone, where tumbleweeds rolled down the gravel-coated Main Street and orange dust blew about and coated everything the colour of the landscapes in John Wayne’s western movies. One afternoon I was in a car with a friend at the junction of Main and State Street and a microburst opened above us. We pulled over to the side of the road and slowly moved into the parking area outside a Taco Time fast food outlet. The world vanished as the rain poured onto the Hurricane Valley, and in a minute there was a foot of water on the roads and low-lying areas in the centre of town where we were attempting to shelter. If the water had been much deeper it might have been a flash flood, but it was able to move quickly enough to even lower ground at the south side of town. Still, it was rather exciting, rather frightening.

Having lived through several major hurricanes in Bermuda, complete with tornados and water-spouts and deluging rain, I can answer the frequent questions I get regarding the Bermuda Triangle with my general theory that it just happens to be a part of the western Atlantic that has frequent and often sudden storms, and it is a busy area for shipping and air travel. I’m almost certain that there are no more UFOs near Bermuda than there are anywhere else. Wind and rain happen, waves happen, things go down. 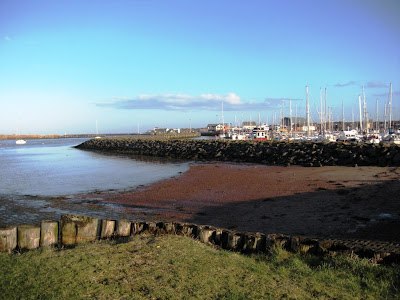 Last Wednesday we had a spectacular day. It was so bright and sunny, and fairly warm, that we took the dogs for a walk by the River Coquet. We even sat in the sun and talked about the sparkling light on the water in the River and out towards the Harbour entrance. The dogs ran about at the end of their longest retractable leads and returned with clean feet. The bank of the River has been under ice, snow or mud since last autumn. This was the first walk there since then.

Since Wednesday, we have had steady rain. It is snowing on higher ground, but we’ve only had some sleet on the coast. Howling winds. Dark skies. Wet footprints (dog and man size) in the hallway.

To summarise: Summer of 2011 was on 16 February this year, and it was lovely.

This afternoon we went to lunch at The Fleece Inn up in Alnwick. The landlord opened the doors at noon and had a coal fire going. On a cold, rainy day this was appreciated. It is an old pub, full of character. It happens to have a men’s toilet (the Americans might call it a restroom) for customers only (reads the sign) that is the most hideous public bog I have ever come across. The walls seem to be running with moisture, the urinal is along two walls with a stinking trough at one’s feet, and the red-tile floor is puddled. The single cubicle does not lock. I am rather surprised that a business would present itself so badly, even if it may be that most of the lads who use the toilet are off their faces and cannot focus on anything at all. I can only guess that the toilet is so ancient that it is “listed” and cannot be renovated or replaced; it is caught up, trapped, in history. I like history well enough, but I don’t care to paddle across a toilet’s floor to reach a smelly urinal. To use the cubicle, to actually sit on the commode, one would have to push on the door with one’s feet to keep it shut while one did one’s business.

It is a little after five o’clock in the evening. I woke twelve hours ago having a peculiar dream about North and South Korea. In my dream the North had finally lobbed some sort of nuclear bomb at the South. It has not been mentioned during the day, I’ve not watched the telly though. I imagine the booming wind and the rattling sleet on my windows at daybreak may have turned my dreams to thoughts of war, or my thoughts of war to dreams.
There's high, and there's high, and to get really high -
I mean so high that you can walk on the water,
that high-that's where I'm going.
George Harrison (1943-2001)

It’s full moon just now and the water in the Estuary is as high as I have ever seen it, perhaps a foot more and the road to Warkworth will be awash. The pastures on the other side of the road were puddled this morning, and are pond-like tonight.

The sky is dark as I write this, the rain is merciless. I know there’s a spring and summer out there. The snowdrops are up and blossoming, the daffodils are several inches high. We don’t really do crocuses up here, not the way they do in, say, Hyde Park. We will have wild bluebells and then the cultured plants. I usually invest in daisy-like seedlings and petunias. Most years I am inundated with flowers on my side of the courtyard.

One has to remember all that when it is this grim. In this Water World.
Posted by Ross Eldridge at 17:32

Your blog entry reminded me of the little boats we used to make when we were little.

We'd find a good piece of Ponderosa bark, curved suited us best although it couldn't be too curved or it would sink. Then, we'd spend most of the day scraping sticky pitch off the trees. I'm sure our clothes were a mess and our parents probably had to use gasoline or something to clean them. Once the boats were piled high with pitch we'd wait for night to fall. We'd light them on fire and float them down irrigation ditch, poking them away from the bank with long sticks. At the end of the ditch was a waterfall, and if your pitch boat made it over the falls, well... you won, of course. Loved to do that!

Your summer sounded divine, Ross. Glad you got out to enjoy it. Happy birthday to Mr. Cailean and best regards to his caretaker.