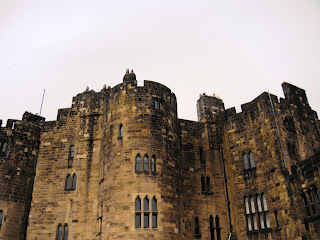 The years between 50 and 70 are the hardest.

You are always asked to do things,

and yet you are not decrepit enough to turn them down.

A FORTNIGHT AGO, some old friends of mine (so many of my friends are old now, and this is what keeps me so young) on their first trip to Great Britain arrived in my part of this other Eden.

Sue and Dave had driven up from London, taking a few days, with a stop in York to visit the Minster. I can tell you that some of these single attractions are alone worth the flight from the New World back into time and place. They had spent a good part of a day at Westminster Abbey in London padding about between poets and headless queens.

I have been visiting many of these historic sites for over 50 years, first in the care of my Nan Eldridge who knew what is what and how to get to what is what. Those were early mornings in the forecourt of a coach station, with a bag of sandwiches for our lunch. A muddle of people, most of whom seemed as old as my Nan, which is to say truly ancient, would gradually make their way to the appropriate gate and form a queue. Of course, these fossils, these relics of another age, survivors of the war and peace, were not, in fact, as old as I am now.

Once on board the coach, we would fiddle with the air vents, and I would look out of the window to watch familiar places fall behind us. Then, at about nine o’clock, everybody on the bus would open his or her boxed lunch and eat every crumb. At ten, the driver would pause at an inn somewhere for a toilet and tea break. Nowadays, the word to politely cover this is a “comfort stop”. We all watch full-frontal nudity and listen to shocking language on Channel 4 in the evening, but prefer not to be troubled by anything that hints at bodily functions.

I have a toilet story. A year ago, Sue’s brother, Richard, was in town on his first visit. We took the train down to Durham for the day and after a while I needed to use the toilets (Richard, in Utah, would likely call them restrooms) and we found some at the bottom of several flights of stairs in a small shopping mall. I left Richard at street level and followed the signs downwards.

It was a very nice, clean toilet. A few others were using it when I arrived. I went to the row of urinals and unzipped my flies, as one does. There was one other bloke at the urinals as Richard appeared. He had decided he had best get some comfort. I did not appreciate that it was Richard, last to enter. I finished, headed quickly to the sink, and then climbed the stairs back up to the shopping mall concourse. No Richard. I decided to stay in place and wait for him to reappear, thinking he might have gone into one of the shops.

Richard trots into view, from the door down to the public toilets. He indicated we might move along, seeming a tad flustered. Turned out that Richard had, while peeing, thought the fellow a few bowls along from him was I, and with the stream of urine being plentiful and powerful, Richard had remarked on it. “Nice and steady there! You won’t be having any prostate problems for a while.” Then Richard realised it was not me, but a complete stranger. 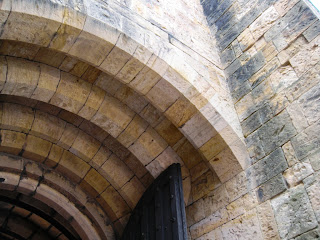 When Sue and Dave rolled into Alnwick, where we had decided to meet for a walkabout and to visit the Castle (I had taken the bus up from Amble), they were coming from Otterburn, inland, and were directed by their Sat-Nav to the Pottergate entrance of the Castle. I had disembarked on the far side, where the Alnwick Garden entrance is. One has to walk across some fields to enter the Castle.

We each expected to find the other in the same gate area of the Castle, but were on opposite sides of the massive building. Thank heavens for mobile telephones! I think that when I phoned Dave’s mobile (he would call it a cellular device) the call might have looped across the Atlantic Ocean to Maryland and back. No matter how well travelled our telephone signal was, we talked ourselves into a common area outside the gift shop.

There was a younger woman, perhaps 25, behind the counter in the ticket office. I approached, smiled, and asked for a single ticket for the Castle. The young lady smiled back and whispered something to me.

I am hard of hearing, and am presently using a temporary hearing aid before being fitted for something more powerful in July. I said to the counter person: “I’m sorry, I cannot hear too well. Might you repeat that?” Another whisper. Another: “Sorry. Louder.”

One might be forgiven for misunderstanding what I was being asked in this whisper. The woman had said, a few times before I understood clearly: “Are you a grownup?”

I had ID, and I was wearing a grey beard, bifocals and a hearing aid.

“No. That is okay. As a grownup, you get a concessionary entrance ticket.”

Therefore, I was charged a pound or two less than the many visitors a few years and more younger than I am.

It is good to be a grownup!

I am suddenly reminded of something that happened over 40 years ago. A friend (a young friend then) and I had gone to the cinema to see the recently released (and much hyped) film “Bonnie and Clyde”. We thoroughly enjoyed the picture (I have never seen it again, and do not know if it has held up at all well) and came out into the chilly night air, lighting our cigarettes and pushing through the crowds to get to the parking area.

And we walked straight into my mother’s parents and some family friends, a couple not much younger than my grandparents. They would all have been around the age I am as I sit here typing this account.

My mate and I were positively bubbling with enthusiasm about the bloody gangster film we had all just seen. My grandparents and their friends looked quite deflated, shocked even.

“We thought it was just awful.”
“We had expected it to be a Scottish musical.”

I am wondering if my grandparents, who would have been “grownups” by the current definition at the ticket desk at Alnwick Castle, would (40+ years ago) have got a discount on their theatre tickets.

Are there any attractions, such as historical sites, places of worship, films, plays, and books, that one can gain entrance to at a mutually agreed rate? If the Tower of London knocks one’s socks off, might one happily pay the full admission price (or more)? And if Owl World disappoints, can one ask for a few quid back (to spend in the pub)?

Alternatively, shall we just have the young, and grownups?
Posted by Ross Eldridge at 11:33