Busted: A Transport of Delight 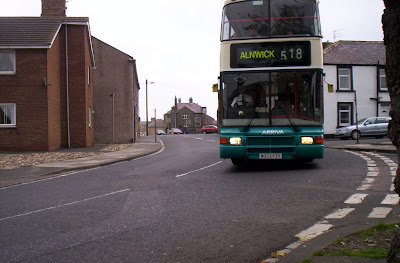 Oh, they used to laugh at me
When I refused to ride
On all those double-decker buses
All because there was no driver on the top.
Sung by Joni Mitchell (Twisted)

I HAVE NEVER lived as close to a bus stop as I do at present. The 518 linking Newcastle and Alnwick (pronounced Ann-ick) runs past my front door, as does the 420 that travels back and forth between Ashington and Alnwick. The actual bus stops are a matter of short yards away.

The 518 tends to take the coastal road to the north of Amble, turning inland at Alnmouth (pronounced Alan-muth) Station. You can link with the trains, in theory. I've tried it. It's still a theory. To the south of Amble, the 518 swings slightly inland to Morpeth, and down to Newcastle's Haymarket Station. It's a fairly picturesque ride in summer, especially from the upper deck. Summer, in 2008, was two days in August, so book early as seats are limited. The views are far less picturesque on the other days of the year as the mud has usually risen half-way up the side of all the buses.

Alnwick Station is a miserable spot. It is sheltered only from the worst of the north wind, but open on three sides. There are a very few iron benches guaranteed to wreck your spine. They are constructed to make sleep on them pretty much impossible, which makes me wonder if Alnwick has a homeless problem. There are people wandering abroad? Keep 'em wandering! The station in Newcastle's Haymarket is rather old and charming, and enclosed. No doubt it will be pulled down one day and something hideous and uncomfortable vomited up in its place. If that happens, perhaps Alnwick could purchase Newcastle's bricks and stones and rebuild that station up the country. Visitors to the Alnwick Gardens and Alnwick Castle (Harry Potter's 'Hogwarts' interiors were filmed there) would love a reconstruction. God knows, Americans have bought up old castles and chateaus and (famously) London Bridge to grace the deprived New World.

Bus stops in between the towns range from simple poles with acrylic covered panels showing a timetable attached, to basic steel-and-glass shelters, to brick cubbies. I get on and off at a sort of non-existent stop at Hawkhill Farm somewhere between Alnmouth and Alnwick. One must walk up to the driver in time to ask him to stop "by that gate" if on the bus. If waiting at Hawkhill for the bus, one must step out onto the highway and flap about a bit to draw the driver's attention. And pray you get it in good time!

The 420 buses only come to the coast in Amble, and tend to stop at every odd spot on country lanes. This means that in bad weather they may well be sloshing about on rough roads. Shilbottle can be a bit dodgy. The locals in Shilbottle with a sense of humour take magic marker pens to the Shilbottle signs and cross that first l to make a t. Shitbottle.

The 420 from Amble to Alnwick takes about 35 minutes, the 518 does its route in 30 minutes. Roughly. There might be an injured badger to navigate around on the 420's country lanes, or a language difficulty with boarding Japanese tourists in Alnmouth Village on the 518. Badgers are easier.

One can take one's wheelchair, one's dog, or one's luggage on the buses at no extra charge. The newer buses feature wide double-doors and the ability to lower the floor to the level of the pavement. In theory. A wide aisle and a designated place for one wheelchair are available on these buses.

The 518 and 420 routes feature double-decker buses for the most part, in shades of aqua with advertising on panels, until recently. I have spotted several red London-style buses. All since a rather fun Christmas party, actually. So, I think I've seen red buses recently. Don't take my word for it. There are sometimes single-decker buses on the 420, usually, it seems, when more space is required; and those buses must be a real bother for people with walking difficulties as they are high off the ground, perhaps three steps up.

I carry Cailean on my lap on the bus. He's a small enough pup. He usually puts his nose in any gaps between seats to study the other passengers. With his friendly nature, he's not really a problem. Any fuss is a good one.

The passengers can be of any age, but tend to be OAPs shortly after nine o'clock in the morning when they can ride for free. OAPs are Old Age Pensioners: people over 60 with a bus pass. These OAP passengers have been nicknamed "The Twirlies" because they ask, if it is only just nine in the morning, when flashing their pass to the driver: "Am I twirly?" Schoolchildren have specially designated 423 buses on the 420 route, and ride the regular 518s. One should plan to avoid those buses when the children are travelling. Children rarely give up their seats these days, it seems. They do, at least, tend to sit upstairs. Noisily.

I very much enjoy riding the buses here. I'd like to sit upstairs all the time, but it is awkward, if Cailean is with me, manoeuvring up the twisting steps to the top deck, even if I carry him. It's a shame, as we'd both enjoy the view.

One could populate a novel with characters from the buses, and fill pages and pages of dialogue with overheard conversations. I do make notes at times. Always (I tell you) carry a notepad and pen with you if you write as much as a letter to Nana once a year: buses are a gift horse.

I particularly like the older folks, the seedy ones. The few left who are older than I am. Plastic Macs, the little old ladies bent low with osteoporosis and a week's shopping in string bags, knitted woollen hats over wisps of white hair, thick stockings and sensible shoes. In America these women would be redheads and wouldn't be on the bus, but driving this year's Cadillac. And men, not so bent, just shortened by life's loads (and in Northumbria that could well mean coal), in well-worn overcoats, flat caps, nicotine-stained fingers and bad breath. Stinking of beer and smoke, no matter the hour.

On the very oldest of buses there are seats facing each other at the front. One rather wibbly-wobbly gentleman wearing a tweed jacket with some sort of military pin in the lapel clambered aboard the bus and sat in the seat facing me. I was facing the front of the bus. No, he did not face me when he sat down, but kneeled on his seat, holding onto its back, and off we went, his feet banging my knees. Get the picture? Some people simply must face the direction a train is travelling (and I am one of them) and that obviously extended to buses for this chappie.

An overheard conversation to end this piece. Two old ladies with bits of shopping from the Co-op discussing the son of one of them, a fellow who, apparently, was as daft as a brush. 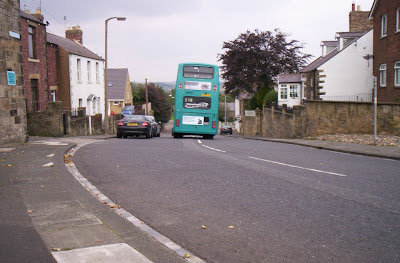 Ah, Joni is a craftsman (craftswoman?), but being co-generation, I would have guessed the reference would have been "Magic Bus" and The Who. (smile)

Is there sufficient passenger'age for a double-decker? Looks a tad unoccupied.

Roll up!
Roll up!
For the Magical Mystery Tour!
We're waiting to take you away!

Actually, the buses tend to be more than half full, even on the countryside routes, price of petrol keeps people from using their cars, and all over 60 travel free on the bus after 9.00am.