Writers With the First Name John 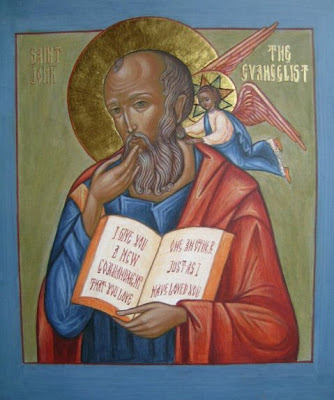 In the beginning was the Word.
Saint John
THE NOTED AMERICAN AUTHOR John Updike died recently, and I've come across no end of glowing tributes. I've paused during those that I've started to read because I especially recall not enjoying Updike's work at all during the 1960s through 1990s when I was reading a good deal of American fiction. I just didn't care about Rabbit; he was not someone I gave a hoot about. Is that wrong?

I seemed to read many novels by American writers with the first name John. I disliked Updike, and I despised John Barth's "Giles Goat-Boy" with a passion. I'd hated "The Sot-Weed Factor" as well, though I rather liked the titles and had both books by John Barth on my shelves. I borrowed Updikes.

Fortunately for authors called John, I really did enjoy the work of a number of others without reservation.

I struggled through John Gardner's "Sunlight Dialogues" but just loved "October Light" and if I still read fiction I'd be tempted to read that one again, if only for the apples in the attic.

John Irving bowled me over with "The World According to Garp" because I'd never read anything quite like it. I've read all of Irving's books that I've been able to get my hands on, and there's a lot of Garp in all of them. Probably a lot of Irving, rather than Garp. Transsexuals, bears, European pensiones, wrestling, giants and dwarves. My favourite book by John Irving is "A Son of the Circus" which is, perhaps, more unlike the others. I had to reread that one. American novels tend to run to many pages, which may or may not be connected to the USA having many trees on hand (or in Canada) to chop down for paper, and "A Son of the Circus" was long, but not long enough for me.

John Cheever was something of a guilty pleasure. I think Cheever was unpleasant and troubled, not least because of a difficult upbringing and marriage and his homosexuality. He was an alcoholic and terminated the therapy that might have eased his life (but might have dimmed his writing). He also had a male Mormon lover in Utah, which is remarkable. It's not a bad thing, is it, to enjoy the work of someone who is far more fucked-up than you are?

The brilliant John Nichols with his "New Mexico Trilogy" made my young adulthood a much better time. It's a shame that the film "The Milagro Beanfield War" couldn't begin to capture the magic of the first in the series of stories. To this day, whenever I see a small prop aeroplane overhead I picture a buzzard flying into the blades. That scene in "Nirvana Blues" is one of the funniest things I have ever come across in words.

Just so you know, I read John Steinbeck, and adored every word. When he wrote of the turtle meat twitching in "The Log from the Sea of Cortez" I first laughed and then my skin crawled and I never fancied eating turtle soup again, and I grew up liking it. We'd had Steinbeck read to us in school.

I did read non-Johns. I even read the massive novels of the likes of Stephen King (at first, "The Shining" scared the daylights out of me) and, different enough, Norman Mailer because Mailer sent copies to my grandmother and she didn't want to read them, but thought somebody in the family should. I liked "Ancient Evenings" and hated "Harlot's Ghost". I quite enjoyed everything that Truman Capote published, though I never much cared for the likes of him. Somebody said that dying young was the best career move Capote ever made. Yes, probably.

I think Bret Easton Ellis is something of a genius; you'd have to have a heart of stone not to laugh at "American Psycho". William Styron is a must-read, particularly if you know anything about depression. I'll confess I read the early Anne Rice "Vampire Chronicles" and loved them. I became jaded when Tom Cruise was so badly cast as the Vampire Lestat in "Interview with the Vampire", feeling Rice had lost control somehow. Money over matter.

These days I rarely touch fiction, except for the visual. However, I write down lines that I hear on the television that appeal to me and read them over and over. The other night I watched "Being Human" on BBC-3, which is a drama about a tormented spirit, a vampire and a werewolf that share a flat in Bristol, and noted: "Our former lovers linger within us like ghosts…" and thought that it was not only true, but remarkably well-phrased. At my age, I don't have time for 1,700 page novels.

Email ThisBlogThis!Share to TwitterShare to FacebookShare to Pinterest
Labels: books

How about another apostle? James (Jones, FROM HERE TO ETERNITY, etc.), Michener (too many to mention), James (Baldwin, GO TELL IT ALL THE MOUNTAIN), or turn it around and you have Henry James.

i'm so glad i'm not the only one left unimpressed by rabbit.
khairete
suz