Through the Future Darkly 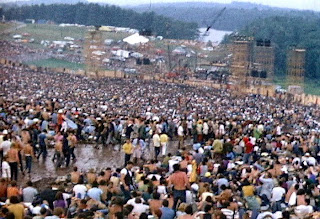 LAST NIGHT, 15 AUGUST 2009, I sat down to watch the three-plus-hours-long film commemorating the Woodstock Festival of 1969, forty years to the day later. I was almost 20 in August 1969. I was a college drop-out, working at columns of figures in an unpleasant office housing the forerunner to American International Group. I had quite long hair, a moustache, and tended to dress rather well. I thought I looked good in dark suits, pin-striped shirts, and polka-dotted silk ties. I only cheated with my shoes, using squeeze-bottle liquid shoe-polish rather than cream and brushes. I think it was laziness to use liquid shoe-polish; forty years on I rather enjoy the exercise and effort, the ceremony, of applying dense cream and then working on my shoes with brushes to bring up a deep shine.

As the Woodstock Festival was happening (it was a happening) in New York State on 15, 16 and 17 August 1969, we heard regular reports on the radio and television that updated what might have been the world on the trickle of music fans, hippies, American boys and girls, that became a rush. Max Yasgur's farm filled up and overflowed. The organizers had told the local authorities that 50,000 might turn up, and then it seemed that close to 200,000 would rock and roll in. Reports finally settled on 500,000, though tripping hippies could be heard to say, like, man, there are a million. One over-optimistic performer announced that there would be one-and-a-half-million by tomorrow.

In 2009 we'd have the ability to look down from spy satellites at a concert site and could pretty much count heads.

Looking at the film Woodstock last night, I was reminded that I was not at all a hippie back in the late 1960s. I never bought into the fashion, I liked British mod music, the last thing on earth I wanted to do was to listen to American music in the mud. The girls in the film look (as they did) rather plain, complexions like bread dough, unhealthy, with drab-locks haircuts they might have done themselves while not quite sober. Earth-people? Mud-people? Ugly. The boys look only slightly healthier, but they all look alike with over-long hair with no real style and scruffy beards. The unsteady girls might have cut the boys' hair too. A real problem arising from communal living: art suffers.

What happened to all those young men? Were they drafted? Sent to Vietnam? Or are some still living in Canada? Are their grandsons occupying Iraq? As far as the Vietnam War was concerned, I was on the side of the American hippies, the Peace Movement. My father wasn't, at the time, with worrying about the domino effect and the whole world becoming Communist.

Watching the film, I rather enjoyed some of the performances, which had excellent sound recording, if dodgy visual work. I got goose-flesh when Richie Havens opened with Sometimes I Feel like a Motherless Child. However, I thought The Who were weak, and Roger Daltrey's ridiculous rawhide string-vest is as horrible today as it was in the day. I liked Jefferson Airplane, but not Grace Slick's explosively permed hair. What were you thinking, Gracie? Exploring your African heritage? Jimi Hendrix, with Grace Slick's hair and Roger Daltrey's vest, pulled them off, and played himself into the history books as the greatest rock guitarist in history. Hendrix had The Star-Spangled Banner flow into Purple Haze. And Jimi was dead a year later at the age of 27; he has been dead for more years than he lived. Janis Joplin, also at Woodstock, outlived Jimi by a few weeks, dying aged 27 on 4 October 1970.

In 2009 the male and female performers would be wearing make-up (as might the concert goers of all persuasions). I like that for people on stage, it allows one to better see their features. The Woodstock artists looked as if they'd wandered out of the crowd and onto the platform.

Forty years on, just this weekend, British Prime Minister Gordon Brown, who I detest as much as I despised LBJ and Richard Nixon, has said that we must respect the memory of our Afghanistan War dead (we passed the 200 mark this weekend) by fighting on and winning the War. One of his generals said, within the last fortnight, British troops could be in Afghanistan another forty years. Who goes to war for forty years? Come on … It is absolute nonsense.

Gordon Brown has only one eye. I think the glass one is the one he uses to study reality. He is no hero in the tradition of Admiral Horatio Nelson.

One of Gordon Brown's supporters wrote in our local newspaper a week ago, in response to a letter calling for the British to get out of Afghanistan and stop feeding our boys into the war (which is to say death) machine. The Brown supporter said that if we did not defeat the Taliban and Al Qaeda, one country after another would fall to Al Qaeda (India, Pakistan, Iran, Saudi Arabia, Sudan, Northern Africa, etc), closing in on Britain and America. The domino theory again. In forty years' time I will be dead; I won't be celebrating 80 years since Woodstock. Will the British military still be in Afghanistan supporting a regime there that everybody knows is corrupt? When does an occupation lasting decades become colonization?

Would it not be better to tackle the reasons for the hostility felt towards America and Britain and most of the EU by Islamic peoples? Oh, Gordon Brown might say, it is only a fringe element, extremists. Then, I will say, give me a dozen Muslims in the whole world who are happy with Israel and its treatment of the Palestianians. Fix the problems, heal the wounds, make peace attractive at last. I honestly don't think we can mandate peace with armaments and misguided loyalties and Crusades.

The so-called Western Democracies, so long as they are pouring billions and trillions of pounds and dollars into fighting canny tribesmen with a miniscule budget and a knack for making Improvised Explosive Devices, are depriving those they claim to be saving of health insurance and services, educational opportunities, advances in science and technology, and the arts. In Britain and the USA there are potholes in the roads that look like those one might see in a war zone. Bridges are crumbling. The ocean is washing away the coast for want of barriers. Highways are unimproved and deaths result. Millions live in sub-standard housing. Millions are hungry. Is that our lot for the next forty years, Mr Brown, Mr Obama? Who is it that is winning the War?

david and i had a conversation earlier this evening that eerily echoed this.
we can't leave the afghans to fall under the boots of the taliban again. but we will NEVER win this 'war' militarily. all we can do is send our young (and not so young) to die there for us, in criminal futility. if the leaders of our countries are not ready to engage in deep, hard, intense political non-military solutions, we can only kill and be killed.
thucydides was right.
khairete
suz