All Things Bleak and Beautiful 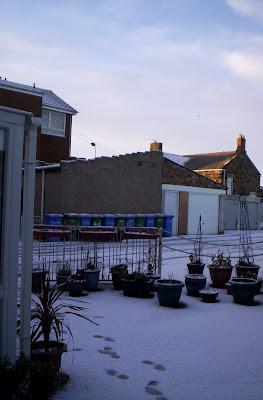 Alack, the night comes on, and the bleak winds
Do sorely ruffle; for many miles about
There's scarce a bush.
William Shakespeare (King Lear. Act II, Scene IV)

ONE CAN NOW COUNT CHRISTMAS in days away, and carded greetings have me thinking of family and friends as close as this block of flats, and as distant as Australia. My fireplace and mantelpiece look like the high altar in a church in Spain, bright and pleasantly garish. I've been playing the music of Hildegard von Bingen, performed by Sequentia, which seems perfect when our few hours of daylight are dulled with rain, and when there is frost on the moss that has covered paths, walls and fences and tree trunks in the months since the sun sank to the horizon.

Yesterday I went to my first Christmas dinner, at midday, of the season. About twenty-five of us had booked the Penny Black eatery in the old post office building in Alnwick. Three courses for £15.05, Christmas crackers and streamers included, beverages not. We had been to Penny Black a year ago, and had all been impressed. I'm afraid I was not quite so bowled over this go round, mainly because a man, possibly the owner or manager, seemed to think that he owed us entertainment over and beyond some gentle, seasonal muzak. Before the pudding was served, the manager interrupted our quiet conversations with some god-awful Christmas popular tunes from the hit parade at a volume that had me wondering when my brain would start bleeding out of my ears. I had a splitting headache before I finished my profiteroles. I don't (and didn't) drink alcohol, though I'm not necessarily a cheap date with lemonade at £2.40 a glass, so I feel certain the loud music was to blame. I decamped before coffee.

As I'd been picked up at my front door to go to Alnwick, I'd not dressed against the cold. I'd not fancied dealing with a scarf, gloves, hat, overcoat; I'd not even worn a sweater, the better to display my cheery tie (Trevor asked if it had a volume control…) When I left Penny Black, which had been plenty warm enough, no faulting the management over that, I immediately realised that it was not so much chilly as freezing outside. The Alnwick bus station is second only to Verkhoyansk when it comes to the title of Pole of Cold, and that's in June. My short socks suddenly seemed even shorter. So I quickly walked to the menswear shop I favour and bought a scarf and a sweater, both on sale fortunately. I figured my feet would thaw on the bus.

The 518 and 420 buses are usually dodging back and forth across the region, and only pause in Alnwick for a few minutes to discharge passengers, and reload for the return to Newcastle or Ashington. That means, even if the driver is finishing a shift, the bus is only switched off for a minute or two, and is warm inside. Yesterday I found a completely empty bus at the station in bay number 4. It had been sitting there for some time and had shed any heat it might have had. I boarded an icebox! Worse, when the heat did start to build up, it came from overhead vents, and my feet remained frozen.

This is, I suppose, a genuine excuse for a bout of depression and misery, but as we slid off into the grey world (it had been too dim for vehicles to go without their headlights the whole day) I tried to distract myself from my physical discomfort by studying the landscape outside.

I was surprised at how many coniferous trees and evergreens there are in Alnwick, all would have been planted intentionally. Most of the trees were leafless; a few of these had fairy lights in them, to encourage tidings of comfort and joy. Once we rolled across the A1 overpass, there were few trees, and nearly all barren. The fields were green enough, with a great many sheep huddled near windbreaks; a few horses wearing blankets stared out at us and I wondered if they slept indoors.

Quite a few of our passengers left the bus at Alnmouth Station. Bus meets Train, is the plan, though I've not found it to work so well. One long-haired and scruffily-dressed lad leaving us looked like a beatnik or hippie, complete with a bit of a pointy beard and a knapsack; he was also carrying a laptop computer in a case. Probably an astrophysicist, or a Facebook addict. He jogged down to the railway station where, almost certainly, he'd have to wait an hour for Bus to meet Train. It occurs to me that the platforms at Alnwick Station are colder than the Alnwick bus station when the wind is out of the north (and it was). Poor bastard.

The River Aln was running high, and the tide was in in the Aln Estuary, and all the rain had flooded the tidal marshes and fields as we dodged into Alnmouth Village looking for passengers. The North Sea was fairly calm, no sign of the beaches. The marshy end of the Alnmouth Village Golf Course was looking more like a lake, complete with waterfowl. All was submerged.

Once on the Coast Road, I appreciated how much rain had fallen recently, with fields well-puddled, some even flooded, and the road resembling a canal as we ploughed through water deep enough to splash up and over the bus's windows on the front and sides. Mostly-brown hedgerows and the green fields were turning brown as the already weak light vanished outside. The canopy of leaves that makes the drive in and out of Warkworth on the north side so spectacular was missing, making the roadway appear to be surrounded by gigantic thorns, which was beautiful in its own way.

Lots of Christmas lights in Warkworth, its pubs and restaurants seem to be surviving the recession better than those in Amble and Alnwick. Warkworth is a tourist trap, Americans and Japanese come thousands of miles to pose for pictures in its street, below the Castle. Swans are found on the River Coquet, underneath an ancient bridge, at any time of year. Might they be mechanical? (The former head of Disneyland Paris, a Frenchman, has been hired by the Duke of Northumberland to turn Alnwick Castle and Gardens into some sort of theme park … And the Frenchman says he'd like to include the town of Alnwick too … And I'm wondering about robotic swans, peacocks and deer, and the townsfolk hired on to dress like serfs, to re-enact the good old days of 1348.)

The Coquet Estuary was swamped, the tide as high as I've ever seen it, only feet from the road between Warkworth and Amble. Amble's few lights reflected in the water. Barren trees after the Welcome to Northumberland's Friendliest Port sign. Black slate roofs running with rainwater which is guttered onto the pavements, rather than under them. I've started to warm up after my half-hour ride home. My headache from the Holly Jolly Music is easing.

Cailean was awfully glad to see me, but not pleased when we went back outside briefly for him to pee. Inside for good, I drew the curtains, for the world outside was quite dark by then, and made the coffee I'd missed at dinner. Cailean slept next to me on the sofa while I read. The electric fire, fake coals in a small furnace, was a nice way to wrap up a surprisingly pleasant day in bleak mid-winter.

My neighbour just called out: "It's supposed to snow!"