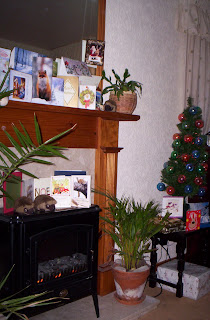 Unless we can think peace into existence we
- not this one body in this one bed
but millions of bodies yet to be born -
will lie in the same darkness and
hear the same death rattle overhead.
Virginia Woolf (Thoughts on Peace in an Air Raid)

A FEW DAYS OR NIGHTS AGO I dared the snow to come. And it did, with considerable enthusiasm, particularly in the southern half of Great Britain. Northumberland seems to have had a good deal, but it has turned to ice and the temperature has not been above freezing in almost a week. It is minus ten Celsius this evening. Damn!

Yesterday I managed to take Cailean for a walk in town, and even though he was wearing his winter overcoat, when we paused while Gavin got a Lotto ticket at the newsagent's, within seconds Cailean was shivering in the doorway with me, and trying to climb up my leg to be held where he thought it might be warm. We were standing in the ice. Cailean rather likes soft snow. Not the ice. I imagine it hurts his foot-pads. My nose was burning in the cold, my eyes watering, and my knees seemed to be colder than most of me.

Will this weather last another five days? Will we have a white Christmas? Will the Eurostar trains return to service in the Channel Tunnel? Will airports run on time? Will little children get to Euro-Disney for their holidays? If this week remains snowy, icy, all the rest may suffer. Can you have your cake and eat it?

There's been an over-hyped con-fab in frozen Copenhagen recently to discuss Global Warming. As one wit put it, "A good thing we haven't got Global Cooling, or we'd really be fucked!" He was looking out the window, I'm guessing. Or trying to find a public transport vehicle that was able to run, or a highway that wasn't clogged with stalled Lorries waiting to cross the Channel.

A word about Copenhagen. What a waste of time and money. Well, that's seven words. The non-result will be subject to so much spin control that we'll think that Obama and Brown have saved the world. Obama doesn't get out of bed to do less. I'm not sure that pollution is the main factor behind this supposed warming of the atmosphere. I'm not even convinced that our atmosphere, in total, is warming. Over decades and centuries and millennia, we have all sorts of climate changes. An active volcano can make a huge difference. A volcano in the Philippines is just about to pop its top. There's something satisfying about an event that the Americans cannot possibly say they can fix.

We won the wars for you, and now we're going to put a great big bung in Mount Mayon.

Population control may well save the planet. The Catholics and the Mormons and every other faith that promotes breeding without feeding need to get real and encourage birth control. Bombing villagers in dusty foreign lands and adopting polar bears ain't gonna save the world! Get real! Get real!

I'm enjoying the run-up to Christmas this year, even if the cold makes my nose run and my snot freeze on my moustache. It's like a holiday with Roald Amundsen or Ernest Henry Shackleton … More fun than Disney!

The earliest Christmas memories I have are of faces of Father Christmas drawn on paper, cheeks coloured red, and bits of cotton pasted where we thought a beard should be. My sisters and I each had one of these paper Santas and they hung on our trees for several years, along with lights that were filled with some liquid that came to a boil after a time (which frightened me, probably with good reason), and a decreasing collection of brittle ornaments. One year my mother could not afford to buy a tree, and this was before fake firs, and she cut a branch off a casurina tree in the garden. It was a total disaster, but the annual treats from family friends (Quality Street choccies) slid under the casurina.

I hated those Christmases. I hated the Christmas Eve dinner with my mother's family, even when I moved up from the small table to the big one. The food was always tasteless, and bought on a shoestring budget. If I never see another tinned ham running in jelly in this lifetime I'll be happy!

I hated the whole business of gift-giving, and I learned why many years later. If our gifts were piddling and small, and perfunctory (underwear and a new school tie perhaps), we children did not have the funds to buy gifts for those we cared about. One of life's great pleasures for me is to hunt out a gift that I think somebody special would enjoy. I cannot afford anything too grand now, but I've learned that a few pounds can provide a treasure if the digging is done in the right place.

I have a small fibre-optic Christmas tree. It has not come out too clearly in the picture, but rest assured that it's a bit of an out-of-sight light show. In a darkened room with music playing, it's a trip.

Cailean has his Christmas gift already. I'd bought him a very lightweight, but super-warm blanket. Came the ice, out came his gift. He's asleep under it, below my desk, at this very moment. Better to be toasty on the 20th December than to shiver for days and nights just to be precise about a gift-date. Heck, Mount Mayon might rumble and it could be palm trees in the courtyard by the 25th December. Make hay …

I bought myself something rather brilliant: The complete, stereo, digitally-remastered, box-set of the Beatles CDs. Absolutely fantastic. On sale at a considerable savings at Amazon.UK. I've been tripping back to the Sixties. You see, I didn't wait till the 25th for my gift. Mount Mayon and all, I might be out sweating in the heat in the courtyard on Christmas Day. These past few days, however, I've been listening to all the Beatles CDs, hearing things I never heard before, while lying on the sofa, facing the window to the High Street, watching the snow sweep down. And saying aloud: This is magic! Absolutely magic!

If you got a gift from me, you probably could guess that it was a book or CD or DVD. Shapes of things. Things I hope will turn you on.

As we had a postal strike looming and happening in the UK, I decided not to get Christmas cards printed this year, but cards with Cailean and I snarling at the world, as we do, with gentle teeth and not with our eyes, with love really, and the word PEACE. Inside, a quotation from an essay by Virginia Woolf. The words head up this blog entry.

From Amble in the Ice, we wish you the best for the holidays, and let's all come to our senses in 2010, or at least enough of us to drive out the tyrants, warmongers and saviours.
Posted by Ross Eldridge at 16:41

Smart. You can't be disappointed with a gift you buy yourself... or can you.

Saw Paul the other day playing 'Get Back' on the marquee of the old Ed Sullivan Theater and as soon as the song and interview were over I put on a Beatles mix. Just absolutely amazing music, even if not the new remaster. Cheers me every time. Coming to take me away, take me today--sunny ~25C, lovely day to walk the dogs. Maybe 6C tonight.

No chance of a white Christmas, not that I'm complaining.

Happy Christmas to you and Cailean. Bless us each and every one.

Hi there, Ross, and a very Merry to you. Damn it sounds cold where you are. Not sure I could take it.

Are those hedgehogs on the fireplace top? They look like hedgehogs--one of my favorite animals.

I used to let my kids buy their own presents with the theory that they would never be disappointed. It worked, at least as far as I know. They were probably disappointed with the amount they had to spend, but they survived.

I just heard the Beattles on the TV this morning. Also heard the Stones. We DID have great music, didn't we?

And here's the "postcard" you mentioned in your nice piece on Camroc Press. I think I'd need more than Amble by the sea to make sure something reached you. Nice piece that was.

i'm sad that your christmas memories aren't all star-spangled and (probably erroneously) rosy-glowed as mine are, but i sure do love to read about how you do it now. i LOVE that your gifts are all thought about, pored over, and carefully selected. that's my main objection to the ubiquitous gift card.....yeah, it means everyone can get what they want, but is that really all a gift is supposed to be?
i'm horrified to realize that you're not on my christmas card list! may i PLEASE have one of you and cailean snarling, and i'll counter with a belated one of the guys and me beaming from jobson's cove.
:) khairete
suz