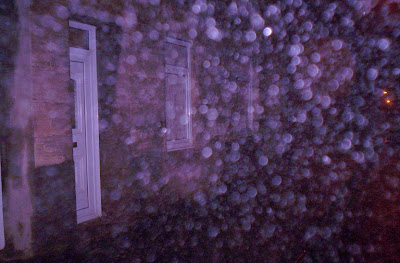 AS IT HAPPENED, I WAS NOT born in a hurricane. It must have been a pretty fair Sunday morning because the doctor who delivered me (feet first) was planning on going sailing that day in November, mumble years ago. I arrived at 7.06 a.m. and I’d like to think the doctor managed to head over to the Royal Bermuda Yacht Club. I don’t know how many hours he had spent dragging me into this world. He might have been tired.

Yesterday, in Northumberland at least, the rains came. The last bits of snow and ice on my courtyard finally washed away. I spent the morning down the coast in Blyth, or in a field outside Blythe to be accurate, standing in the steady rain and a freezing fog, looking at polytunnels. Only a couple of the tunnels were in use, and they were not very warm inside, despite having some heated air pumped in from time to time. Tomato seedlings in one, and sprigs of lavender and bits of geraniums in rows and rows of plastic pots in another. I noticed an almost-dead rubber tree, five feet tall, in a large pot. I imagine it had lost its will to live over the harsh winter we’ve had.

I am familiar with rubber trees. Full-grown, enormous rubber trees in Bermuda. I have climbed about in them, including one that was famously painted by the artist Georgia O’Keeffe in the mid-1930s when she was recovering from a nervous breakdown. There was a rubber tree near my mother’s home, and we’d swing on ropes in it. Outside the Bermuda Library in Par-la-Ville Gardens, another rubber tree giant loomed over the verandas where I’d sit and read in the warmer weather. Rubber trees like to be warm and moist.

Last night I stepped outside in the rain and took a picture of my flat. That’s the photograph above. To be honest, we don’t have a great deal of heavy rain up here. This winter has been unusual for abundant snow. In four years it has not seemed worth taking a look at the rain, much less getting the camera out in it. Four years ago the reservoirs were running dry and we were not to water our lawns or wash our cars. This year I’m taking long showers and deep, hot baths, and I’m not feeling any guilt.

In Bermuda, despite a wet climate, the rain was not dependable. We might have three months of more-than-average rainfall, then many months of severe drought. Our water was caught on our whitewashed rooftops, running into tanks below the ground floor. We were permitted brief showers and very shallow baths. I still have a moment of panic and guilt to work through if I’ve been showering more than 90 seconds.

Curiously, I don’t recall many rainy days in Bermuda, though we must have had a few. I walked to and from school, or had a bicycle, and I can only think some days must have been inclement. I don’t recall having a raincoat or umbrella, which would have been a bother at school. We had a few rainy lunchtimes at school. Normally we ate picnic-style comestibles out on the fields. When it rained we were crammed into the school’s lunchroom. This room was also used if we were to see a film (the only film I recall involved a dam across the Zambezi River). In the lunchroom we had benches without backs and fold-away tables. The lunchroom eventually became the biology lab, same benches and tables. I cannot think where we spent rainy lunch periods after that conversion. Rain must have been rare, or a feature of the night.

During school holidays, I do remember a very few days spent on our dock, sheltered beneath an overturned boat on the planks, with fishing lines lowered through the gaps. I think we took shelter because someone usually had a precious transistor radio. But holidays were not rained out.

In Bermuda, it always rained on either Christmas Day or Boxing Day. We did not suffer this in misery, and we usually went visiting by car (relatives or taxis).

In England, rain rarely interrupted my life. I do remember standing in Piccadilly Circus very late at night in a downpour and discovering that the reflections in the water running around our feet were as exciting as the lights blinking on the buildings around us. An out-of-sight light show. Holidaying with my mother’s people in Harle Syke, Lancashire involved cold summers; we’d have coal fires in August, but misty rain at the worst. And if off to Morecambe for a week or two, every day we’d been walking along the front, or on the sands. Hardly hiding away from downpours.

I remember three hurricanes in Bermuda. Arlene, in August 1963, flattened all our tall casuarinas. The root systems were so dramatic when ripped from the ground that the local newspaper sent a reporter and photographer round to our house. My sister and I made the front page.

Hurricane Emily came along in late September of 1987. We woke to find it on top of the Island. It moved on quickly, but did a good deal of damage. We had no electricity for ten days. Fortunately, a neighbour had a cooker that used gas in cylinders and I was able to cook all my food. Water had to be dipped out of our tank with a bucket on a rope, enough to wash one’s face and underarms and bits, and to flush the toilet once or twice a day. The trees we’d planted to replace the casuarinas lost in the 1963 storm all came down in 1987.

On 5 September 2003, Hurricane Fabian roared over Bermuda and paused there for the best part of 15 hours. I was not quite alone in my cottage, my dog Aleks rode out the storm with me. The electricity went off almost immediately, and the reason was clear. From the house I could see that every tree in every direction had come down, and any power lines (and other utilities carried on poles on the roadsides) were in a tangle of trees in streets, on lawns and slumped across rooftops. I’d heard a thump, and the ceiling in my living room started leaking, but it didn’t collapse at least. Remarkably, my telephone kept working and through the day and late into the night I was able to speak with friends. One described his roof tiles dropping around his home, miraculously missing his car.

Fabian left me without electricity for a few days, but because I lived across the road from Bermuda’s Deputy Governor, and a few doors down from the Premier, the streets outside my residence were cleared promptly, and cables were going up on new poles within a day or two.

If you want to experience driving rain, a hurricane on an island 600 miles out in the Atlantic is the way to go. The rain comes at you horizontally; the waves break on the edge of the volcanic archipelago and sweep over everything. Tornados and water spouts drop water from overhead.

In Hurricane, Utah, about 15 years ago, I experienced a flash flood. I was with a friend in her car, not a mile from her home, and suddenly we were inundated by water. First from above, onto the hard desert sand and rock. The rain could not soak into the ground and Hurricane’s streets were soon awash as water roared along the valley floor. Cars were being driven up onto anything higher than street level, we followed. And for a relatively short time, perhaps 15 minutes, we watched the new river running through town. And then it was gone, rain and river. The sun blazed through and in an hour dust and tumbleweeds blew down Main Street as usual.

It is raining heavily today in Amble by the Sea. Cailean has refused to go more than a squat outside the door. I have the day off, and I had things I needed to do in town. So, off for a haircut and postage stamps. The barber and the postmistress both wondered why Cailean was not with me. I explained that he was not overly fond of chilly rain. If there’s running water on the pavement, or puddles, Cailean ends up swimming with those very short legs.

I’m enjoying the rain beating on the windows. I'm writing and listening to Tchaikovsky's Eugene Onegin, sung in English. Cailean is in his bed, under his blanket. It’s not all bad, this rainy day.