Kittens for the Drowning 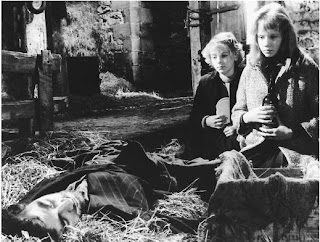 All the powers in the universe are already ours.
It is we who have put our hands before our eyes
and cry that it is dark.

IN 1961 I was staying with my Auntie Maud in the house in Harle Syke, Lancashire, in which she and my grandfather and my great-uncle James Arthur had been brought up in the early years of the Twentieth Century. My great-grandparents had bought the terraced house on Sutcliffe Street, overlooking the moors at that time, before the Great War. A messenger from the War Office brought word to Harry and Elizabeth Lancaster that their oldest son, James Arthur, had been killed in battle on 2 September 1918. The messenger would have knocked on the same door that I ran in and out of a dozen times a day in 1961. I never gave it a thought. In fact, this moment, in 2010, is the first time that I’ve made that connection.

There are so many connections that one can make in life and death. I tend to ramble on the telephone. I have one friend with whom I have had extensive and wandering telephone conversations for over forty years. Not quite Virginia Woolf’s streams of consciousness, we have tended to be more intelligible, I believe. However, even a journey from A to B has tended to include stops in X, Y and Z.

In 1961, while in Harle Syke, the main topic of conversation on the bus, in the Post Office, at the Mill, was the film “Whistle down the Wind” which had been filmed in the communities around Burnley that year. The people in Harle Syke spoke of it, and strangers in Clitheroe did as well, and people one had never met standing in a queue in Burnley.

When the film opened in Burnley, Auntie Maud took me down on the bus. We’d have seen an early evening show, I believe, as Maud was still working shifts in the Queen Street Mill. She’d been first sent to work in that Mill in about 1908, aged eleven, over fifty years before. I’ve just made that connection, noted it. In 1961, as far as I was concerned, Maud just went along to the Mill of a morning, not of a lifetime. I can tell you that she retired in late 1961 and went to live at the seaside, Morecambe, with a friend. She died of a stroke two months after that, her body was brought back to the family plot in the Haggate Cemetery where we’d trimmed weeds growing over my great-grandparents and Maud’s husband and son who’d all died young. At the funeral, someone said to my grandfather: “Maud didn’t last long away from Syke.” There’s an expression we use to mention death in other words: Maud popped her clogs. Until her retirement, Maud actually wore clogs when she was at work. I don’t know if she’d taken them to Morecambe.

Whistle down the Wind starts with a man flinging a sack into a reservoir or small lake. Not a scenic place, the water surrounded by rough rock and sand, with no grass or trees in sight. The man walks away as the sack starts to sink. And three young children who have been following the man at a distance run to the water’s edge and hook the sack with a stick and guide it to the shore. When the sack is hurriedly opened, we see what even I as a young child expected: mewing kittens.

A few years before I saw Whistle down the Wind, I’d had the dubious pleasure of watching the 1948 film version of Oliver Twist. The entire school I was attending, juniors and seniors, had been marched along to the Morgan Hall where we held assemblies and fairs and pet shows and we’d been instructed to sit quietly on the metal and canvas chairs facing the stage. Below the proscenium arch a large screen had been set up. A film projector was on a table half-way down the room. This was a rare thing. In fact, I recall only two other films being shown in the Morgan Hall, Leni Riefenstahl’s “Olympia” on the Berlin Olympics of 1936, which was shown at night and parents had to accompany the children attending, and another Dickens of a movie, “David Copperfield.” This version of David Copperfield had been made in 1935, starring WC Fields as Mr Micawber.

The 1948 feature Oliver Twist is awfully different from the musical “Oliver!” which it somehow spawned about twenty years later. I’m not exactly sure that young schoolchildren should have been seeing Oliver Twist in the mid to late 1950s before we’d had our souls hardened by television. In Dickens’ original story, Oliver Twist’s life is not at all cute and filled with all-dancing, all-singing, pocket-picking chums. Bill Sikes beats Nancy (who loves him despite their abusive relationship) and eventually he mauls her to death. Make a song and dance out of that!

I recall that murder. I never read David Copperfield or Oliver Twist after seeing those movie versions. I never wanted to. Afraid of identifying with the lads, perhaps. However, grim as Nancy’s untimely (if not unlikely) death is, I best remember, having dwelt on it in dark moments for decades, Bill Sikes attempting to drown his dog “Bull’s-eye”. The dog, as dogs do, was pretty faithful to Sikes, choosing to ignore Sikes’s dark and evil heart. Bull’s-eye survives long enough to see Sikes accidentally hang himself, and I believe the poor dog followed him to Hell.

That sack with the dog and a brick in it has been something of a brick in my spirit. I’ve probably invested more love and concern for my dogs (and those I’ve dog-sat) than most of my family. My Cailean is family; my Aleks was too, as was my Lexi. My cat, Pudding, was also both friend and related in some way.

I have an unpleasant cat story. Sometime in the late 1960s one of my sisters, living with my father and stepmother at that time, had managed to adopt several stray cats, all of which turned out to be female and in the family way. A head count soon after revealed a total of 35 moggies. My father filled a bucket with water and drowned kitten after kitten, and buried the dozens of wet bodies under a hedge. I did not witness this, but heard about it in whispered tones, and then it was never mentioned again. Until today. A slaughter of the innocents.

Whistle down the Wind is about three farmer’s children in Lancashire in about 1961. The oldest girl, played by a very young Hayley Mills (her mother had written the book), discovers a sleeping bearded man in a seldom-used barn. She calls out to him: “Who are you?” The startled man wakes, muttering: “Jesus Christ!” in shock. And the little girl takes the man at face value, and true to his words, and believes she has Jesus in her father’s barn.

The film holds up well fifty years later. I watched it yesterday for only the second time. In 1961, I’d not picked up on all the references to the life and death of Jesus in the film. References and allegories. I did understand, all those years ago, that the children (my age at that time) were innocent, and the adults doubted. I'd identified with the children and thought them in the right. Now, I guess I’d say the children were naive, foolish, and somehow to blame for their ignorance. I’d like to think that even the youngest child questions everything. Everything. The bearded man in the barn is a murderer on the run from the police. He gets Hayley Mills to bring him a gun he has hidden in a railway tunnel. By this time, many, many children have become his followers. The grown-ups know nothing of this. Until a little boy lets it slip. The hunt is on again as the police are called to the farm. The man is holed up in the barn with his gun. Outside, the police are facing a swarm of children.

I don’t have any children. Can’t say I ever wanted any. Watching Whistle down the Wind I had to wonder whether I would want my children, if I had any, wrapped up against the cold, hard, real world, everything doubted. Trust no one. Or would I want my children to make up their own minds, take some chances based on what they’ve been taught (putting an onus on me to teach them), and to stand up for what they believe? Even if it’s risky as heck.

We sent our boys and girls to church and Sunday school in my day, and some parents thinking they are righteous and all-knowing send their kids to churches, synagogues, temples and mosques in 2010. They expect those youngsters to come home filled with the Holy Spirit.

It seems to me that a child that is told to believe in something outside him, to have total and unwavering faith in this something, is put in harm’s way. A child raised up in this fashion must accept the Crusades and the Holy Wars, the Edicts and the Fatwa’s, the flames of hell flickering at one’s feet as one reaches up for the arms of the angels.

Children might as well be placed in a bag with a great stone and flung into deep water.

Surely, it would be better to understand oneself and then one’s relationships with everyone and everything else. No murderous false gods in the barn, or in the Temple, but the feeling of well-being when one wakes in one’s own mind and body. Arriving without travelling.
Posted by Ross Eldridge at 19:06

Email ThisBlogThis!Share to TwitterShare to FacebookShare to Pinterest
Labels: belief, religion, Whistle down the Wind

I remember that movie. Alan Bates was the man in the barn--Jesus--right?

You brought back vivid memories of the movie and many memories of brutal methods of managing animals. Thank God--although the Right probably doesn't see it this way--for neutering. The most benevolent thing for all concerned. I never could see how my father could throw baby rats against the cement, killing a nest of them he'd found.

We evolve. Slowly, but we do evolve.