The Refuge of the Rails 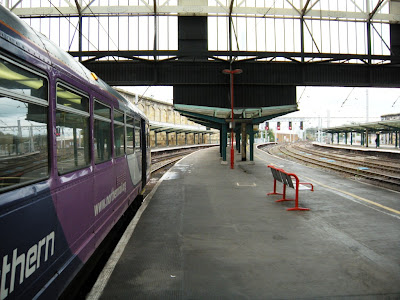 Railway termini are our gates to the glorious and the unknown.
Through them we pass out into adventure and sunshine,
to them, alas! we return.
E.M Forster

WHEN I WIN THE LOTTO, I’ve said I would buy an enormous country house. If I did go up to town I’d stay, I think, in a hotel: my usual suite at the Dorchester in Mayfair. I’d not be paying penthouse prices as I am not too fond of floors above, say, the third or fourth. Fairly easy to escape from on foot in an emergency and near the kitchens if one had a hot meal delivered to one's rooms.

Town and country sorted, then. And another thing, while I’m so incredibly well off: I’d like my own private train. My train, which would have several carriages as I intend to be quite comfortable, featuring a few sleeping compartments, a private bathroom (another for guests), a lounge and an office-cum-library. A connected carriage would have staff quarters and a kitchen, and storage. I think this fantasy comes courtesy of Sir Winston Churchill who, I have heard, tootled around the country in his private railway carriage during World War Two. I understand he would dictate letters as he soaked in his bathtub. On occasion, when the train happened to be in a station when he woke in the morning, Churchill would alight and, wearing his dressing gown, look for the newspapers. To be honest, my valet would be doing that for me; I’d feel a right Charlie making my way to W.H. Smith’s in a state of dishabille.

I have been a fan, a fanatic, when it comes to trains from the first moment I rode on one. I was a little boy with my mother’s father and father’s mother, off the coach in the BOAC Terminal in Victoria, London. We walked, with our modest luggage, along to Victoria Station, and bought tickets from someone behind a wicket. Single, child, to Gillingham. The train was not at all elegant, or attractive, and it was crowded. Back in the day the corridor was along one side of the carriages, very narrow, and small compartments branched off that, each seating six fairly comfortably (three facing three). One could slide a door closed and feel quite private. You’ve seen the old movies: the man reading a newspaper, others are smoking, two girls giggling. This is Third Class: the newspaper is a tabloid, the Daily Mirror. You want The Times? Walk along to First Class. Was there a Second Class?

Ninety minutes later I’d rattled into a state of wonder: the things to see inside the train, the actual physical motion and noise as we clattered to the south and east of London, the landscape outside the window which still featured crumbled buildings and craters left over from the War. Absolute magic. British Rail.

As a teenager I enjoyed days off to London by myself on the train. Getting there and back was almost as much fun as the gallery, museum, great church or film I’d see. In the city I’d travel on the Underground. To this day I cannot figure out the London bus system, but can nip about happily on the Tube.

I recall my first trip on a train with a steam locomotive; I was not yet a teenager and felt that it was quite okay to be totally over the moon at the experience. That was in Kent, on the Isle of Sheppey. Years later I took a night-time ride on a steam-driven train in the Rocky Mountains. The Heber Creeper took passengers on a trip from the little town of Heber through the Heber Valley to Bridal Veils Falls, and back again on the same track. The adventure I signed up for with friends was to last three hours, and we were advised to take picnics, and warned that the train (with its open carriages) would be attacked by a band of marauding Indians, who would be driven off by Cowboys called to rescue us, all on horseback. Alas, our train broke down in the middle of nowhere, without hostile savages or a life-saving posse for comfort. We sat in the dark (and surprising cold, never mind it was summer) for several hours. It was after midnight when we got home.

This summer I have taken two steam train trips, one in Yorkshire and the other in Cumbria: all the rattling, the smoke and the smuts from the engine, worn upholstery and weathered woodwork. Fabulous! My private train, however, will not be drawn by a steam locomotive, and my decor will be fabulous in a different way: well-posh.

This past Monday I was off to the Lake District on a tiny cross-country train that pretty much followed Hadrian’s Wall across the north. The wee Northern Express was more like two buses in tandem riding the rails than a grown-up train. The voyage out went off almost on time, a twenty-minute delay. Coming back at night the East Coast train from King’s Cross to Edinburgh, which I had to meet in Newcastle, was well over an hour late. Newcastle Station was bitterly cold with no enclosed waiting room on our platform. The loudspeaker messages in the Geordie dialect and echoing in the very nearly empty station made little sense to me. I had to keep walking to study a digital display screen. The delay was due to “security issues” on the train to the south of us. We shivered and thought “bombs” as one does these days. The Geordie voice repeated regularly his mantra about left packages in the station. They might be bombs. Don't leave any, and don't touch any. Robots will remove and detonate them. 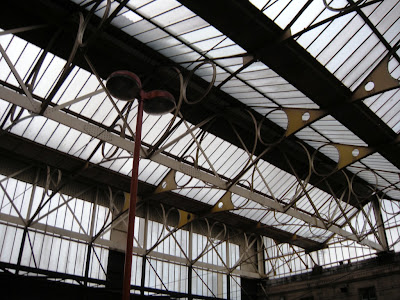 The train eventually arrived and I noted there were not many passengers on it, few got off, only ten, perhaps, got on board. How many people simply go searching for other options? We set off at speed and then, ten minutes later, stopped dead in a dark place. So dark that I’m not sure whether we were surrounded by farmland, woodland or suburbs. We sat there in complete silence for ten minutes, and then a most apologetic voice explained that a train ahead of us, on our rail, had triggered some sort of mechanism which blocked the forward progress of all the trains behind it. Silence. Then a Scottish voice told us he was bringing tea and sandwiches (for a price) from coach B through to coach H, then he was done for the night. For the people up from London, already stuck on board for nearing five hours, one would have thought they’d offer them a free sarnie and soda. Nope.

Ten minutes more and the train began its travels again, remarkably slowly. I wasn’t sure we were moving as distant points of light seemed fixed, even though the carriage seemed to be throbbing a bit.

I had missed two buses that I could have connected with at my station, so I had to call for a taxi. My little dog had been home alone the entire day, and I’d expected to be back before the dead of night set in. Cailean had been in a dark kitchen. The welcome I got was incredible. Some dogs, fed up, might have thought to bite an ankle, but Cailean wagged his tail and ran about like a rat on crack.

Cailean, of course, will travel with me on my train. We might just stop where Cailean’s bladder dictates, rather than where the trains usually pause. Back to Churchill: Besides being somewhat well-known for his train, Churchill had what he called his “black dog” which was his name for the difficult, down periods in what I think we would now call Manic Depressive Illness, or Bipolar Disorder. I have a black dog, and the black dog. And a dream, a fantasy, of a refuge on the rails.