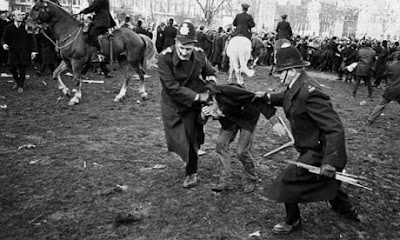 This is a gift that I have, simple, simple; a
foolish extravagant spirit, full of forms, figures,
shapes, objects, ideas, apprehensions, motions,
revolutions: these are begot in the ventricle of
memory, nourished in the womb of pia mater, and
delivered upon the mellowing of occasion. But the
gift is good in those in whom it is acute, and I am
thankful for it.
William Shakespeare (Love's Labour's Lost, Act IV, Scene II)

I HAVE SLEEPLESS NIGHTS. Do people who work the night shift ever suffer from sleepless days? Fortunately, or unfortunately, depending on my mood, these hours awake when others sleep are not so regular, so frequent, as to render me useless most of the time. Four or five times a week I can get safely to the minimart for milk, to the greengrocer for broccoli, and to Roland's Butchers for a bit of fresh lamb's liver for Cailean, and not be standing out on the street wondering whether it is Thursday or Norway. When I am truly knackered in the daytime, I try not to stray past the pages of the book I'm reading. Cups of tea and a blanket over my legs on the sofa, and the dog kipping on his back alongside me.

When I become the vampire, the creature of the night, I usually have fallen asleep in the early evening, as early as tea-time, and wakened by nine o'clock. From that hour my mind races, I often pace the floor, and have to fight the temptation to leave the flat and go walking in the mists that this seaside village hides in every night. Fortunately for me, Cailean is not much of a werewolf, and he doesn't often care to go outside after dark, except for pee breaks in the courtyard, and snappy ones at that.

I did actually take him for one late night walk recently in the moonlight, near the River Coquet, and very nearly had to carry him home: hooting owls, barking dogs, splashes in the water, rather a lot of bunnies, and the clanking of cables on the aluminium masts of the sailboats. Oh, I think Cailean would have stayed by the river, but I was scared shitless and couldn't get home through the heaped autumn leaves fast enough. We were like two protons in the Large Hadron Collider!

Back at home. I find I can watch the television comfortably until midnight, and can push on for another hour if there's a good film showing. I rather like weird foreign films with subtitles; T-rated films: transvestites, transsexuals, tortured priests, twinks, trolls, tits, theatrics, twists in the plot, therapy, trench-coats. Well, anything by Pedro Almodóvar.

When I've had enough of the telly, I read for a while. Cailean, for many hours by this time, has been asleep under several blankets with all his toys. Approaching two-thirty in the morning, bladders must be relieved, mine first. Then out into the cold with the pup. The security light blazes and any inclination to sleep is blasted right out of me. We run back inside, switching off any lights, stand-by switches and the heater if it has been on. Cailean vanishes under the covers with "Snakey", a favourite stuffed toy that is a good deal bigger than he is. I pull the blankets up, face the ceiling, and start thinking.

Some years ago, I wrote a newspaper column that tended to be about days gone by, which were sometimes the good old days of my youth, sometimes about the travel I'd managed when my health and finances permitted, about people that I'd met, books I'd read, things that influenced me, the shitty experiences of childhood, conversions and diversions. My therapist thought I was getting all the past out of my system. I kept a journal for over twenty-five years, scrapbooks as well, and photo albums. Everything was on paper, somehow. As we carry the past along with us, perceiving time as we do in these dimensions, I hardly expected to get everything out of my system!

Three years ago I took all my journals to an industrial incinerator plant, along with my scrapbooks. So much for what I did in 1980; so much for the newspaper clipping of my mother's funeral notice; so much for important telephone numbers; so much for jokes that were so funny when I heard them that they had to be written down; so much for my thoughts on 11 September, 2001; so much for theatre tickets, and an address blotchy on a beer-mat, and a coin I picked up that I did not recognise. Into the fire.

I left my photo albums (and I'd been the keeper of the family photographs among my siblings), my personal papers, my newspaper columns, my reference books and notes, everything that I'd written, in an old cargo container in a damp field in Bermuda. When I turned my back on it, I knew that I'd not pay the storage fees after the first six months, and I didn't, and that was three years ago. Those things have gone. Apparently, as of three years ago, I'd pretty much dumped the baggage of my past, mentally, and the physical followed.

Back in England, I found I was unable, couldn't be arsed, to write about schooldays and fishing off the rocks and climbing Mount Pisgah on Beaver Island, though I was vaguely conscious of those times. Instead of panoramic views of driving through the Grand Tetons that just go on and on, I have a little, the smallest, Post-it Note reading "Saw the Tetons". Enough seen, enough said.

I'm tending to write about the moment, or at least last night or a day or two ago. I've taken up photography, I see something interesting, camera always at the ready, I get my snapshot, and I write about it. Or delete it. I don't save it.

And, in the night, in the last few hours before sunrise, my mind races. Something I saw the day before. I have a tiny torch, the sort that one might attach to a key ring, and I reach for it, my biro pen, and a jotter pad (they are scattered all around the flat), and I write down my great thoughts. Light out. Another thought. Light on. And through the night. Light off. Light on.

Sometimes I sit up completely and my thoughts become visual. In the room, awkwardly manoeuvring around the clutter, walk people and animals, sometimes flags flutter, things blow across the carpet which has become a street. There is no sound, unless I make it, and I don't want to disturb Cailean by talking to short-term memories.

Last night, I watched water cascading downwards through what should have been the carpeted floor, only it had become a rough path down a mountain, and pine trees hovered behind the furniture. It was quite remarkable; I made a note of it on my jotter pad. Had there been full sound, I imagine I might have been frightened.

Cailean only needs to pee once in the night, but I must go two or three times, so I got up from the sofa-bed and walked out of the woods, down the hall to the bathroom. When I came back, the room was a room again. I decided to make a large mug of coffee, which I do using skimmed milk rather than water. Four minutes and ten seconds in the microwave does it exactly. And I sit in the dark and drink the coffee and listen to music playing in my head. Coffee does that to me. Indie and Brit Pop.

Coffee also makes me sleepy at five in the morning. This morning, I wrote a few more notes and then rolled over in the bed, felt Cailean curl up behind my knees, closed my eyes, and then it was eight-thirty. Cailean was playing with Snakey on top of the blankets; the room was so bright that I knew it was a sunny day outside.

I do my house-cleaning chores on Friday, and I made beef stew from scratch, which takes two hours, not including the suet dumplings. So, I've done all that, it's Friday evening.

Just now, I had a look at my jotter pad. It reads, in part: "Revolution revisited before 2008 has passed!"

I must tell you my mind is not so far gone that I cannot figure the line out. You see, 1968, exactly 40 years ago, was quite the year for social unrest and upheaval, assassinations, invasions, riots and beatings and strikes.

The Rolling Stones sang their take on it, their anthem, Street Fighting Man, which is a shit song as far as music goes, but it included the lyric: "Summer's here and the time is right for fighting in the street, boy..." which is memorable to an old Stones fan such as myself.

I was into all that Peace and Love business back in 1968. However, I am looking for some evolution, some revolution, in 2008. In international finance, in coming to grips with hunger and pollution and terrorism, in international political relations. I am hoping that a revolution of common sense over prejudice will see Barack Obama become President of the United States of America. The election of John F. Kennedy back in 1960 broke the evil spell over Roman Catholicism, and I imagine only those hillbillies and crackers in the USA give a hoot about the Catholic influence now. Can Barack Obama, even if he is only half a man of black African blood, if elected, contribute hugely to a decline in institutionalised racism and prejudice? I think so. I hope so.

I'm afraid, for me, Obama's opponent, John McCain, is the hero from the Vietnam War. Can a war that should never have been (and that was ultimately lost) truly have great heroes? I'm not sure that suffering, which McCain certainly had his share of, can be equated with heroism. Many would disagree with me across the Atlantic.

Struggles against suffering, however, can be heroic at times.

Ahhhh . . . so much to digest before I dare comment. Take care, my friend, take care. And kiss that sweet Cailean on the tip of his cold, wet nose.

hi bolphie!
why not wander like a vampire through your moondark mists? i adore night rambling.
all i can think of when i look at your revolution pic is 'how do english bobbies manage to bear that weird strap around the lower third of their faces?'
it looks good for obama, if you consider getting into the white house a 'good' thing. he's got challenges that would daunt herakles. it's going to be a heartbreakingly difficult presidency, and i'm humbled that a guy of his intellect and abilities is willing to take it on.
may all the gods spare us sarah palin, and may they protect president obama from the hail of bullets that will surely be coming his way.
khairete
suz