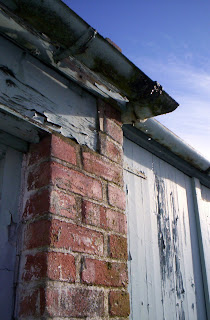 I WOKE TO MORE MUMBLING than usual this morning. I've been falling asleep with the radio on recently and it doesn't seem to bother Cailean, so I've allowed it to continue. There's something very pleasant about drifting off to sleep to music, or a book at bedtime, without fretting over switching the radio off at some last moment.

There's a temporary female presenter on the Radio 2 early morning show, her name is Sarah and she doesn't seem to be young. Normally it would be Sir Terry Wogan who is definitely not young. In any event, this Sarah is taking requests for show tunes. I wish I could recall what today's featured song was, I can only recall it was sung by Jimmy Durante. It was pleasant, cheerful.

At seven o'clock I was still in bed, waiting to hear the news headlines and the brief run through of the front page stories in the daily newspapers. Sarah tried, again, to pronounce paraskevidekatriaphobia … a word meaning fear of Friday the thirteenth. Today is one of those days.

A commuter plane has crashed into a house in Buffalo, New York, with 49 deaths. Remarkable that only one person on the ground was killed. And I thought to myself, again, that I'm glad my travelling days are done with.

A regulatory body is investigating the financial services products division of AIG in the UK. I tried to figure out just how worthless my AIG shares would be now if I still had them. A bit like the currency of Zimbabwe.

A thirteen-years-old boy has had a child with a fifteen-years-old girl; the boy was just twelve when he did the deed. The commentator on the radio had the benefit of a photograph of the proud father. "He looks young for his age…" I wondered if the child might be guilty of rape. The baby and its young mother are living with the mother's mother on a council estate somewhere. What a world, babies having babies and scrawny Madonna flashing her crotch in music videos at fifty and bidding for babies in fifth world countries with other celebrities. Ugh!

A Dutch politician with a name somewhat more muddling than paraskevidekatriaphobia tried to visit England yesterday to present a seventeen-minute film he has made, to be aired in the House of Lords of all places. The film, apparently, is anti-Islamic. The Lowlander believes that the Koran should be outlawed as terrorist material. He may be right. The Old and New Testaments should go on the dung-heap too, if that is the case. The point of the Dutchman's odyssey was to toy with our freedom of speech laws. He was put on the next flight back to Holland. So much for freedom of speech in Britain. Does MI5 read my blog?

Prince Harry has to go on a course to brush up on his social skills because he made some sort of racist remark years ago. Harry called a fellow soldier a Paki, meaning, I think, the other soldier was of Pakistani heritage. Poor Harry: His heritage, parentage, is a never-ending source of comic comment. Yet nobody leans on the comedians when Harry is the butt of jokes that must be hurtful. I'm a little torn on this matter, not really believing in the Royal Family business. Prince Philip notably referred to some oriental folks as slitty-eyed some years ago, but has not had to do a refresher course in polite speaking.

Cailean started getting restless about then, and out into the snow we had to go, me in my Bermuda shorts and t-shirt. A fashionista would have a field day.

We had several inches of unexpected snow on Thursday, yesterday, causing the usual chaos. I'd walked Cailean early in the day, though it was snowing before we got home. Cailean made a snowman of sorts for the first time with very little help. I made a fist-sized snowball which Cailean then rolled about with his nose, and it grew and grew until he couldn't push it further, larger than a football. Cailean loves the snow.

Today, after my news headlines and the coffee that gets me going, I padded along the street for a few groceries. There's not a cloud in the sky and the temperature is finally above freezing. The snow is melting in the sunlight. The rooftops facing the south have water coming down over the guttering as the heaped snow is melting so rapidly. I was quite spattered with water by the time I reached the butcher's shop. There was something most pleasant about it. The icy water might have been the trickle of sweat on one's neck on a hot summer day.

I cannot be one hundred percent sure, but this feels like the thaw … at last. All will be spring from now on.

Friday the thirteenth … Lucky for some.

i can doze off to tv or radio, but it makes for fitful unproductive sleep. i'm a little alarmed at how much i need real quiet to sleep any more. i'm turning into a crabby old lady, shuffling out to snarl at the boys if they're up late killing things on halo and whooping it up.
i have a harder time reminding myself when i'm flying how statistically safe i am. i never used to give it a thought, but i'm occasionally paralyzed with claustrophia and throat-closing fear of how high i am when i'm in a plane now. i should see if i can get some valium or something. but it seems as if druggies have no problem finding this stuff, but when i do something like, oh get nailed head on by a carful of hill-hoppers, the doctor refuses to give me anything stronger than codeine lest i become a slavering addict.
am i ranting?
AIG is our insurer, which bothers me.
some skank in CA (i think) just had her second litter thanks to fertility drugs, even though she is unemployed and on food stamps. i'd like to see her doctor prosecuted. her response to the question 'how will you support your 14 children' was 'i will be present for them.'
@@
i think 'paki' was probably just a diminutive. poor harry.
thaw in february in northern england?? surely not!
after a glorious preview of spring, our temps are dropping again. i'm wearing my new underarmour shirt when i do the barn. it's magically useful, even if i do look like a stuffed sausage in it.
:) khaire
suz

Tomorrow we are PROMISED temperatures at our near "double digits" ... which sounds grim, but we're Celsius, so 10C which is 50F ... not half bad. The thaw continued today, and I poured hellishly hot water on the snow outside my kitchen so I could walk to the road without taking a slide. Don't know, it just feels as if the weather has "changed". I sure hope so.

Must admit the only time in the last 45 years that I've flown sober was 3 years ago. It turned out to be the roughest flight I've ever been on, the stewardesses could only stew ... the air calmed down after 5 hours (Bermuda to London) we ALL had to remain belted up till we were nearing Ireland, and we had to eat 2 meals in 30 minutes, plus pee and clean up, then come on down. I've not taken tranquilizers in ten years, but have a stock of outdated leftovers in my wallet. It's the thought that counts ...

Interesting that you cannot easily sleep with radio or TV. They are fatal to me now. I manage an hour of telly and I'm out of it ... Fortunately my broadband TV service permits me to dial up anything from the past week (at the very least) so I don't miss important things like Coronation Street.

Just made Toll House Cookies, only I substitute premium fruit bits for the chocolate chips. So that's my plan, cookies and hot milk and a very little TV, followed by a nice nap. Then bed.

Hi Ross. My old neighbors here in Costa Rica used to say, " I was watching TV last night and then woke to find the TV watching me."

I find TV increasingly boring every year and once The News is over I'm usually done for. Rather go read or write. Although... we watched a really good movie last night: Stranger Than Fiction. Have you seen it? It's a wonderful story about a man who hears a narrator's voice in his head, telling him his life as he lives it. The voice turns out to be an author (with writer's block) who is writing a novel about him. It's all very complicated and confusing, but very very good.

Isn't it weird how you can tell when the weather has changed? I often notice the our birds who will begin to fly and forage just before the rain actually stops. THEY know. I don't know why we wouldn't. I think it's one of those primal instincts we don't pay attention to anymore.

Speaking of primal instinct I see you are making Toll House cookies. Now there is a basic instinct for you. I'd have one of those myself!

Poor Prince Harry. Here, Costa Ricans refer to themselves as Ticos, Nicaraguans as Nicas, and would probably call Pakistanis Pakis. The world is too sensitive these days, don't you think? Being royalty and all, I suppose he must be made an example, do pennance, and move on.

Friday the thirteenth is a favorite of mine. My son, Sam, was born on one as was my husband. And in primary numbers 13 is 1 and 3 which adds up to 4, which I believe is a good luck thing. We could use a little touch of that. Right now up to our armpits in rats, which is better than snakes, but I fear they might come next...

i wish i had access to your outdated wallet stash for the bermuda flight this summer.
why would ANYONE want fruit bits over chocolate?????????
there is a bunch of daffydowndillies coming up in the herb garden. this morning they were frosted with a crunchy glaze of sleet. i just love daffies. they think spring when the world is still wintery.
:)khaire
suz

Believe me, the fruit bits in the cookies are a last resort. I've not been able to find any chocolate chips to put in the cookies! They MUST have them in some store here, but it might be ASDA (Wal-Mart here) which is is 30 mile round trip on the bus ... I am going to try creating my own chocolate chips by smashing a Cadbury's choccie deal into morsel-sized pieces.

Have you ever tried hypnosis? It's often rather effective and you can either do self-hypnosis at the time, or have a delayed suggestion kick in. Just make sure the hypnotist tells you how to turn it off!

Went to see a Queen tribute band (Mercury) last night. Very loud, late night for me, and Cailean was in no mood for sleeping when I got back ... so I watched telly through the night. Would have started creating my choc chips but thought smashing noises might have the neighbours thinking blue murder was going on Chez Ross.