Berwick falls to the Dachs 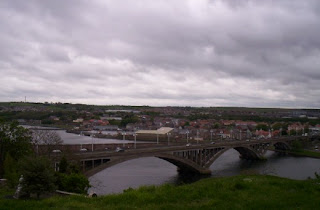 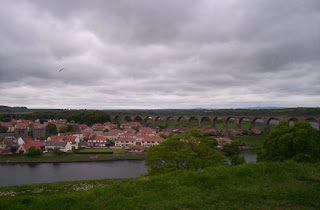 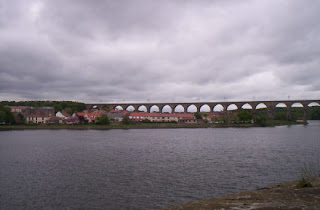 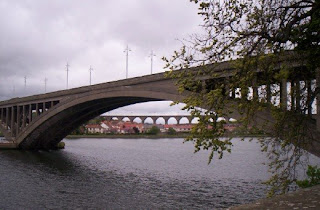 Mount you, my lord; towards Berwick post amain:
Edward and Richard, like a brace of greyhounds
Having the fearful flying hare in sight,
With fiery eyes sparkling for very wrath,
And bloody steel grasp'd in their ireful hands,
Are at our backs; and therefore hence amain.
William Shakespeare (Henry VI Part III. Act II, Scene V)

WE'VE HAD A VISITOR FROM AFAR. Family, actually, my mother's long-lost first cousin from Lancashire, by way of Canada. Just for a few days, staying at the Harbour Guest House and Tearooms (that certainly sounds English, eh?) here in Amble by the Sea. Jack gave the Harbour Guest House a big thumbs-up. I did not see his room, but I walk past the place with Cailean a few times a week on that particular loop around the town, and it's in a great location just yards from the water as well as the Town Square. I noted that after Jack had finished the full English breakfast provided at the guest house, which he said was terrific, he was too full for lunch. So, I shall recommend it for my visitors who aren't up to camping in my flat.

Early on Wednesday last I got Cailean into his harness and we three boarded the 518 bus for Alnwick at ten o'clock, arriving a half-hour later. There we joined the 501 bus for Berwick-upon-Tweed. This is the slower service snaking north along the coast and diverting into any number of small seaside villages (all of which feature a castle or ruin or something rather quaint). The scenic route takes two hours, and it is worth it for the professional sightseer or journeyman with the time to spare and an eye for beauty.

With early summer well under way this year, the countryside was green with trees and meadows and some crops, the rape fields are bright yellow just now. Our travelling day was grey (and windy) overhead. The North Sea was the colour of steel. In the open it was chilly.

The bus driver was something of a joker, taking the mickey out of two foreign ladies who had managed to flag down the bus from the wrong side of the road. We could not make heads or tails of their accented speech, the broken English as much of a mystery as the original tongue they spoke to each other. It was not a Latin language or German or Dutch. I wondered if it might be Finnish. Not that I've ever heard a Finnish person speak, but I knew an Estonian many years ago.

Then about a dozen ditzy women realised that they'd neglected to ring the bell to stop the bus at their destination, about a mile further on. They called out and walked down the bus and asked the driver what they should do. What they meant, I think, was: "Driver, what will you do?" The driver dodged that one and said: "Ladies, it's only a pleasant quarter-hour's walk back. You'll work up an appetite." The next bus in the opposite direction was not due any time soon, and he actually couldn't turn his bus around if he felt inclined to as we were on a narrow country road. The ladies bubbled out onto the roadside and we rolled on.

Cailean had drawn a good deal of attention, as he tends to do, ever since we began the day's jaunt. One group on the bus, about seven or eight youngish people with what I believe we now must say "learning difficulties", went mad for the pup, and he lapped it all up. Cailean looked over the tops of our seat, forward and back, as well as down the aisle, and between the seat backs. Nothing cuter than a dachshund's snout appearing between the seats of a bus! No barking, lots of waggy-tail.

I'd not been in Berwick-upon-Tweed before, just driving past on the way to and from Edinburgh. Berwick is famous for being the only bit of England north of the Tweed, which the Scots consider Scotland. Apparently, Berwick has changed hands between the Scots and the English some 13 times. The bus schedule says that Berwick is still at war with Russia in the Crimea. This is a folk tale, an error, and the odd situation that Berwick was separate from the rest of Great Britain was fixed centuries ago (see The Wales and Berwick Act, 1746). Berwick and Russia are not - repeat not - still at war over the Crimea since the 1850s. Perhaps the bus company should note this. Let's not promote ignorance, no matter how quaint.

We rolled across a newer bridge ... the northbound lane of the older bridge being closed to traffic, the other bridge to the west, a magnificent many-arched affair, is a railway bridge ... above the Tweed and into Golden Square. It was very nearly one o'clock and I was hungry, even if Jack was still happily digesting his full English breakfast. (Just so you know: bacon, eggs, sausages, black pudding, beans, mushrooms, fried tomatoes, toast and tea or coffee.) A hotel just off Golden Square had an inviting menu and the bartender said that while Cailean couldn't dine inside unless he was a guide dog (I must certify him as such!) the hotel had a lovely walled garden with dining facilities. We walked through a passageway and sat under grey skies, alas, but surrounded by flowers. Jack was coughing and wheezing, and as he'd just come from Canada, one was thinking "Mexican Swine Flu"? I was having a time with hay fever from birch pollen that afternoon. Still, I murdered a pasta lunch; Jack managed a bit of spicy carrot soup.

We then walked around the old town, down to the River, and up onto the fortifications. At times we were below and then far above the bridges.

Everywhere we went we met people with dogs. And Cailean was being particularly quiet (too tired to bark out with all the climbing about), but very grateful for greetings, and he was inundated with them. Dozens of people stopped us to ask after Cailean. Boy or girl? Cailean is neutered, but his todger is still there, for Pete's sake! How old? One year and two months. What kind of dog is he exactly? A dachshund. A sausage dog. A dash-hound. The last added because that's how they pronounce dachshund in Northumberland. How many people said: "Oh! I could just take him home with me. He's lovely!"

Trekking and the meet-and-greet having about done the three of us in, we headed back to Golden Square and sat on a bench by an ice-cream wagon. It was too chilly for ice-cream, to be honest. The bus home, the directly routed 505, taking half as long as the trip up, was very nearly due. A gentleman with what might be called those "learning difficulties" (or "eccentricities" if he'd been rich or posh) ... he was clearly mad as a box of frogs … did a bizarre jig for Cailean. Has the reader ever seen the episode of Seinfeld featuring Elaine's peculiar dance (and the slice of the Duke of Windsor's wedding cake, if I recall correctly)? This really weird jigging gentleman struck poses with limbs outstretched, balanced on one leg and then the other and he cried out to Cailean: "Hell-oo! Hell-oo!" over and over. And he wouldn't stop the dance, not for pedestrians and certainly not for my horrified stare. Cailean is a sweet-natured soul, and he ignored the dancing fool, which scored points with the crowd that had gathered around our bench. A bus was never more a sight for sore eyes than that 505 rolling into Golden Square.

Golden Square, by the way, is neither Golden nor Square. I didn't ask.

We were back in Alnwick at about four o'clock, and home in Amble an hour after that on the 420 bus. About five hours on buses that day, two hours hiking around Berwick. For those who enjoy the view from the bus, this is no hardship.

I'm thinking I might go up to Berwick again, with just Cailean, on the direct route, and spend more time looking down the back alleyways of old Berwick. Crazy dancers aside, it's a lovely town and it fell to Cailean's charms immediately.
Posted by Ross Eldridge at 15:04

i'm giggling at the elaine-dancing gentleman, and as always, charmed by your cailean.
my young working student does dog sitting, and they just had a doxie, very high-strung and barked all the time. they hated him and couldn't wait for his owner to come back, even calling her on her cruise to express their disapproval of the little fellow. i'm not sure why people like this dog-sit. i'm even less sure why i've got them farm-sitting for us during our upcoming bermuda trip.
i mean, what kind of dog person isn't enamored with doxies???
:/ khairete
suz

My last dachsie, The Notorious Aleks, was high-strung and a constant nervous barker. Well, not if it was just me at home, but let anybody else turn up ... Your parents and Richard and Keith met Aleks and, I'm sure will recall being barked at for hours ...

Watched the film THE UGLY DACHSHUND last night ... what a hoot (I'd not seen it 40+ years ago) ... 4 mini-dachsies barking, which got my Cailean responding.

But hard to understand someone who doesn't fall under the spell of the "sausage dog" ... I could lead the kids of Amble out of town with Cailean, like the Pied Piper of Hamelin.

By the way, I asked my neighbour whether he ate all the meat on the many bones that appear at my door in plastic bags. The uncooked bones he gets at the butcher specially for Cailean!