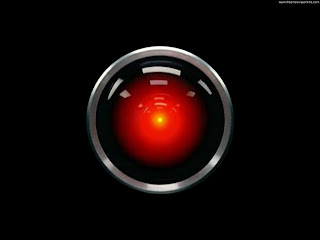 Daisy, Daisy, give me your answer do.
I'm half-crazy …
HAL 9000
I FIRST SAW THE FILM 2001: A Space Odyssey in July 1968 in a specially adapted cinema in Soho, London. It might have been on Greek Street, I remember seeing the street sign and thinking: "The offices of Private Eye must be here somewhere." I was a big fan of the Eye. I wasn't really a fan of science fiction, however. Happened that my mother was visiting me and we spent several weeks in London, staying in a B&B not far from Marble Arch, a school friend of mine joining us most days.

My mother had come across a remarkable package deal for accommodation, transport and entertainment in and around London. I think she had a book of vouchers which we exchanged at ticket booths and box offices. We visited Hampton Court, the Tower of London, galleries and museums, went to many films, saw some live theatre, and did some organised tours in the capital. My mother had visited most of the tourist attractions when she was a girl, and I had seen them too, but it was great fun having a shared experience. My school friend took us on a few expeditions that she had come across that were not listed in all the guidebooks. We traipsed through old graveyards at midnight, wandered in cellars below Charing Cross, and examined public loos with some historical interest.

2001: A Space Odyssey was filmed in Super Panavision 70, and certain cinemas that had specially adapted, deeply-curved screens, advertised it as a Cinerama experience. We saw it in Cinerama, and had seats in the front row of the balcony and benefited from that. It really was quite different. For someone who had seen most films in his lifetime on a diminutive screen in a tiny movie theatre in Bermuda, this was pretty far out. Not that the cinema in Soho was that large, but it was well-equipped with the latest gadgetry for 1968.

In 1968 my mother and I and my friend had seen Yellow Submarine at a cinema at Oxford Circus just before seeing 2001. Yellow Submarine was something rather different for someone brought up on Loony Tunes. I didn't know much about 2001: A Space Odyssey except that the reviewers didn't much care for it. I'd never heard of Arthur C Clarke or Stanley Kubrick. I had studied evolution in Biology and had heard that the film did depict, in some way, the evolution of man. I've since thought that might not be exactly true.

It was a fairly long film, broken by at least one intermission for ice-cream. Were the reels changed during those intermissions? I think I must have watched it in stunned silence, perhaps thinking "Whoaaaaaaa!" when Dave Bowman flew into the Star Gate. In Yellow Submarine the sequence with "It's Only a Northern Song" had a similar effect. When we left the cinema we were not sure about the film, what it meant.

I went and bought a copy of Clarke's book and I think I understood 2001 a bit better.

Over the last 41 years since July 1968 I have seen 2001: A Space Odyssey many, many times. I have seen it in cinemas and on the television. One does not always have the opportunity to see a particular film at a movie theatre over and over, year after year. Except for The Rocky Horror Picture Show. I have seen the RHPS at a theatre more times than I've seen 2001 at one, but I can easily recall seeing 2001 on the big screen six times. One of the more interesting theatres was the Olympus Starship on the eastern benches of the Salt Lake Valley in Utah in 1980: The theatre was built so as to give the impression that the viewers were in a space ship, and there were lasers and holograms along with Jefferson Starship's "Have You Seen the Stars Tonite?" before the main feature. 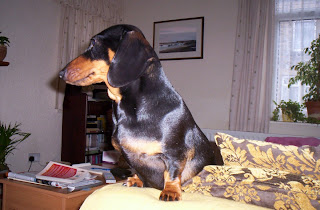 How many times have I seen 2001 on the television? It's one of those films I always tune in to if I see it listed, or stay with if I come across it while channel surfing. I have seen it three times since I got Cailean a year ago.

Cailean watches the television set intently and gets quite excited at dogs and when there are strange noises. He will bounce around and bark. 2001 really gets him going, from the moment the apes appear (dog-like, but I think the screeching gets Cailean yapping back). However, it is the beeping and buzzing and whirring that worries him the most. When HAL shuts down the life-maintenance systems of the crew members in deep-sleep Cailean goes quite mad. The colours in the Star Gate turn both Cailean and me on.

We watched 2001: A Space Odyssey again yesterday, a perfect activity for a Sunday afternoon. Cailean barked, I noticed things I had not picked up on during earlier screenings (the towels in the bathroom in the Louis XVI rooms in the last scenes). Of course, I got thinking. We are well past the year 2001 and we are not travelling to Jupiter in search of monoliths emitting signals (we haven't been as far as the moon in over three decades). Those black monoliths are sentry boxes placed by an advanced civilization. Yes? To keep an eye on how the Universe develops. Or did gods place them here and there? When Dave Bowman becomes the Star Child, is he reincarnated? Are the monoliths active or passive?

I hope I never figure it all out. I'd like to keep on tripping.
Posted by Ross Eldridge at 12:11

Interesting movie, that was, although I recently rewatched it without any of the fearful thrill I had the first time. I was kind of disappointed that I was sort of ho hum because I've remembered the feeling I had upon first watching it for all these years. At least it excites Cailean.