A Last Grasp at Summer 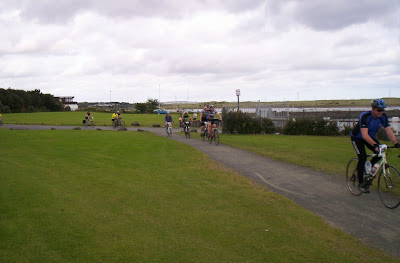 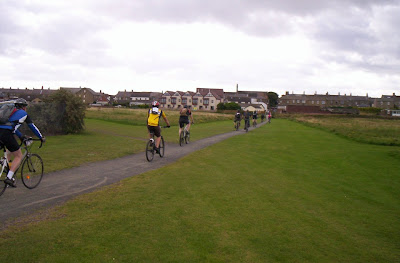 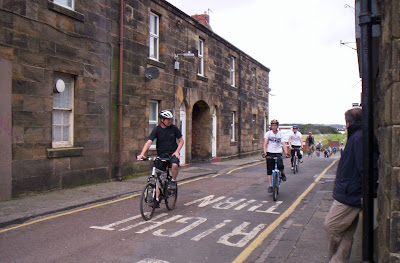 GNBR cyclists come up into Amble 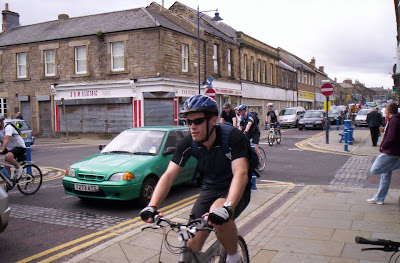 WELL BEFORE THE SUMMER HOLIDAYS ENDED, I was ready to head back to school, always a new form and new challenges. That was fifty years ago and I'm not so brave, and I have so many summers behind me, and precious few to look forward to, even if I live well beyond my parents' allotted life spans. One could get quite depressed over this sort of thing.

This is the August Bank Holiday weekend, and it has generally been a fair-weather time, though, looking out my kitchen window in late afternoon on the Sunday, the sky is leaden. My neighbour just loaded up the clotheslines in the courtyard with a couple of baskets of laundry. That seems to be inviting the rain, indeed, daring it. I dashed over to the minimart for some milk and a Lotto ticket earlier than usual, taking no chances. The forecaster on the BBC says it will be unusually warm tonight (though not compared to some places I have lived, we're going to be about 55˚F) and muggy. The forecasters don't use the word muggy too often. England is famous for its rain, but it's rarely oppressively damp. Muggy. The map shows great blobs of blue, for moisture, moving across the Isles from west to east tomorrow. We may reach 60˚F.

Amble had a pretty brilliant spring and early summer. May and June were quite warm and very sunny. I got a rather awful sunburn this year, and still have a bit of a tan after a rainy July and a so-so August. I think Amble was not unusual in its weather this year. Of course, Cornwall tends to be warmer and sunnier (why else the tourists and second homes?) and Wales is squishy with rain. Scotland seems to have drier areas, and it can be quite warm there in summer, but one has to deal with the midges. I'd rather freeze in the dark, thanks.

My flowers bloomed early and withered a month ago. The blackberries in the hedgerows have just about finished. I did get some for my cereal. We had some high winds in Amble earlier this week and more than a few leaves were loosened. Last year there was a day and a howling gale and autumn happened in hours rather than weeks. Autumn of 2007 had been glorious and golden. One wonders what the next few weeks might bring. Will our greenery be reduced to sticks and odd berries? Last year Cailean, only six months old, discovered the joy of burrowing into heaps and layers of leaves on the pavements and lawns. By November he was ploughing into his first snow.

I've just received a copy of the Alnwick Playhouse's schedule for the autumn and winter, at least through January 2010. A good deal of Christmas fare. It's not easy feeling in the Christmas mood on the penultimate day of August. Two months from now, I'll be in better shape for that, I imagine. I'm going to see a Fleetwood Mac tribute in mid-September with some mates, and will probably be wearing a sweater with my jacket, but it takes an overcoat to get me fancying Silver Bells and Pantomimes.

Today, in the northeast, we've had The Great North Bike Ride. This is a 54 mile bicycle ride (not a race) from Seahouses, a coastal village north of Amble, down the coast road to Tynemouth Priory. The cyclists pass through Amble, entering the town on the Coastal Path, crossing the Braid by the Marina, going over the narrow walkway bridge across the Gut, a little stream, then through the town's narrow streets and off to the south to the next town.

The cyclists waved as Cailean and I watched them on the loose gravel along the River Coquet, I took a few photographs.

The regular Sunday open air market was on today, and a fair in aid of the Royal National Lifeboat Institution. We have an RNLI station here in Amble. There were simulated rescues in the Harbour involving people, boats and a helicopter, and activities, games and the like at the back of the beach. I passed on this, though I could see the helicopter as I live close to the Harbour.

Our main drag, Queen Street, and the Town Square, were packed with pedestrians and vehicles, including cyclists, today. Unfortunately, not all our shops opened for the day and there were unattractive shutters rolled down. A more tourist-conscious town council might have tried to get everything open and sparkling. Amble never quite makes it as a picture postcard.

And at the end of the day the helicopter will fly away, the cyclists will be near Newcastle, the day-trippers will have moved on, and the visitors staying at our caravan and camping sites will be planning their voyages back to less exciting places inland tomorrow. Schools will soon resume classes.

At the beginning of August, Selfridges's famed emporium on Oxford Street in London opened its Christmas shop. What the hell? I thought. They have artificial trees, ornaments and lights, and other decorations on sale so early because, they say, the many tourists are interested, and the pound is favourable to folks from overseas with stronger currencies.

Then, a fortnight ago, the city of Rochdale in Lancashire put up its public Christmas decorations. When people said they thought four months might be a bit too early, Rochdale said it was putting up decorations for all the faiths that celebrate something between now and the year-end. And it's cheaper to get the whole lot up together when the earliest festivals begin. I'm sorry, but I don't want to see Santa Clauses and Snowmen on the utility poles in mid-August.

In another town, shops that sell Christmas greeting cards were warned that if they put out their stock before the first of November, their shops would be vandalised. Their letterboxes would be super-glued shut. Sounds reasonable enough to me, but I'm not going to damage the local Oxfam which has its cards inside when illuminated snowflakes are decorating Rochdale's shopping district. And I don't believe Selfridges is making a bomb selling white, glittering reindeer to Americans and Saudis right now, no matter what they'd have us believe.

I have been buying books for the winter. Most are second-hand from Barter Books in Alnwick. And I have some DVDs to watch and re-watch. I've bought a new tweed jacket to replace the one I've had over twenty years which had become rather worn and, to be honest, difficult to button up. My overcoat will last another year, and I have warm-weather accessories. Cailean's two overcoats are almost "as new."

I had best finish this up, Cailean wants to nip outside for a pee, and I should have a cup of tea and some biscuits. I turn into my father at this time of day.

Summer's lease hath, indeed, too short a date.
Posted by Ross Eldridge at 17:19

love the pics of amble and your glimpses into the quiet sweetness of your and cailean's life there. love that your main street is queen street.
i'm not quite as blue as usual at the prospect of winter, but summer's end is always hard for me. i was out wandering around midnight last night, and there were several dying fireflies glowing weakly in the chilly grass. that's always the big sign for me, even more than the bright patches of autumn leaves showing up in the trees, and they always make me cry a little. i know they're just bugs, but there's something so fatally gallant about those doomed little fellows, carrying their torches defiantly into the long night.
christmas is WONDERFUL in its time. that time is not yet. retailers who try to cash in on it early are really just working to spoil the magic. asshats. i'm only just allowing anticipatory thoughts of halloween to tantalize me.
today's normal weather is the high 70s to low 80s, but it's low 60s, rainy, with tonight's RealFeel predicted to hit the 40s. i may have to light a fire to ward off melancholy.
khairete
suz