Pretty As You Feel 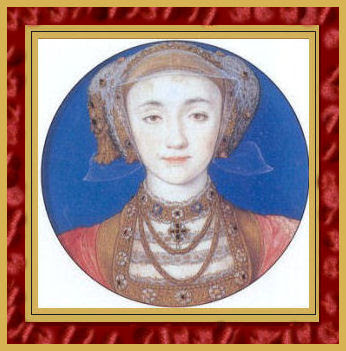 You're only pretty as you feel
Just as pretty as you feel inside
When you wake up in the morning
Rub some sleep from your eye
Look inside your mirror
Comb your hair
Don't give vanity a second chance
No no no
Beauty's only skin deep
It goes just so far 'cause
You're only pretty as you feel
Jefferson Airplane (Pretty as You Feel)
I AM WATCHING THE TUDORS. Series 3 has almost finished its run: Henry VIII has his son, by Queen Jane Seymour, but lost Jane just days later. That is historically accurate. On the television programme, Queen Jane was extraordinarily beautiful in life and death. After she's gone, as Henry mopes about the palace with his talkative Court Jester, the Jester says something along these lines: "Bad luck! You have a beautiful queen with fabulous tits; she gives you your son, and then she dies. Bad luck!" These were not quite the words we read in our history books when I was a boy, but they certainly describe the Queen Jane on TV. Apparently, according to the historians, diarists and portraitists, the actual Queen Jane was no great shakes. She was a bit of a meddler and was more Roman Catholic than Protestant supporter of her husband's Church of England. And her face never launched a thousand ships. She may have had fabulous tits.

Next week, King Henry is going to have a meet and greet with Anne of Cleves. Fifty years ago I first saw a film that was then old, The Private Life of Henry VIII, starring Charles Laughton. Laughton's real-life wife, Elsa Lanchester, played Henry's fourth wife, Anne of Cleves.

And here's a family story: My grandmother checked into a hotel in, I believe, New York City, back in the 1930s. She had made a reservation prior to her arrival. And what a fuss was made when she turned up! She was treated like a movie star! My grandmother's name: Elsie Lancaster. She was about two years older than Elsa Lanchester, and English born.

Elsa Lanchester was a not-so-unattractive Anne of Cleves. She was better looking than my grandmother. So it goes.

In The Tudors, the ugly Mare of Flanders, as Henry is said to have dubbed Anne of Cleves, is being played by pop musician Joss Stone. Ms Stone is quite easy on the eye, probably the delight of any number of teenage boys, and their louche grandfathers. Has the director told her to step in front of the camera and look as dreary as she can? Not from the film clips in the previews. Beauty is the new beast.

Let's talk Henry VIII in The Tudors. Jonathan Rhys-Meyers is playing the King, and he's about as unlike the Hans Holbein pictures that decorated my history texts and art books back in the day as one can get. I cannot say I like Holbein's cartoonish work. I rather like Rhys-Meyers in his films: He tends to androgyny, being both masculine and beautiful, someone one might find in an Edward Burne-Jones painting in full colour, or outlined by Aubrey Beardsley in black ink on white paper.

As Henry prepares to meet the unattractive Anne, he is in bed (on The Tudors at least) with his gammy leg playing up merry hell. In fact, slender, young, exquisite Rhys-Meyers is turning up, as if posed for the pre-Raphaelites, wearing nothing at all but for the smallest strip of cloth from the sheets he's reclining on covering (just) the Crown Jewels. The Tudors would have us believe that Henry VIII waxed all his body hair and glowed attractively, despite the painful eruption on his one thigh. And when the pain strikes Henry, I'm reminded that the French refer to the orgasm as la petite mort, or little death.

Henry marries Anne of Cleves, but the marriage is not consummated and is quickly annulled. I have read that Anne not only stayed in England, but that she was welcome in the royal circles. In The Private Life of Henry VIII, Elsa Lanchester played cards with Charles Laughton, and they got on rather well. In real life, Elsa Lanchester's tell-all biography claimed that she'd been childless because husband Laughton was homosexual. 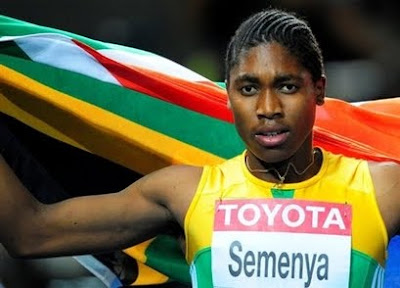 These past few weeks, we've had the sports scandal over South African runner Caster Semenya. Semenya won a notable race, though she did not quite break the world record for that distance. Semenya was running as a woman. Now, to be quite honest, nearly all female sprinters and distance runners seem scrawny to me, though many, most even, look feminine. Caster Semenya didn't, not to my eyes, and others thought the same. Was Semenya a girl after all?

Is it racist, as the South African government is claiming, to question the gender of a black runner who ticks the female box when she's filling in her race application form? Race as in running, not as in ethnicity. I believe the question was raised because it was thought Semenya might be taking drugs. Is it racist to wonder about that?

As the world knows, Caster Semenya has been discovered to have no internal female organs (womb and ovaries), but has a couple of male parts (testicles) tucked up inside. She is getting an extra dose of testosterone, three times the usual amount, which is almost certainly affecting her performance on the track. Is that a problem? Should her female competitors have the right to inject themselves with the stuff to make their performance on a par with Semenya's?

The doctors claim that Semenya's undescended testicles are a cancer risk, and should be removed. That would, I'm thinking, affect her hormone levels which will affect not just her physical being, but her emotions. The South Africans, who have a pretty shoddy record when it comes to treatment of females, claim that there is no such thing as a hermaphrodite, so hands off Semenya… she's a South African girl. Many South African men believe having sex with a virgin child can cure AIDS. The last President of that country refused to believe that HIV and AIDS were connected. Don't forget female genital mutilation. Will Caster Semenya suffer for South Africa's blinkered outlook on life, indeed ignorance? 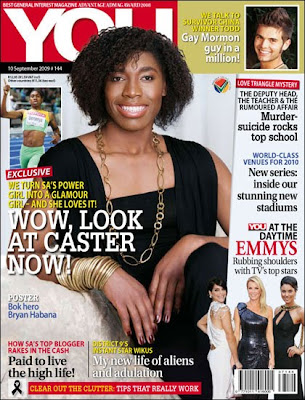 So, a magazine shoot and cover featuring Caster Semenya all dolled up. She's not as gorgeous as, erm, RuPaul and Wendy Williams, but, apparently, she loves the look they've given her.

I hope that Caster Semenya manages to lead a healthy life, and that sensible medical science can help her if she needs it. And if she feels fabulous, at home in her girlish body, rather than her boyish one, I hope the world will let her be. Perhaps South Africa can lead the world in accepting people for what they are, how they are born, what they feel themselves to be. Out of Africa … Tolerance.

Email ThisBlogThis!Share to TwitterShare to FacebookShare to Pinterest
Labels: Caster Semenya, The Tudors

Hi Ross, and thanks for your recent visit to my blog. It's nice to be back, and you remind me, with this post, that there is always something to write about.

I enjoyed your historical ramblings and the description of the various movie and TV Henry the Eighths.

I'm afraid I am so far out of the loop with these new actors that I thought you were referring to John Rhys Davies instead of the androgynous Jonathan Rhys-Meyers. Rhys Davies is certainly not effeminate.

I did look Rhys-Meyers up on the Internet and realize I have seen him before, but, as you know, we are at the end of the road and movies aren't on our itinerary these days. I used to love going to the movies, though. Maybe we will do that again one day. He seems to have taken the place of Anthony Perkins who always played parts, it seemed to me, of someone who was confused about his sexual orientation. But that was back in the dark ages when the closet was very big and lots of people lived in there their entire lives.

The runner from South Africa... what to do? What to do, indeed. I agree that tolerance is needed, but I suppose if I were a female competing aginst her I might feel differently. And there lies the complexity of life outside the closet.

i really need to get my hands on the tudors. the one episode i saw was the one you describe, with the surprisingly pretty anne of cleves (she looks okay in her pics too, not nearly the beast old harry said she was). i don't think for a second that HVIII was anywhere near as sexy as rhys-meyers and i don't care a rap. you check out jane's titties and i'll go all dirty old lady over the king.
androgynous is the new macho.
;) khairete
suz