Children of the Nightclubs 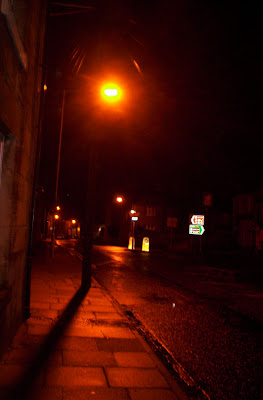 Why day is day, night night, and time is time,
Were nothing but to waste night, day and time.
William Shakespeare (Hamlet. Act II, Scene II)

I WENT TO THE ACE OF CLUBS ONLY ONCE. I can only think that I went for the live music: A rock band played at one end of the room. At the opposite end was the bar, which stood some distance from the wall behind it. Instead of the usual behind-the-bar accoutrements being displayed on that back wall, they were under the top of the bar and to the sides. The back wall was stained and scratched, and I soon realised just why. When a bottle had been emptied, the bartender flung it at the back wall where it shattered and the shards fell on the floor. A few glasses went that way as well, courtesy of the patrons.

Of course, in the nightclub at the Carlton Beach Hotel in Bermuda at this time limbo dancers entertained the drinkers by ducking under flaming poles, and some of the entertainers danced on broken glass. Nothing thrills drunken tourists quite like natives performing dangerous routines. I cannot say that I found the act at all compelling, and would, in any case, have been deep in conversation, solving the world's troubles. Of course, I cannot recall those discussions, but I imagine the Vietnam War got a mention. I was usually with shaggy Americans.

The Carlton Beach changed its name to the Sonesta Beach. I once left the nightclub at the Sonesta and walked directly out to an Easter Morning sunrise service on a rocky outcrop in its grounds. I was last at that hotel in 1978, New Year's Eve, and reluctantly joined a conga line. That night I was with most of the off-duty members of the Canadian Armed Forces Base in Bermuda. That seems awfully strange now. The last time I saw the friend who'd invited me, we were in the nightclub at the Grotto Bay Hotel, which was situated in an underground cavern, with dripping stalactites. You had to cover your glass, obviously!

I liked the short-lived Guinea Discotheque on Burnaby Street. Deafening music and packed in like sardines. One went up a narrow staircase to reach the place, and I can only think it was an incredible fire- and health-hazard. The Guinea was so small, crowded and loud that it felt as if one was inside a stereo system. I only went a few times, and don't think that disco ruined my hearing. I am quite deaf now, but it is from fifty years of loud music. Now I have to have my music (and the telly) loud to hear it at all.

I do not remember whether the nightclub at the Hamilton Princess Hotel in Bermuda had a name, but just outside the door was the Colony Bar where we'd indulge in a ritual before heading into the club itself. The bartender, who I want to call Cedric, would pour us each a shot glass of Gosling's Black Seal Rum. This rum is, as far as I'm concerned, as noxious as those Night Nurse tonics, and then some. Have you ever sucked up some petrol when you were going to drain some from a friend's moped when your tank had run dry? Vile. We'd not drink the stuff. Once Cedric had gone back behind the bar (we always sat at a table) we'd set the shot glass on fire. The rum would flame up beautifully, and then, suddenly, when the rum ran dry, the glass would shatter. We drank Bacardi and Coke with more respect.

One night we had a visiting pen-pal of a friend in tow. She, foolishly, drank her shot of Black Seal. Shortly afterwards she ran to the toilets in the hotel lobby, but did not make it. She vomited up black juices and her dinner, down her white touristy evening frock, all over the lobby carpets, and on into the toilet.

In the early 1970s there were basement clubs in London. You'd knock at the door, a panel would slide across, and you'd be let in. I'm not sure why we were let in, but it may have just been a case of knowing the place was there. The pubs would often have a club atmosphere with a rock band. I recall eating dinner below glass blocks in the pavement above a club while a singer covered every song on Simon and Garfunkel's Bridge over Troubled Water album.

In 1979 a friend took me to a nightclub in Ann Arbor, Michigan. We'd been out to dinner in a hotel; the restaurant was on the ground floor. After we'd eaten, we took the lift up to the roof where there was a swimming pool, and sat there for a while, waiting till the clubs opened. Suddenly a couple of policeman burst into the otherwise-empty pool area and told us that an escaped criminal had run into the hotel and had taken a lift upstairs. Just where, they were not sure. My friend and I figured that a truly desperate person might head for the roof for a last stand. We pressed the button for the lift and hoped it would arrive empty. It did. We headed across the street to what turned out to be a gay discotheque. That was a first for me. I was so freaked out that I didn't pay all that much attention, and wish I had as I've not been in an exclusively gay discotheque since. The music was classic: It was raining men, people's bells were being rung, and they survived. Or perhaps not, this was before AIDS.

A couple of years ago I went to a club called Blue Juice. This had a large contingent of gays, but, frankly, the straights were looking pretty gay too. Blokes that looked like steelworkers and stevedores were hanging all over Goths and Emos and transvestites. The music was Madonna, the entire club was filled with the smoke from dry ice, and films were being projected on the walls. I felt very old, though Madonna is not ten years younger than I am.

Last night I stepped outside with Cailean when I'd heard the rain ease up. It was about eleven o'clock. Out onto the High Street (I'm an Exile on High Street) and there was no sign of life. The Wellwood Arms nearby, which had been featuring live bands until two months ago, has closed down. The Zecca Ristorante, which opened recently, stops serving at 9.30. And that's the High Street in Amble at night. To be fair, there's a dental office open in the daytime. The rest, last night, was a row of darkened windows and bleeding reflections of our few streetlights in the puddles and damp air.

There's a pizza take-out further down on Queen Street. They will deliver to your home if the order is over £5 and charge you a quid for bringing it round. I don't think they can be terribly busy as I can always have a pizza delivered in 20 minutes. They close at midnight.

To think one of my duties at AIG was to organise the Christmas Party each year I was there. This was held in the daytime (it was a luncheon) but always in a darkened nightclub at a hotel. Perhaps my boss realised I'd come to work from time to time still a bit tipsy, and tired, having left a nightclub three or four hours before. If you can do that, you can sort out drink-tickets for a pack of alcoholic accountants and hard-drinking underwriters. Now, I watch the telly till the wee hours, read and read and read, and when I go out in the night it is to walk Cailean to a cobbled area twenty feet from my door where he likes to pee. Then we run back inside to warm up again.
Posted by Ross Eldridge at 18:15