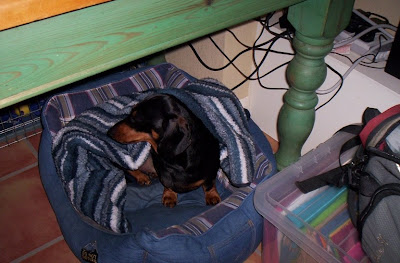 Where the bee sucks, there suck I:
In a cowslip's bell I lie;
There I couch when owls do cry.
William Shakespeare (The Tempest. Act V, Scene I)

WHEN I GOT HOME THIS AFTERNOON and opened the kitchen door, I was shocked when Cailean did not run straight over to me. Usually he does this, all waggy-tail, and puts his front paws up on my shin. If I’ve been away some time, as I had today, my first duty is to put Cailean in his harness and get him outside to pee. He knows that.

Two o’clock this afternoon, after being away six hours, there was no sign of Cailean in the locked kitchen. There was, however, an extremely loud buzzing noise. I called out several times, and looked under the table and found a lump in Cailean’s bed. I lifted his thermal blanket and there he was looking up at me, rather concerned, I thought. Then he hopped out of his bed and ran into the front room. The buzzing in the kitchen continued uninterrupted.

I have smoke detectors in the flat; the buzzing noise was a completely different sound, much lower, but it seemed almost as loud. And it was coming from the window behind the kitchen sink. Cailean watched from the door on the far side of the room, and I fiddled with the net curtains. And found a gigantic bumble bee. One of those 747-type bees. How the hell do they get off the ground? How can they move about?

I’m not into killing things if I can possibly help it. Happens that in the car coming home we had to do some fancy driving on a country lane to avoid a cock pheasant. Our car was red and the male birds are attracted to anything red during the mating season. The pheasants are not suicides when they dash from the fields; they are just defending their territory. One sees more of them dead than alive just now. I hate to see the bunnies and hedgehogs that poorly time their crossings. Fewer dead badgers, but there are fewer of them in the first place. It's all distressing.

I don’t kill bugs either. My mother always said that it was bad luck to kill a spider in the house. My mother was a nutter; she didn’t practise what she preached. It proved the point though, our luck was shit. My early memories include my mother armed with an enormous Flit gun which she would pump all through the house, poisoning us as much as the ants and flies and cockroaches that were standard occupants of a house in Bermuda. My childhood memories stink of the oily Flit spray, especially in the summer. In the winter our kerosene stove, burning away in the middle of a room, gave off fumes enough to kill anything that wasn’t hiding under a floorboard somewhere. I’d be naïve to think that we came to no harm breathing all that poison.

In my flat in 2010 - 3,500 miles and years from Bermuda – I have the occasional spider. They come up through the bathtub drain, I think, as most of them turn up in the bathroom. The old joke goes: What have an old age pensioner and a spider got in common? They both need help getting out of the tub. My spiders, so far, have been fairly large and I have been able to pick them up with a bit of tissue, without crushing the beasties. They don’t seem to mind going outside in the courtyard at this time of year, but they do look rather stunned when there's ice and snow in the garden. I think they head straight for a warm drain and make their ways back to the bathroom.

I’ve never had a single ant inside the flat. After my Bermuda experience of ants – they'd materialise by the thousands in a minute – it seems odd not to see very many insects. They must be out there somewhere, but not around the house. We have a few wasps every mid-summer; one needs to brush them away as they can sting. And then, each year, I might see half a dozen great big bumblebees. Not in a little swarm, mind you. A single bee will struggle over the garden wall between my courtyard and the Catholic chapel next door. The Catholics have wonderful roses in their garden (along with an almost-life-size Jesus on a cross near their wheelie-bins) and I don’t know why a fat bee would expend the energy it takes to fly over a ten-foot wall when I have but a few Protestant (well, Atheist, I think) petunias and the odd daisy.

In Bermuda there was a van that would stop at select locations near the beaches (this before ugly, permanent, concrete-block eateries sprouted in the pink sand) and at parking lots in the city of Hamilton. This van, more of a wagon, sold hotdogs and hamburgers and soft drinks. It was fondly, perhaps accurately, referred to as the Roach Coach. I never, ever sampled any food from the Roach Coach, and I never knew anyone who did. I saw an ice-cream wagon in Morpeth last weekend. It was bright red (did it have pheasants in its grill?) and had the oddest name painted on it. MISTER WHIPPY. That’s a turn-off for me, frankly. We have an ice-cream wagon in Amble by the Sea. It plays the tune “Yankee Doodle” very loudly as it crawls around our few streets. Do American ice-cream wagons play “Rule Britannia”?

Back to the bee in my flat. I have a very large kitchen, it must be 18 feet by 18 feet, and there’s a smaller porch attached as well. I probably should have closed the door to the front room, but Cailean was sitting there anxiously watching. I lifted the net curtains and the bumblebee slowly flew out, very nearly hovering. When it crossed the counter I lowered a clear drinking glass from the drainer over it, and then down onto the surface. I had an envelope within reach and slid that under the glass, the bee being helpful and jumping up a bit. The noise of the bee buzzing in the glass, the paper trapping him there, as I carried it out into the courtyard was extraordinary. I wonder if one could have a musical instrument using different size bees, different size glasses, varying thicknesses of papers.

In the film “Sunday Bloody Sunday” the doctor had tubes of different lengths in his garden that were filled with coloured liquids and they played “Soave sia il vento” from Mozart’s “Cosi fan tutte”. I’m thinking something along those lines, with bees.

My bee, released in the courtyard, despite hours of captivity (it must have come in before I left the flat at eight o’clock), buzzed up and over the garden wall, to sanctuary at the Catholic Church.

The flat is buzz-free, quiet. Not even a Twitter. And I’m going to read in silence for a few hours till bedtime. Unless I laugh, it’s a funny book that I’m reading.
Posted by Ross Eldridge at 19:46