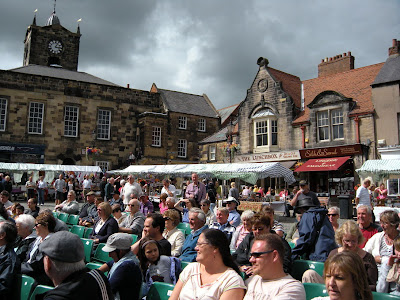 You should make a point of trying every experience once,
excepting incest and folk dancing.
Arnold Bax (1883-1953)

IN ANOTHER LIFE, a fairly recent one, I would, from time to time, review the arts. This was in Bermuda, for the weekly newspaper, the Mid-Ocean News, that has recently been put out of business by the machinations of Bermuda’s dictatorial government. Now and then I’d write a review for the daily paper, the Royal Gazette, which is now in the cross-hairs and, I believe, struggling.

I had no training as an arts critic, or as a journalist of any kind. I’d failed my “O” Level English the first go round. I had been an amateur painter, very amateur. However, artistic ability does run in my family, both sides. I should not be allowed a paintbrush, but decades of writing letters made me dare to pick up the sword. I mean pen.

The Mid-Ocean News had an arts critic, and rather a good one. She died. I applied. Eventually I received $100 a pop and a pair of free tickets if I was to look in on live theatre or music. I simply wrote down my own personal impressions of the exhibition, the musical, the dramatic presentation, and I think I was honest and did not ever try to gild a turnip.

Well, that is history. And before I continue, a few words about beginning a remark with the word well. When interviewed, many (perhaps most) will reply to a question with “Well ...” and that’s frowned upon. I know that full well, but thought I’d bring it up here so that you know how to respond the next time a television or newspaper reporter approaches you and asks if you have anything to say about the show. Don’t say: “Well ... it was rubbish.” Just say: “It was rubbish.” Or you might roll your eyes heavenward and say: “Rubbish!” Or smile widely and cry: “Brilliant! Absolutely brilliant!”

I was in Alnwick yesterday with some friends, under mostly sunny skies. This is unusual during the Alnwick International Music Festival, an annual event, which began yesterday in the Market Square. Seems to me that in recent years I’ve had to dodge degrees of rain and some of the performances have been moved inside with a resultant smaller seating situation and all the fuss of setting up the sound equipment again at short notice.

The host at yesterday’s afternoon performance told a large crowd the very same jokes to fill the gaps that he told a year ago, and two years ago. They were not original jokes when they entered his repertoire. Advice from me: Retire the one about the lady hugging the frozen cows, thus saving their lives, in wintry fields. You know the one: the mysterious lady’s name turns out to be Thora Hird. There are many tourists at the Alnwick Music Festival, and I dare say Dame Thora is a complete stranger to them. “Must be Geordie humour?” For Pete’s sake, Thora was from Morecambe, Lancashire. Not one of ours. The little children, the locals, won’t get it either. The host, by the way, is the Town Crier. He was not dressed up like Sergeant Pepper, but in clothes that made me think he’d been fishing. Nice clothes, but country-country, not country-town. Perhaps this is his take on folk? The same clothes (I’m not sure about his undergarments) right down to (up to?) his hat that he wore in 2009. 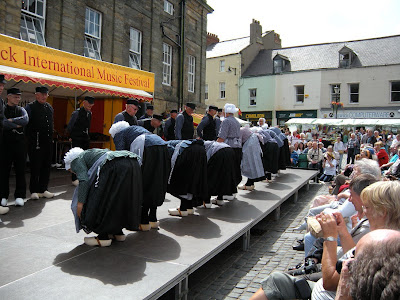 The main event yesterday afternoon was a group of Dutch dancers called De Speelluden. Is that not a wonderful word to roll off the tongue? De Speelluden. The group was formed in 1967, but they are hardly Sixties rock and roll. What these men and women do is perform the peasant dances of the Westervoort part of the Netherlands that were customary back in about 1900.

The men dressed in black uniforms that made me think of railway employees as depicted in the movies, complete with watch-chains. Railway employees anywhere in the West, from Santa Fé to the Swiss Alps. The women wore dark peasant garb with grey aprons, working clothes, and one might think of pioneers in the Americas. Rather over-dressed, as one was forced to be by modesty. How many Dutch women got hooked on the sails of windmills as their skirts billowed about? Odd lace caps. And the men and their womenfolk all wore whitewashed clogs. Great big heavy clogs. Lethal weapons. The English might fling Wellies, and they’d be no match for these clogs.

The visiting De Speelluden dancers were all getting on in years, at least one long white beard worthy of Rip Van Winkle. I was near the stage as they went on and they spoke in Dutch, and the one member of the group who read from an English script did so with a thick accent. The dances were all rather alike, perhaps 8 or 10 women spinning around with 8 or 10 men. There was a dance about a girl who fell in love, at first sight, with a boy who lived in a windmill. Nowadays she would fall for the son of an industrialist who was blotting the countryside with wind turbines. There was also a dance about sunflowers, celebrating autumn. Perhaps Vincent van Gogh saw his sunflowers as autumnal things, rather than window dressing. Van Gogh’s work is so often of a seasonal nature.

The lady, reading slowly from her papers, said they would dance “The Waltz of the French Beasts” for us. It tells the story of the terrible “tummy pains” caused by those “French Beasts”. This certainly made me sit up. Those bloody awful Frenchmen invading Holland, raping the women (getting them knocked up) and stabbing the Dutch men in their guts. The dance was a bit of a spin around the stage, the accordionists playing, it must be said, in ¾ time. There was no doubling over at the waist in apparent anguish, and I thought we might be getting the children’s version with so many youngsters in the crowd. I was disappointed. When the spinning stopped, the lady read a little more from the script and suddenly I realised that I had misheard. This was “The Waltz of the French Beans” and the abdominal aches would have been from gas and not from pointy weaponry.

Three pairs of men did a dance that seemed to be showing what Dutchmen do when the pubs get out and they are quarrelling over one of the pretty girls. They thump one another with their chests and shoulders and stick their thumbs in their ears and waggle their fingers at each other. Brilliant! If Michael Jackson had done this in his act he’d have really been acclaimed for his dancing. 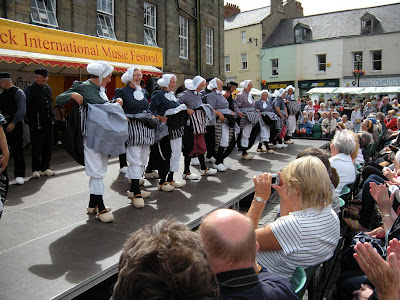 The ladies showed us their covered backsides, and I have no idea why. They then showed us their knickers. Nothing that floated my boat, but enough cloth to make sails with. And the ladies pulled open flaps on the fronts of the men’s trousers to reveal the male equivalent. This must pass for entertainment in Westervoort.

Holland is not all that far from here. People go down and across to Amsterdam by overnight ferry. De Speelluden certainly seemed strange and exotic for something a few hours away by boat.

Should one go to see folk dancing in Alnwick? Why not? It’s a fun day out and (it’s raining today) something to take one’s mind off the usual English summer weather. Should one learn to folk dance? I dare say there’s an arts critic in Westervoort who would find a Morris Dancing group from Yorkshire totally baffling, quite silly with the sticks and bells, and lacking any references to wind (windmills or French beans). I should probably stick with what I know. Shuffling in a crowded disco.
Posted by Ross Eldridge at 17:54

Well, (oops!)... hilarious as always, and for some beans can be beasts!

These simple outings are part of summer. Thanks for sharing yours. The photos are great. Your new Nikon is doing a good job!

How droll. Sorry I missed it. Busy having migas con jalapenos y frijoles.