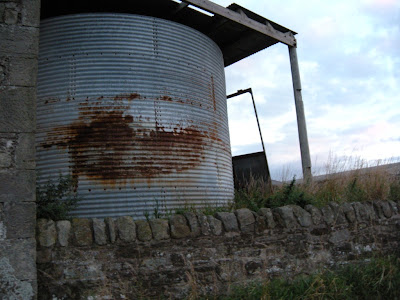 Change your opinions,
Keep to your principles;
Change your leaves,
Keep intact your roots.
Victor Hugo (1802-1885)


I WORE A SWEATER YESTERDAY, as well as my corduroy jacket, and did not feel over-warm. The ghastly metal seat in the Alnwick Bus Station was really rather cold on my backside; I shall soon have to get my winter trousers down from the suitcases atop my wardrobe where I store them for the two or three months that pass for summer up here.

Yesterday’s slight chill is today’s howling gale from the north, and genuine cold. The BBC weatherman used the “F” and “S” words. Ground Frost in Northern England by Friday night, and Snow in the Scottish Highlands by weekend. I live less than 50 miles from Scotland. The first visible sign of winter in Amble is usually an open flat-bed truck come down from Scotland with an unintentional load of snow. I should point out that one’s breath shows in the cold morning air well before the imported precipitation, and I’ve noticed mine as I wait for the car for over a week now.

We had wonderfully coloured autumn leaves in 2008, and then last year, in early September, we had a sudden violent windstorm which withered most of the leaves here on the coast in a day or two. The leaves fell to the ground and blew, I think, into the North Sea before the week was out. They vanished! Autumn’s lease, like that of summer, had all too short a date. One did see some colours in forested areas inland, but nothing compared to 2008. I am watching the plants in the courtyard being blown about; they are somewhat protected. The cables and power-lines above the street are snapping about in the wind, so it’s safe to assume that the bigger trees in town are shaking like a Hawaiian hula-dancer.

There were American and Japanese tourists on the bus yesterday, most of them dressed in summer clothes. Shorts, t-shirts and blouses along with their Foster Grants. The bus hauled a fair number of them from Alnwick (their shopping bags indicated visits to the Castle with its Harry Potter connection and the Alnwick Gardens) over to Alnmouth Village. The usual anxious questions from our visitors: “Are we there yet?” “Will the pubs be open?”

There was an English couple on the bus; I’d guess a husband and wife. Older, dressed for winter, and dressed in rather more formal clothes than the foreigners. I’ll add, to be honest, this couple looked rather shabby, unkempt. They were sat together across and a few rows in front of me in the seats indicated for elderly and infirm passengers. The woman pressed the bell and the couple stood up. The signs on the bus tell us to ring the bell, but to remain seated until the bus stops. I am the only person I know who does that; even the most wibbly of the wobblies insist on rising and making their ways to the door, even as the bus thrashes about. I noticed that the gentleman with his rumpled collar and poorly-knotted tie, old grey-green suit, and a yellow cardigan, had a white stick. He turned back my way, his eyes clamped shut, and it was obvious that he’d come to town without his dentures. His wife called out to the driver: “We can’t see. We want the stop across the roundabout, past the Royal Oak.” They moved along the bus. I knew she’d got it wrong, there is no Royal Oak in Alnwick, it is The Oaks Hotel. The driver brought the bus through the roundabout, which the old lady could sense, and she started calling loudly: “This is the one. This is the one. Stop!” though we hadn’t actually reached the bus stop. She was quite anxious. The bus jerked to a halt and the driver and everyone on the lower deck of the bus watched the blind couple feel their way out of the bus and onto the pavement. Once outside, the man held onto the woman’s arm and began tap-tapping his stick (it was an ordinary walking cane that had been painted white except at the curved handle). They shuffled away, as winter, while those of us on the bus, summer and autumn, rolled on towards Alnmouth. 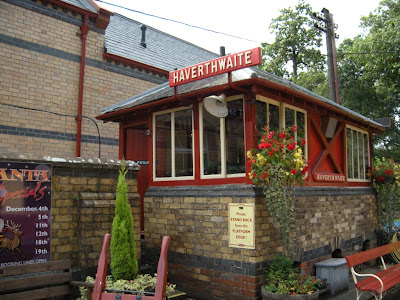 Weekend before last I went on a day-trip to Bowness on Windermere in the Lake District. Somehow the weather cooperated and we had brilliant sunshine until late afternoon. We’d taken a coach to Haverthwaite where we boarded a steam locomotive and took a really, really slow trip over to Lakeside. In Lakeside we visited an aquarium, and then everybody except me and our coach driver took a steamer down Windermere to Bowness. I opted to do the drive as I do not like boats and with my brother dying in a boating accent last March I’m now totally boat-phobic. 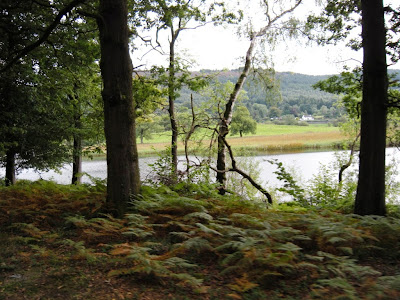 On the train, and during the coach ride around the lake to Bowness, I had some wonderful views of the English countryside. So lush, so green, I have decided that when I win the Lotto I shall buy one of the large estates near Windermere that we passed by. I am wondering, of course, whether all those leafy trees will be as bare as ours in Amble in a matter of weeks. Trees and men are subject to autumn and winter.

On the way back from the Lake District, crossing the tops of the Pennines, we moved slowly through a barren landscape, just low scrub and rocky outcrops. The ubiquitous loose-stone walls were not in evidence, the only barrier between the land and the highway was fencing. There were a very few stone cottages, none looking habitable. A most desolate place. And we passed a small herd of camels. It must be pretty boring up there, even for a camel, as the beasts were standing at the fence watching the traffic go by. The camels would not be surprised by the cars and coaches, for that is their lot by night and day. For me, on the coach, listening to Jefferson Airplane on my iPod, it really was a most unexpected sight to look out at dromedaries. Will they be up there come the snow?

There’s an apple tree in a garden just along the street from my flat. This is the first year in five that the tree is truly burdened down with apples. They are starting to fall, in the grass and some onto the pavement. None are gathered up and I wonder if they are sour. D.H. Lawrence wrote a poem about the falling of apples to the ground in the autumn, making the point that it is only in the fall to the earth and the bruising of the fruit as a result that the seeds inside are released and the cycle permitted a complete rotation. I believe Lawrence was thinking, also, of the advancing years of man, and that it is the ripe, fully mature fruit that gives rise to the new tree in the spring. Lawrence was only 44 when he died back in 1930.

One sure sign that autumn is arriving is The Last Night at The Proms. That was last week. The Promenade Concerts from the Royal Albert Hall in London run through the summer, and some are televised. I rather enjoyed a concert devoted to Doctor Who. I noticed that the audience was more than half young children, nice that many were with their fathers (rather than mothers). I’ve been following Doctor Who, off and on, since the 1960s. I’m more of a fan now than ever. Are my years running in reverse here?

Every year, when it is time for the grand finale of the Proms, I decide I won’t watch as it will be a bit silly with toffs wrapped in Union flags, bobbing up and down to a hornpipe, and then breaking out into “Rule, Britannia” and “Jerusalem”. However, each year I do tune in, just to see who the female soloist will be. The soloist and the conductor always have a chat with the audience on the Last Night, usually something quite amusing.

So, I switched on my telly, dialled up the BBC, and listened to some rather nice pieces by Richard Strauss. The soloist this year, American Renée Fleming, was splendid, dressed up like a ship of state and beaming.

There were Union flags aplenty, and a good many English, Welsh and Scottish national banners. I’m not too good on flags of the world, but did spot a Canadian flag and some from “down under”. Ms Fleming had a small “Stars and Stripes”.

And the audience sang along with “Jerusalem” and not just in the Albert Hall, but in vast crowds outside in Hyde Park, and in Northern Ireland, Wales and Scotland, as well as at other venues in England. I used to sing Jerusalem at school; it was the only hymn we always sang loud enough for our tetchy Headmaster. Listening to Jerusalem the other night brought back the springtime of my life, when grass was green and tides were high. Now, summer is falling behind and autumn is upon me. My mother died in the autumn, 28 September 1992, when she was in the autumn of her life, aged 65. I tried to sing along with Jerusalem the other night, startling Cailean. It comes with too many memories now, which well up as tears. I wonder if William Blake ever wrote of England’s bleak and wintry land. 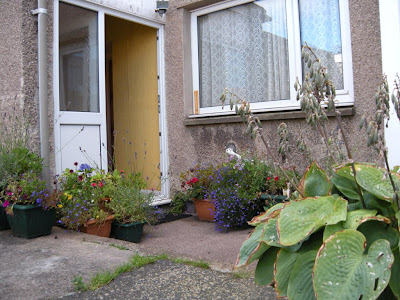 As I sit here, minutes from midday, the sky has clouded over completely. The wind seems wilder than ever, I can hear it booming in the rooftops, my chimney and fireplace played like an enormous musical instrument. There are the first bullets of rain on my windows.

The few flowers left by my kitchen door tend to be blue: lavender and hydrangeas and small blossoms that froth from my plant pots. Bees are fond of blue flowers, so there are still some of those around. Where do the honey bees go in the winter? Where will the people play?

If you stay in your seat once you've rung the bell in Ashington the drivers just keeps going ... to the next stop. They wont let you off as soon as you alert them and they invariably say they didnt hear the bell. There are a lot of drivers in Ashington who are a bit hard of hearing, bless em.

My heart races when when the wind gets up as it has done this week, I worry for my roof you know, and it doesnt settle back until the wind drops. I lie at night thinking 'this is the one, this is the gust that's going to take the roof off'. It never has. I wish there were more things nowadays that made my heart race.