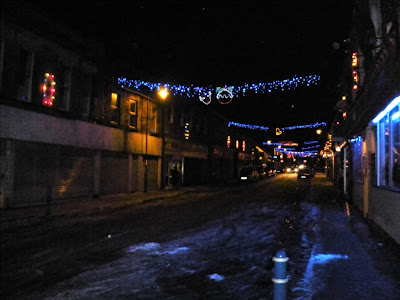 
A YEAR AGO I MADE FUN of the public Christmas decorations in the village, in particular the lights on our main street which were outshone by the sign at Euro-Pizza; the parade to mark the holiday season also seemed unusual to me with its escort of heavy motorcycles and Alice in Wonderland theme.

It was too cold and chucking rain on the night of this year’s parade and I stayed inside. Our community newspaper reports that a good crowd turned out to watch a Cinderella-themed trek down Queen Street, again with the motorcycles, and drummers. Santa Claus (as we now must refer to Father Christmas) was in Amble’s new ice-cream parlour at the far end of Queen Street, an encouragement to the children to ignore the ghastly weather, struggle down to Spurreli’s, and place their gift orders with the Bearded One. Ho! Ho! Ho!

We are having a brutal winter up here in God’s Country again this year, and it has been looking a lot like Christmas for over a month. Not exactly like Christmas in the mountains above Salt Lake City (I’ve been there, done that, several times) where vast quantities of snow, dense fog and mind-numbing temperatures are handled fairly easily. Here in our frozen north, everything tends to grind to a halt as the first flurries begin. I think that Northumberland could do with some free enterprise when it comes to ploughing the snow from the side roads (it’s all narrow country lanes up here) and car parks. In Salt Lake City, people with trucks and tractors would attach ploughing devices and head off to make a few dollars. I went with a friend to clear some parking areas at Mormon chapels in SLC, and experienced the worst motion sickness I’ve had before or since; but there are people who enjoy that sensation (the same people who enjoy Disneyland’s rides, I think).

There’s a tree, barren of leaves, but well-lit by silvery fairy lights just outside my front door and twenty-five yards over to the right. It’s rather attractive, and I do not know if it is a public display or provided by the householder next to the tree, but it greets everyone coming into Amble from the north, from Warkworth. There’s a bench below the tree and I suppose a hardy soul could sit there and enjoy the glitter overhead. Well, there’s a foot of snow on the bench, so a very hardy soul with thick trousers.

The overhead lights on Queen Street are new this year, and are purple. Small, purple and plentiful. I have been walking Cailean after dark (which is not that late in the afternoon just now, think three o’clock) to the Town Square at the bottom of the street, with the world somehow transformed by the bluish colours above. Other lights are attached to the first floor outside walls on Queen Street, in most cases above shop-fronts. Several of our shops have lovely displays in their windows which can still be seen at about 3.30pm as the businesses are open. Shutters tend to come down at five and the village world is less beautiful.

Our pavements are not always clear of ice, and the snow on the road gradually gets filthy and shifted up onto the pavement’s edges, narrowing any pathways. One must walk most carefully. I plod along hardly lifting my feet. Cailean, in his dark blue or tartan overcoat pads along quickly on short dachshund legs. By the time we get home he’s shivering and his underside is very grubby. I’m cold as well, no matter how many layers I’ve dressed in, and even my sturdy shoes are soggy and need to go by the fire. For all that, we are enjoying our walks in the purple world.

When I went to get my fibre-optic Christmas tree out of the cupboard in the back porch a week ago I found it below no end of boxes, bags and bits of furniture. That cupboard is a catch-all. So I decided to empty the cupboard, remove the tree in its box, and then restack things neatly. And I did all that, in a little over an hour. There’s no heating in the back porch and it was not exactly pleasant work. My cupboard is now as tidy as one could get, the tree in its box is still in there, on top of everything; I was so tired that I couldn’t be arsed to take it out and assemble it. I’ve settled with arranging my greeting cards around the fireplace in the front room. Perfectly happy with that, I am.

There is a tall brass standing lamp with a very large pink shade in my front room. It looks like something I imagine a Victorian whorehouse might feature. This is conjecture; I’ve not been in a Victorian whorehouse. But one sees films. With the lamp lit the room glows pink. The electric fire is disguised as a coal oven, and that gleams nicely. With the greeting cards along the hearth, on the mantelpiece and around a large mirror, the room is very seasonal. If my curtains are open, there’s usually snow flying around outside and icicles hanging about. Yes, it works rather well.

I have put up some lights. This meant that I had to stand on the one chair with a flat, fairly hard seat; not something I like doing as I do not enjoy heights, ladders, wobbling and reaching. Two days ago my overhead light fixture in the bathroom suddenly made a popping noise, and one of its three bulbs went dark. A few hours later a second bulb blew. Now my bathroom is in the centre of the flat, and there is no window to the outside. There are no electrical outlets; one could not even take in a small lamp in an emergency. It is always like midnight in there! In the past I’ve only been able to get the particular bulbs from a shop up in Alnwick, so I was wondering how I’d manage that in the ice and snow. However, I was plodding past a little shop in Amble that sells electrical goods (radios, hair-dryers, clocks and TVs) and thought to go in. The shopkeeper now has light bulbs and (Hallelujah!) had the very kind I needed. A secular prayer answered?

I headed home with my bulbs (I bought extras, the darn things seem to burn out every six months) and got out my chair. A few unsteady minutes later my lights were up and the bathroom was well-lit once more. No peeing or shaving in the dark!

Yesterday the electricity went off all over the village. The snow was falling heavily and the roads had not been ploughed or gritted, and few cars had even tried to navigate them. Coast Guard, fire and hospital ambulance vehicles crawled past the flat, a helicopter was overhead somewhere, sirens going off. Despite the falling snow and cold, suddenly the street outside was heaving with people on foot heading down the hill after the emergency crews. Hours later the lights came on again, but I have not been able to discover what the brouhaha was all about.

For some, this is a most holy season. I grew up singing carols and Christmas hymns at grammar school and in church. We usually had a tree in the living room, and we had dodgy lights on it; if one burned out, they all switched off. Which was the bad bulb? An hour to try every last one.

Christmas Eve was reserved for a family meal. The turkey tended to be dry and for some reason we had nasty tinned Danish hams. A sherry trifle (without the sherry) was usually served for dessert. When I was in my mid- to late-teens I used to attend a candle-lit service at St Paul’s (Church of England) with friends at midnight on Christmas Eve, usually fortified with eggnog. Gifts were opened early on Christmas Day. We always had a tin of Quality Street chocolates. Christmas Day meant The Queen's Speech on the telly. Boxing Day meant more visiting with family.

I hardly think of Christmas in a Christian context now. I’m not really alone in that. I’m fairly sure not one of my greeting cards has featured a Nativity scene this year. I have had several dogs wearing Santa hats, which Cailean appreciates.

I think there’s no Christian church or sect that holds strictly to the belief that 25 December is the actual day on which its Jesus was born. The Mormons, I think, say it’s on their magical 6 April. If one believes the Bible (and I cannot say I do now) the indications are that Jesus was born in the spring.

It would be nice to mark the season as a time of peace. The birth of the Prince of Peace if you wish; though the Bible has him saying (prophetically, accurately) that he was not bringing peace, but a sword. Looking at today’s headlines, we seem further from peace than ever. The bright lights might well be explosions in the East.

The bay-trees in our country are all wither'd
And meteors fright the fixed stars of heaven;
The pale-faced moon looks bloody on the earth
And lean-look’d prophets whisper fearful change;
Rich men look sad and ruffians dance and leap,
The one in fear to lose what they enjoy,
The other to enjoy by rage and war:
These signs forerun the death or fall of kings.

Shakespeare seems to have sad tidings, little comfort and joy. Despite that, the words he uses are exquisite. Little purple lights above a cold, dark street.

What to do? Back to André Gide:

Believe those who are seeking the truth. Doubt those who find it.
Posted by Ross Eldridge at 13:36