Vanished. She was that Small. 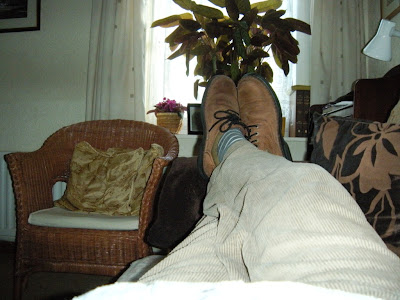 
MOST NIGHTS I TAKE CAILEAN FOR A WALK some time after ten o’clock. In the summer months, this would be in daylight, even as late as half-eleven. However, for most of the year, it is well dark and we rely on the city lights illuminating our main street to mark the way out and the way back. The glitter of the sign above the door at Euro-Pizza, the creamy glow through the fogged window at Taste of China, the twinkle of the cigarettes youngsters are smoking on the bench outside the Post Office may not be visible at the International Space Station (indeed, I don’t suppose the folks up there can even spot Amble by the Sea in the daylight), but for the dog-walker they are signs of light and thus life.

I remember Marianne Faithfull being interviewed back in the 1960s, might it have been on the Simon Dee Show. The singer was not talking about her song - she may not have managed one that month - but about light and thus life. In her somewhat growly voice, Marianne told us that a spaceship from some distant world on a reconnaissance mission in our galaxy would have been disappointed until they slipped into the skies above the side of the Earth celebrating night. There, in the dark, would be sudden pockets of extraordinary brilliance. Where millions gathered in cities, the street and vehicle lights and the lights from windows in blocks and homes, would tell our visitors in no uncertain terms that we are at home here, their journey was worth it. I dare say the aliens overhead might wonder if we were glowing creatures, rather than the dark lumps we actually are. Might we gravitate to the dark with our inborn light, rather than light the way artificially as we fumble about without it?

It is curious how one recalls a brief interview conducted 45 years ago on the same day one pops across to the corner shop to buy milk and bread, but comes away without the bread because one forgets what it was one needed (and no list was made).

Last night, at about eleven o’clock, I walked Cailean as far as the Post Office on Queen Street, and turned back when I reached the three under-dressed young schoolgirls who seem to be there every night, smoking and yelling obscenities at passing cars and into mobile telephones. I crossed the street and walked up the pavement on the other side and at the top I was slowed down by scaffolding around the building next to The Waterloo public house. Outside the pub were a half-dozen or more youngish people, males and females, smoking, some drinking, and all in loud conversation.

Over the past few years, my dodgy hearing has worsened and I have a hearing aid in one ear (I am waiting for a device for the other ear). I struggle to make out ordinary talking, radios and background sounds. I can hear loud birds (the feathered variety and the lasses) quite well, something about the pitch, perhaps. People yelling on a dimly lit street do register with me.

And so, outside The Waterloo, I heard:

“She was really small. Not a dwarf, like ... But really, really small.”
“I recall her too. Lost track of her.”
“Remember what people used to call her at school?”
“Oh, yes. Bridgette the Midget.”
“Even though she wasn’t a midget.”
“And her name wasn’t Bridgette.”
“She was that small. Well under five feet. Maybe four.”
“Don’t know where she went after school.”
"Vanished."

That I remembered this afternoon, though I forgot the bread. 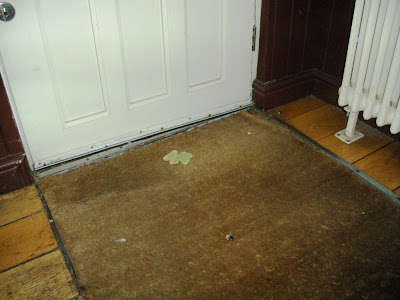 A Rustle at the door: Autumn had Arrived.

It is very much autumn. Cold, windy. The multi-coloured leaves were promising after some unusually sunny and warm weather a fortnight ago. The wind seems to be sufficient to wrest the leaves from the trees, and to blow a good many of them into the North Sea.

We may well have snow a month from now, if the past few years have marked a pattern. In any case, we are wearing nearly the full complement of winter clothes, though I have not worn my hat and gloves yet. God knows, walking Cailean late last night I wondered why I’d not reached for a hat when I left home.

Last winter our pavements and all but the main street were blocked by snow for weeks at a time. My courtyard was under ice. This year I have a snow shovel, and hope to make pathways.

Last winter, and the months through to early summer, my mood was buoyant. My Manic-Depressive Illness has, more or less, highs (mania and hypomania) and lows (depression) lasting around nine months each. When I am up, I feel brilliant, I am something of a superman, a rising star. I cannot sleep more than an hour or two a night. I read several books at once, an hour of this one, an hour of that one. I also walk a good deal, which is healthy. My medications tend to get me to a level point between high and low, but it is not easily done and requires monitoring. Nine months of flying near the sun and feeling untouchable ends, and I come to earth. I slow and cannot keep awake. My appetite goes. My enthusiasm dims.

Winston Churchill famously suffered from Manic-Depressive Illness, and he referred to his depressed periods as “the black dog”. I have a black dog, but Cailean tends to guide me through the light and the dark, aware of my wobbling, and he loves me as much when I stretch towards the sun claiming it for myself as when I go to bed at noon and pull the covers up because the light hurts.

I have been south of the centre for about four months. I am heavily medicated, more than I have ever been when low. I am sleeping too much. I am reading one book, and slowly. I am watching less television. I stopped writing entries for my Barking Mad Blog a few months ago.

Today, despite the wintry feel without and within, the cold and the dark, and struggling to eat regularly (I sometimes forget to eat for a day), I had a short group of words come to my mind. Not “buy bread” which might have been helpful this morning. Rather:

I have been watching Carl Sagan’s wonderful television series from about 30 years ago—Cosmos—and know that Sagan, before his death, seemed to stop believing in higher powers, gods, divine creation. As I have watched his lectures on the telly, I have found myself returning to a belief in something. Christians and other religionists might not think much of the belief that flickers within me somewhere (nothing as bright as the light on the sign at Euro-Pizza). I find myself somehow content to think that something may have set our universe in motion (and that is that, no further interference, the laws of physics were set at the beginning). There are some scientists that think we may dwell in one bubble in a vast bowl of bubbles, each bubble a universe. Who is disturbing the soapy liquid, blowing the bubbles?

This flicker of belief, sadly, has given me little in the way of hope. Hope is a religious principle, and it seems to be the promise in a rather unpleasant life. I am not feeling any hope that I will see my dead loved ones some day. I feel the light, I feel the dark, the highs and lows, and they are real, but there are no visions. One day, it seems to me, I shall look this way and that, then walk into the unknown. Perhaps I shall see well-lit cities as I go forward, and shall know there is life, light in the darkest night. Will I dare to land?

It’s good that you still go out, even if it’s not very far. It’s good that you still remember that there is light and there are highs (although I would imagine ‘middles’ are more sought after in your world). When it’s dark and you’re in that pit it’s too easy to forget that there are times when you don’t feel that despair. Keep walking. Literally. Keep walking until you see/feel the way that will take you slowly back to a place where you can feel pleasure as well as pain. And always, always remember there are people who care.