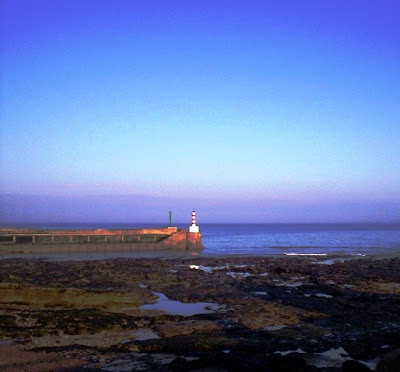 “But one of the soldiers with a spear pierced his side, and forthwith came there out blood and water.”
St John 19:34

THE WIND IS BOOMING TODAY. Here in my kitchen, the sounds made by the changes in pressure on the chimneys on top of the building are no less than those of a relentless hurricane passing over the Bermuda Islands at the end of summer. In my life, I have experienced a number of those.

I have just walked to the corner shop, about a hundred yards away. Getting there, with the wind at my back, I had to struggle so as not to be pushed forward on my face. Coming back, with my carton of milk and bottle of apple squash, I tried to get as close as possible to the walls on my right, pausing several times in doorways, then pushing ahead again, gasping for breath.

I have a memory of my grandfather, Henry Charles Christopher Eldridge, stored away in September of 1961. Charlie Eldridge was born on 26 July 1894, which happens to be the same day that the English novelist Aldous Huxley was born. In 1961, my grandfather and Huxley would have been about 67. My grandfather died in 1962, and Huxley in 1963 (on the same day that JFK was assassinated, so that Huxley’s passing went pretty much unnoticed in the media). Cancer. They both died of cancer.

The two novels I have read most often in my life, and love the most, are Aldous Huxley's "Island" and D.H. Lawrence's "Women in Love". Huxley and his wife were at Lawrence's bedside when he died of consumption back in 1930.

My memory of Charlie Eldridge, recorded in late summer of 1961, is of a tall man bent over by poor health. Charlie could not, and did not, walk too far. Not without sitting here and there to catch his breath. He had advanced lung cancer. So, we are in London walking along a street that seems to feature many antique shops. My grandmother and I had to keep stopping to allow my grandfather to catch up with us. It seems remarkable to me that he would have gone up to London with us, which would have involved an hour on a train and then buses. I am glad he did, because I have had the memory of it for 50 years now.

About the time my grandfather died, I began writing letters to family members who happened to be across the country or across an ocean sometimes. I corresponded with family at first, but as the 1960s rolled on, and I left school, I tended to keep in touch with friends. I suppose many of my elderly relatives were dead or dying by the 1970s.

I have always enjoyed writing. It has been almost a compulsion at times, making things real. I came to write a newspaper column for a few years, and then, in about 2008, I began blogging. My blog was “Barking Mad in Amble by the Sea”. I use the past tense, because I expect this will be the last entry there.

I am done with writing.

A fortnight or so ago, I received the sort of Christmas present one really does not want. The diagnosis of cancer. I have skin cancer, which started in my right side, then moved into the lymphatic system, both lungs and other tissues. Funny, I celebrated 30 years since I last smoked a cigarette last August, and the disease is in my lungs, of all places.

What can I say? If you smoke, then quit. If you are young and are tempted to smoke, it is possibly the worst thing you could do with your life to smoke.

I have that memory of Charlie Eldridge, walking slowly along a pavement in Chelsea. It was a sunny day, not windy, unlike today, 50 years on.

Yes. All the words have gone out of me.
Posted by Ross Eldridge at 15:56

I'm so sorry to hear your news. I am sorry the words are all gone. I hope the fight is not. I hope you will see many more christmases in Amble. Wishing you love and strength x

My best thoughts are with you…

I didn't get a Christmas card from you so I had to come looking for you.

Very surprised to see this blog.

Please drop me a line, I'd like to communicate with you.

Hey, that's what long, long term friends are for.

will miss your writings, stories and humour Ross xx

I read about Prince Harry dancing,making polite chatter, and tasting rum as he toured Belize, the Bahamas and Jamaica. And I thought I should check in on Ross, who used to write about his past life in Southern climes. And I was very startled to come upon this last blog ... but I hope it's not the last words you'll write. So many of us have enjoyed your discourse and observations and ruminations. I've even gone to your street on virtual visits and peered around for your home.

And I've laughed at your stories - like the visit to the temple with the beautiful white cows.

I've never met you in person, but I think of Ross Eldridge as a friend, and I hope my friend will receive good medical care. Kathy in California

Ross, my friend. I am so sorry to hear this news and hope you get care at the excellent medical facilities in England. I will miss your words, Sir, your sardonic humor, and deep insight.

I send you and young Cailean a nose bump of comraderie of writers and dog lovers. Namaste.

Ross, Not great news to find here--an understatement, for sure.

I wish for you comfort, peace, the knowledge that you're loved...

I am new to this site but as a Bermudian and Warwick Academy alumna I have been intrigued and entertained by Ross Eldridge's writings. After his last post, I was curious about his current condition. Unfortunately, it is with sadness that I post the following notice from The Journal, Amble, Northumberland (UK).

7erASeven months later and I still can't believe he's dead. Ross used to say he would die at 32 and for many years we joked that he was wrong about THAT!
He was the best friend I have ever had. I miss him daily.

love you, my bolphie. i hated to take down last year's calendar, your last gift to me. but your blog is still here, so i can still revisit, from time to time, your beautiful writing. i'll always miss you.
khairete
suz

I just found this blog and was saddened to read of Ross's death. I justed returned from Bermuda a week ago exploring my fathers birth place. I noted that Ross's father and his grandfather both worked in some capacity at the NAAFI Canteen around 1940. My grandfather (Charles Henry Hick) worked in the same canteen during this same time. I was hoping that I would be able to contact Ross and see if our relatives were known to each other and if there was any documentation or pictures from that time. If anyone has a contact informaton for any of Ross's children or siblings it would be greatly appreciated.
Thanks
Kevin Hick, Halifax, Nova Scotia, Canada.
Kevin.Hick@nshealth.ca or hickkc@gmail.com

Ross, I miss you every Christmas season. I am so thankful you let me publish a bit of your work at CPR. Now Gary is gone, too. It was good to know you both. It benefited me greatly in many ways.

Just wanted to stop by and tell you again. I hope what you put here stays up always...