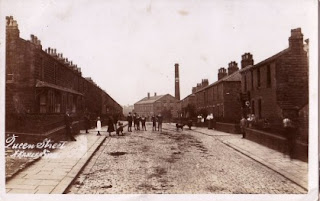 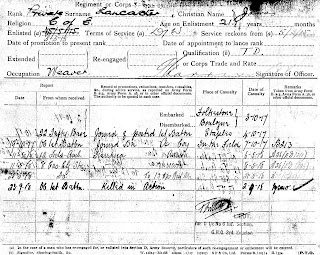 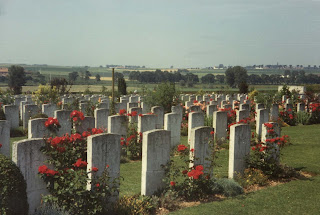 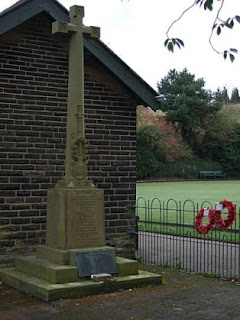 
A certain scribe came, and said unto him, Master, I will follow thee whithersoever thou goest. And Jesus saith unto him, The foxes have holes, and the birds of the air have nests; but the Son of man hath not where to lay his head.
And another of his disciples said unto him, Lord, suffer me first to go and bury my father.
But Jesus said unto him, Follow me; and let the dead bury their dead.
St. Matthew, 8:19-22

My little dugout, my home these last two or three days: I am in a narrow trench about four feet deep, and my dugout is a hole scooped out of the trench side and roofed over with a piece of corrugated iron. When, at night, we settle to rest, and hang up oilsheets at the openings, and light our candle, we are quite comfortable, and happy.
Lance-Corporal Frank Earley, 1 September, 1918. (He was killed the next day, aged 19.)

I DID NOT KNOW of Lance-Corporal Frank Earley and his death in battle on the Western Front on 2 September, 1918 until I read the Imperial War Museum publication "1918 - Year of Victory" penned by Malcolm Brown. I was looking for information on my grandfather's older brother, James Arthur Lancaster, who was killed on 2 September, 1918, fighting alongside the Canadians as they smashed through the "Drocourt-Quéant Switch" offshoot of the Hindenburg Line.

There are only five sentences in the book about the battle for the Drocourt-Quéant Switch, and four of those are reflections on the use of names with Wagnerian connotations by the Germans for the lines in that area. They called the Switch "Wotan". I do not know how many hours the battle lasted, or exactly how many men died and what exactly killed them, or how much firepower was expended during the battle on either side. What was the ground like? Were there any trees left near Arras by 1918? Was it raining? Had the Tommies had time for breakfast? Were prayers held? Did anyone sing "God Save the King" (or even think it)? Did anyone try and run away? Did my mother's uncle die immediately, and was his body quickly removed to a morgue? Was he bagged or boxed? Was he missed?

I've never seen a photograph of James Arthur Lancaster as an adult. He was only 24 when he died fighting for his country, and, as he'd volunteered in 1915, I imagine he did care about his country. He'd been 21 when he signed on, and would have started working in the Queen Street Mill in Harle Syke, Lancashire, ten years before. Of course, that would only have been part-time when he was eleven years of age, he might have had another year with some schooling before becoming a full-time weaver. Perhaps, after ten years in the Mill, the King's Own Royal Lancaster Regiment, and the likelihood of some foreign travel, even under fire, appealed to the young man.

I have seen a photograph taken, I'd guess, in about 1905, picturing James Arthur Lancaster, then aged eleven, his sister Maud, who would have been about nine, and my grandfather, William Lancaster, four or five. The boys looked much alike, their hair cut to a stubble, dressed in identical outfits that may have been borrowed or hired for the occasion, as I doubt that the Lancaster children had much need for fine-cut, black, velvet suits with white, lacy shirts with enormously wide and high collars that seem purely decorative. Not even as useful as linen antimacassars, and the family would not have had those either. The boys looked a bit flash, to be honest. Maud had been dressed as I'd have expected a girl to have looked in her circumstances: plain. However, plain did mean many layers of unattractive cloth, set off by drooping ringlets. That sort of plain takes some work.

James Arthur was sent to France in October of 1917. I don't suppose anyone in the family had crossed the English Channel in living memory. My father's people, the Eldridges, were sailors in the Royal Navy going back many generations, but my mother's relatives had been farmers and weavers and I have no record of even a distant cousin of some sort putting on a uniform. And we didn't have the money for holidays on the Continent.

I have a number of James Arthur's military records now. It is interesting to see his rather poor penmanship, as if he struggled when signing his name to his Attestation documents when pledging allegiance to His Majesty, King George V. King George V had the family name Saxe-Coburg Gotha, he was the first cousin of Kaiser Wilhelm II of the Hohenzollern family. Lancaster was the name of an English Royal House, long before those Germans got involved.

One of the last of the papers that have come my way is shown above, and one can see James Arthur was "In the Field", which might have been fairly accurate. Or in a foxhole in the field. He was taken to a rest station a few times suffering from diarrhoea, and I imagine it must have been more severe than that one gets after a dodgy curry on a Friday night.

And, on 23 September, 1918, someone has made a memo on the records to show that the soldier was "Killed in Action". The memo was entered three weeks after James Arthur Lancaster died, and then the page seems to have been stamped and signed.

My great-grandparents, Harry and Elizabeth Lancaster, received word of their oldest son's death at their home in Harle Syke. Who answered the door? I wonder. It was just a few weeks before the War ended, my grandfather, turning 18, had been called up (fortunately, he contracted the influenza virus and was not caught up in the madness, he got to stay in the Queen Street Mill).

Another document, dated 4 May, 1919, has my great-grandfather signing for two medals awarded to his dead son. The War and Victory Medals. I have no idea where they might have gone.

The exact whereabouts of James Arthur Lancaster's grave was not known in my immediate family until five years ago when, through the Commonwealth War Graves Commission, I located him in the Wancourt British Cemetery in Northern France, not far from where he died. His grave reference is VIII H. 10. His name is on two memorials in Harle Syke, Lancashire, and I've shown the one by the town's bowling green. I wonder if he bowled.

The Queen Street Mill in Harle Syke is now a tourist attraction, a museum, boasting the only remaining steam-powered looms in the world. It has free parking, a gift shop and a café.

11 November, 2008, was commemorated as the 90th Anniversary of the Armistice that ended the War to End All Wars. Two Royal Marines were killed in Afghanistan today, squabbling with dusty people over some real estate that they want for their own people and we wouldn't know what to do with if we could take it from them successfully. So it goes.
Posted by Ross Eldridge at 16:11

Okay, Ross. I see how to get an RSS feed for the comments, but how can I get one for your blog itself?

I can't figure it out, but of course I don't have my decoder ring on...

Hi Barry, I think, on your blog, you need to just type in my blog address on some form for your "Blog List". My blog address is http://barkingmadinamblebythesea.blogspot.com/
Then, in theory, my blog should pop up on your page list.
Of course, the Large Hadron Collider ain't working right, so I can't be sure.
Cheers!
Ross

you are so interesting, my dear rolph.
i wonder if your interest in your ancestor prompts his shade to take an interest in you, to hover about and maybe even give you a prod from time to time?
i like to think so. but i'm so thick-skinned (or uninteresting to my own ancestors, whom i've never investigated as you're doing) that i just don't feel a dang thing.
khairete
suz