The Lie-In in Winter 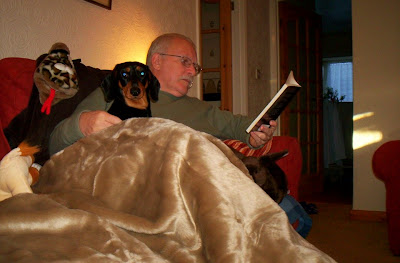 "Going to the Feelies this evening, Henry?" enquired the Assistant Predestinator. "I hear the new one at the Alhambra is first-rate. There's a love scene on a bearskin rug; they say it's marvellous. Every hair of the bear reproduced. The most amazing tactual effects."
Aldous Huxley (Brave New World)
AS A SCHOOLBOY I enjoyed an unplanned day of reading and daydreaming when the weather kept me from playing cricket or football with my mates. As if. All those years ago, I don't think I ever had a regular date, or any date at all, to play an organized sport outside of school hours. I would have been out fishing, possibly walking with a friend on the beaches of Bermuda, at the movies or at the Library. And, come the rain, wind and cold, I would not have hesitated to reach for a book, a blanket if necessary, a spaniel, and would have settled on my mother's sofa. I certainly wouldn't have complained at any misfortune. Let the storm rage, I will not.

Books from the Junior Library at first, Enid Blyton's stories (the butch ones, I wasn't into her Naughtiest Schoolgirl tales, which I regret now), the Hardy Boys, Mark Twain, CS Lewis, HG Wells (especially The Time Machine), Jules Verne, and anything described as like those on its cover. I recall the day I presented myself at the Senior Library, almost certainly the first moment I was able to do so. Would I have been twelve or thirteen, perhaps? That is when I started reading histories and biographies (I'm still at it).

Unable to afford new books, I'd go to the second-hand shops when I was hardly able to reach the shelves. So, on to the James Bond novels: I was a spy on rainy days. I bought many of the best-sellers of the 1950s that had become tattered, well-used, second-hand goods in the 1960s. I enjoyed Nevil Shute, Nicholas Monsarrat, Daphne du Maurier, and Robert Ruark's, stories. Of course, I read Irving Wallace, Irving Stone, and James Mitchener. Harold Robbins was a guilty pleasure. Music magazines were de rigueur. The usual teenaged-boy things. Not sure what sort of a buzz I got out of them.

After that, as one does, I moved on to Mann, Hesse, Gide, Orwell, Huxley, Woolf, DH Lawrence, TE Lawrence, William Blake, Yukio Mishima, Joyce, Wilde, Bernard Shaw. Mormonism brought a flood of books by and about noted members of the Latter-day Saints.

I am blessed in having had friends who pass books along to me, and who generally know exactly what I'd appreciate. From about 1975, I could hardly claim to have kept the publishing industry in the black and white. Nearly every book I read had been handed around a group. I still use the public libraries.

These days and nights, I am drawn to non-fiction first, and the classics. I am reading plays. And I have looked for novels set in the part of England where I live, and/or written by local authors. I still enjoy a good biography.

If I have only a few minutes, perhaps waiting for my car or a bus to arrive, I often spend that time reading lines from something poetic, without being poetry. At this moment, I have Virginia Woolf's The Waves, and André Gide's Fruits of the Earth at hand. I pick up Shakespeare several times a week.

In the past few months I have read several histories on the First World War. I have been reading Alan Bennett's autobiographies (Untold Stories and Writing Home); an autobiography by William Woodruff (Nab End and Beyond) about growing up in a Lancashire mill town in the 1920s; a book about the correspondence between Hitler and Stalin by Laurence Rees (Behind Closed Doors); a biography of the painter Francis Bacon (The Gilded Gutter Life) by Daniel Farson; and Simon Doonan's fabulous account of growing up in Reading in the 1950s and 1960s (Beautiful People). This last book, like the BBC-2 TV series based on it (also called Beautiful People, but reset in the 1990s), has had me doubled up laughing.

The book I'm holding in the photograph is the stage play The History Boys by Alan Bennett, which is brilliant. Bennett adapted it for the film, and that's terrific too, I've watched it many times as it's a great way to spend ninety minutes enjoying fine language and thoughts. I was something of a history boy myself.

I celebrated another birthday recently, and, using some money my sister sent me, I bought something which is, I suppose, a bit naff. A faux-fur mink blanket. It's 79" square, and warm as can be. It feels lovely. Cailean is not sure whether it is friend or foe, and growls at it from time to time, then burrows under it (the underside has a faux-suede finish) for several hours. Friend. That's the blanket in the picture. I look pretty damn good for 82, don't I? That's because I'm not nearly 82, which would be my mother's age.

It has been a chilly, rainy day. Not fit outside for man or beast, as WC Fields put it, and perfect for lounging about under the faux-mink. We posed for the photograph, time delay, but had been reading through the morning, and continued to do so all afternoon. Cailean popped up for the flash. He did not bark: I was worried about him disturbing the neighbours when I got him, so I trained him to bark in Braille. If he needs to alert me to something at the door, he stands by it and paws the floor almost silently.

We had the fairy elephants upstairs clunking around, but they were not brawling at least. For a half-hour, one of them hoovered their floors with its trunk, and they have a good deal of dust and debris to vacuum up and/or the elephant has sinusitis. I put my reading down and tried to come up with an appropriate name for two elephants in Northumberland. Elephants? Grey … Northumberland? Earl Grey. So, I've got Earl and Countess Grey thundering about overhead.

I read a bit, then wondered about this really odd and vivid dream I'd had last night. I had dreamt that I'd built a time machine (it looked rather like one of those steam-boxes for sweating off one's excess fat) and it was all set to go (from my mother's back garden) except for the fuel. The casing, the circuits, the science … those were hot to trot … but the tank needed topping up. What did the time machine in my dream run on? This is the strange bit: gossamer. I asked my mechanic where we might get some. "Fairies' wings," he replied. There might be a short story in that. How the fairies have to learn to be like normal people. The Sarah Palin Manifesto, 2012.

Now, back to The History Boys and the touch of faux-mink.

That's the way it is just north of Narnia tonight.
Posted by Ross Eldridge at 19:29

Cailean is handsome as ever. Get's it from his dad.

Who took the picture?

I haven't forgotten you. Just been beyond busy . . . which I was told could happen in retirement. Then mother issues, and son issues . . . and you've managed five posts I've missed.