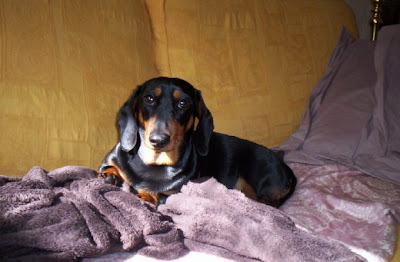 I DIDN'T TAKE MANY SICK-DAYS when I was at school. Truth be told, I preferred to be in class rather than at home. I was the child that tired of summer holidays first.

Of course, in my time we were allowed to catch measles, chicken pox and mumps, and I had the first two of those and had to stay at home for a week or ten days with the spots and blotches and fevers. And most of my schoolmates would be undergoing the same ordeal at about the same time, and it was no big deal. A pile of books to read and the radio (we had no daytime television) would keep me entertained.

My first really lengthy and serious illness turned up just before Christmas 1967. I was living with my aunt in the Medway Towns and became ill instantly. I'd been walking around London with a friend who'd just arrived to study nursing at University College Hospital and we'd had lunch and were heading towards Carnaby Street (it was the winter following the Summer of Love) and I suddenly felt feverish, confused, flushed. We turned around and headed back for the hotel near Marble Arch where my friend's mother was staying. She'd been a nurse herself and suggested I get myself home, something was coming on.

I took the Tube back to Victoria, and the train to Gillingham, and went to bed. I coughed and gasped and wheezed for four weeks, hardly able to get upright. Some Christmas! I only remember watching The Beatles' Magical Mystery Tour fiasco of a film on the telly on, I think, Boxing Day. I was delirious enough to like it then, but have not cared for it since (except for the tunes, of course).

A doctor came and prescribed penicillin and hours later I took a turn for the worse. The doctor returned a few days later and diagnosed German measles as I was bloated, reddened and having trouble breathing. What he failed to appreciate was my allergic reaction to penicillin. I am, it turns out, so allergic to that mould that if I consume a little of the crust on a Brie cheese my blood pressure soars and I get dizzy and flushed. I did have bronchial pneumonia. Bed rest. And I missed the first three weeks of the spring term at college.

I have had a similar illness, severe bronchitis, three more times: Christmas 1979 in Salt Lake City; spring 1993, in Hurricane, Utah (I first thought it was hay-fever as the desert in the south-west blossomed abundantly that year); and then in the winter of 2007-2008 here in Northumberland. I was confined to bed through sheer weakness during those illnesses, but did have television (especially in 1993 when I'd watch the telly all night long, admiring the items for sale on QVC at three in the morning when products would be offbeat).

In 1977 I had glandular fever and was feverishly out of my head for over a month. It was quite a trip. I did lose 35 lbs which, fortunately, I could afford to. I missed over four weeks at my job (I was working for a supermarket I think).

This winter I had 36 hours down time with a streaming cold. It started suddenly one morning and stopped late the next day just as abruptly and completely. My family doctor in Amble had the same thing, but his turned up on Christmas Day and Boxing Day. I have had a bit of hay fever this spring. I'm not exactly sure what is causing it. I am allergic to avocado pollen, but there aren't many of those trees around!

That's my medical story as far as brief illnesses are concerned.

Last Saturday afternoon I took Cailean for his daily jaunt, around the town rather than by the River that day, and when we got back he went in his bed for his usual post-exercise nap. When he got up later I noticed he was limping, favouring his left rear leg. I picked him up and when I examined his foot (thinking perhaps he'd got a thorn in it) he was obviously in considerable discomfort.

I telephone the veterinarian's surgery, which is just a few doors down from the flat, and was directed to the main surgery in Alnwick, 10 miles away. I phoned and the person there took my name and number and said the on-call veterinarian would be phoning me shortly. And a minute later Simon, who has seen Cailean before for innoculations and check-ups, called. I explained the symptoms.

We decided not to do anything right then, as the surgery in Alnwick was shut, but that I'd call back if Cailean's condition got any worse and Simon would open the Animal Hospital.

Happens that Cailean was comfortable so long as he wasn't moving about. I wrapped him in a blanket and we watched the telly from the sofa. Every hour or so I carried him outside and let him pee, which was a clumsy affair as he squats, being a dachshund, and is not used to three-legged widdling, I had to hold up the drooping left hip.

Sunday morning Cailean was still limping, but it wasn't any worse, and I decided to call for an appointment with the vet for Monday morning, first thing.

This morning we walked over to the Amble surgery and Simon was on duty. He asked me if I wanted to hold the sharp end of Cailean while he manipulated his leg and hip, or would I prefer his veterinary nurse do it. I trust Cailean and stroked his nose and Simon did his worst. A few squeaks.

Simon has given us some anti-inflammatory tablets and Cailean had taken the first one by half-past nine, and two hours later he was dashing around the flat.

We're not to do any long walks, it's to be bed rest. On Wednesday we are to have a follow-up examination and if things aren't improving Simon will set up x-rays and more invasive tests for Thursday.

Cailean is now under the desk in his bed, fast asleep. He ate his breakfast and seemed to enjoy it (liver, broccoli and dry food mixed). In a minute we are going to the sofa again, I've got a pile of books to choose from and I can stroke a dog's nose while reading history.

I'm missing the daily walk, but don't want to leave the boy alone too long.

THE BIGGER PICTURE: Simon weighed Cailean and he clocked in at 9.03 Kg, which is very nearly 20 lbs in old money. I knew Cailean was a bigger dog than my Aleks had been (Aleks topped out at 13 lbs, and was not as long or tall as Cailean). A bit overweight, we thought. So Cailean will have no liver and more kibbles and greens, and we'll both lay off the crisps.

Email ThisBlogThis!Share to TwitterShare to FacebookShare to Pinterest
Labels: Cailean

perhaps a lingering ghost from mom fussing over me in childhood illnesses persists, because something about being in bed for several days with telly and books still sounds so wonderful to me, even though my adult self knows that feeling sick enough to be bedridden really stinks.
i hope the anti-inflams continue to perk up young cailean. it's hard enough that he has to do without liver and crisps.
(liver........yeeeeuck!!!!)
:) khairete
suz

I remember having measles and mumps (or was it chicken pox?) simultaneously when I was in the third grade, or somewhere about that age.

I spent days in a dark room--the curtains drawn because the light hurt my eyes-- with my pet guinea pig to keep me company. It seems a very fevered and weird time in my memory.

Poor Cailean. To have to endure the rigors of a diet-- a DIET-- at such a young age. The antiinflammatories will help, but the weight off, as we both know, will do wonders for his back and hips.

Good Cailean's on a diet. My brother had two dachshunds and both were susceptible to hip and back problems because of their length.

The good news is that one lived to 14 and the other 18 without major difficulties except he had to install a staircase in their later years when they could no longer jump up on the bed.

The female was even bitten by a brown recluse but recovered except for a large bare spot on her side where the bite kept hair from growing back.

Anyway, Gute Besserung to your little dog. May he soon be back out walking the neighborhood with you.

Here's an update: As of this evening, Cailean took his first real "long walk" for 10 minutes to the Town Square (then a sit-down in the sun) and 10 minutes home. And he seems fine, though wanted to get on the sofa when we got back, and is now under his blanket. The Vet says he has to lose 2 Kg and we've signed up for the Doggy Weight Loss Class. (Good grief! I may write about THAT!) Fortunately, Cailean has never tried to jump on the furniture (I'm well-trained to lift him) and he doesn't often jump off the sofa, nearly always whines to be lifted down. But I'm thinking of getting some sort of low footstool that, by the sofa, would make a convenient step up. The Vet read the Riot Act to me about overweight dachsies though!

Of course, this means I must also diet, or snack on the sly alone in the village ...