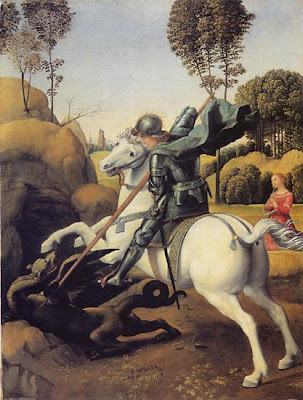 And you, good yeoman,
Whose limbs were made in England, show us here
The mettle of your pasture; let us swear
That you are worth your breeding; which I doubt not;
For there is none of you so mean and base,
That hath not noble lustre in your eyes.
I see you stand like greyhounds in the slips,
Straining upon the start. The game's afoot:
Follow your spirit, and upon this charge
Cry: 'God for Harry, England, and Saint George!'
William Shakespeare. Henry V Act III, Scene I

THIS COMING THURSDAY, 23 April 2009, some of us here on this royal throne of kings, this scepter'd isle, will be celebrating England's National Day, the Feast of Saint George, the one that slew the dragon.

Saint George may not have been English born (though some must say he was, by convenient legend, born in Coventry), but he is the patron saint of the English. You must not confuse the English with the British: the English are all British, but the British are not necessarily English (they might be Welsh, Scottish or Northern Irish … and not happy to be called English at all).

The English are not the only people who consider Saint George their patron saint. If Greeks, Russians and Ethiopians also raise a glass to George on his day, and Portuguese and Lithuanians join in, don't be shocked. I would be surprised, perhaps pleasantly, to see men at football matches with their torsos painted with the red cross on a white background, the flag of Saint George, cheering on teams that are decidedly not English. I don't expect that to happen: The banner is most English. 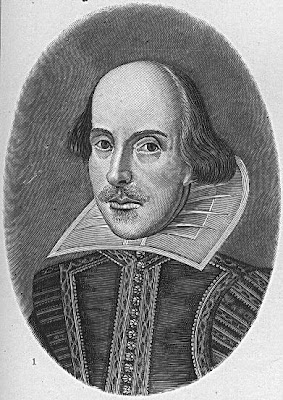 WILLIAM SHAKESPEARE may have been born on Saint George's Day, 23 April 1564; he was christened on 26 April of that year. He did die on Saint George's Day, 1616. And we've all heard how little we know about this, the greatest writer in the English language. Did Shakespeare even exist? In fact, according to a delightful and readable book by Bill Bryson ("Shakespeare: The World as a Stage") there are quite a few signs that one William Shakespeare was born in 1564, and died in 1616, and did some remarkable things in between time. Very few so-called famous people of Shakespeare's means, of that time in England, left so many clues, so much evidence, besides the plays and sonnets normally attributed to him.

I first visited Stratford-Upon-Avon and the Shakespeare sites there when I was a young boy, one of those all-day coach trips with my Nan Eldridge. I've been a few times since, but I remember, from that first visit fifty years ago, Anne Hathaway's Cottage, and the Royal Shakespeare Theatre seen from a distance. Not a few years later I read my first Shakespeare, "Henry V", in English classes. I failed my final exam, had to retake it six months later, which I did successfully, if only just. And I absolutely hated the whole Shakespeare business. What did Shakespeare have to do with the 1960s? The now?

Then, in 1968, I saw, several times, the Franco Zeffirelli film of "Romeo and Juliet", and loved what I was hearing and seeing. While Zeffirelli took some liberties with the dialogue, there was Shakespeare at the core. The film of that play starring Leonardo di Caprio decades later was less convincing, being set in latter-day "Verona Beach" somewhere in the USA, but one hopes it turned some young people on.

I've seen many films of Shakespeare's plays, and one built around his sonnets (Rupert Graves as the bisexual Bard in "A Waste of Shame"). I fell asleep in the Island Movie Theatre watching Olivier's "Othello", having just had a big dinner at the Royal Bermuda Yacht Club with drinks and a few pills. I enjoyed Richard Burton and Elizabeth Taylor's take on "The Taming of the Shrew". Sir Ian McKellen's "Richard III" set in the 1930s was excellent, though I prefer period dramas to stay in their period as a rule. I've suffered through a few Hamlets, a play I just cannot like yet (I'm waiting for the condensed "Piglet"). I've seen a curious version of "Richard II" featuring a woman in the title role: The language of that play is exquisite, but I kept fretting over the gender casting. I have seen "A Midsummer Night's Dream" staged … outdoors … And "Timon of Athens" staged in a Globe-replica theatre in Cedar City, Utah. Both very uncomfortable experiences from a physical point of view.

Of course, I've seen "Shakespeare in Love" which I enjoyed the first time, if not the second. I've read Wilde's "The Portrait of Mr. W.H." and saw the episode of "Doctor Who" set in the Globe Theatre back in the day.

One worries that in order to make Shakespeare "easy" the language will be "modernized", which is to say "destroyed" and "lost". Already the Authorized Version of the King James Bible, in my lifetime, has become a rarity. For some reason, everything has to be "dumbed down", as the odd expression goes. So many rap lyrics.

What might be my favourite lines from Shakespeare? The "This England" from Richard II, of course, and these few from Romeo and Juliet, Juliet's father speaking as he examines her body:
Ha! Let me see her: out, alas! She's cold:
Her blood is settled, and her joints are stiff;
Life and these lips have long been separated:
Death lies on her like an untimely frost
Upon the sweetest flower of all the field.
Dear God, but that's some writing! Did Shakespeare sweat over those for days, or just knock them out while trying to meet a deadline thinking 'This will have to do…', or wake in the night with that combination in his head?

Is it any wonder one recognises any representation of Shakespeare much as one knows Jesus Christ or Mickey Mouse when one sees them?

Raise a glass to William Shakespeare!
And dragon pie for all! And good on old England!
Posted by Ross Eldridge at 17:50

Email ThisBlogThis!Share to TwitterShare to FacebookShare to Pinterest
Labels: Shakespeare

oh bolphie, i just never know what delightful journey you're going to take me on next!
first off, don't you just love that teeny tiny dragon in this rendition of st george? heck, he could probably have thumb-wrestled it into submission.
i'm with you in decrying the modernization of the bard's glorious, rich, nuanced language. in fact, that's why i started doing homeschool classes on him, so that i could persuade a few kids, maybe just a few, to fall in love with the language and not want it 'translated.' i saw an othello that had been modernized and it fell so flat. i bawled voluptuously to di caprio's R&J just two nights ago, but it was a struggle to decide to watch that one or zeffirelli's, with olivia hussey's incredibly beautiful eyes and titties. i think i very slightly prefer her as J, and very slightly prefer leo as R, but not by much. i watched the modern version to scoff but stayed to praise, and when i taught it here i had to have 2 sessions so i could show the kids both. they too were divided on which one they preferred, but i'll be proud to my dying day that they ALL came back for the second session and watched both movies avidly.
did you see ian mckellen and dame judy in macbeth? it's weird but compelling, although for both that one and olivier's hamlet the kids deserted me in no time flat. they loved burton and taylor in shrew, the most recent midsummer night's dream, and the glorious rollicking branagh take on much ado about nothing. and as always, their insights and observations are so astute, i learn more from teaching them than they ever do from me.
i'm going to try and take down a notch this fall and teach shakespeare to the 9-12 year olds at frederick community college. but with teenagers i can share the filth (which is 90% of how i suck 'em in). how ever will i manage to keep it clean?
:) khairete
suz

The Branagh "MUCH ADO" was a good one ... I've not seen Ian and Judi in the Scottish tragedy, however. Must look out for that one. Oh, my, Olivia Hussey's titties ... they made the 60s for me! I remember her rolling over in bed and having quite a shock ... I was not quite used to such a sight at the Rosebank Theatre. I saw that R&J at the Odeon in Leicester Square ... a whole new world.

The painting is by Raphael, who clearly had little experience of dragons as WE know them ... CGIs of immense size gobbling people up like scotch eggs at a picnic.

Our most summery day going here ... I got out my lightweight clothes and will do time on the chaise lounge in the courtyard. That's tempting the weather gods, but perhaps this is the first real summer here since 2006. Make hay, etc.

Definitely stress the naughty in Shakespeare if it gets the kids into class. Our English master had us go to the Government Library to read the unedited Henry V. Our school texts had been expurgated for our benefit. Hah!