A Murder to Dream For 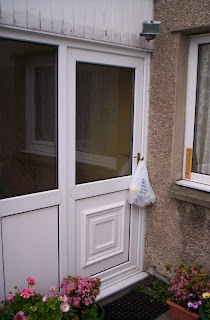 Will you meet me in the Mendips?
We'll walk, climb and abseil
And look for Bronze Age artefacts
Where the barrows never fail.

Mendips' Cheddar's gorgeous.
I'm not speaking of the cheeses
For every hole holds promises
And every furrow pleases.

Meet me in the Mendips,
Down by Weston-super-Mare,
No threat Frome, Shepton Mallet,
And a Bath awaits us there.

Please meet me in the Mendips
Land of silver and of lead;
We'll take Midsomer Norton
And turn it on its head.

Away now to the Mendips
They'll never find us out;
Hid in the Rock of Ages
When the coppers are about.

Meet me in the Mendips
I long for Cowslip Green
And the temperate hills of Butcombe
And places still unseen.

Please, please now to the Mendips
This plea is not a joke.
I'm wanted by the Amble police!
Yours sincerely, Rodney Stoke.

WHAT A CARRY-ON, what a goings-on, what a brouhaha! This is a Bank Holiday weekend and I intended sleeping in, taking Cailean for a short walk in the rain, or a long one in the sun, and then reading (The 19th Wife by David Ebershoff, a fine book set in Utah in places where I have lived, and often in buildings I am more than a little familiar with), and finally having chicken and rice for a late lunch while Cailean had some meat boiled off the latest bones that turned up in a bag hooked on our kitchen door's handle.

Just to explain Cailean's fare: Ever since I got the pup, bags of meat, usually on great chunks of bone, have turned up regularly in plastic bags (as I told the Police, the bags have nearly always been recycled - a good thing - from the corner market) at the back door. Perhaps three times out of several dozens, the meat has been uncooked, just slivers of flesh on the bone. A few times there has been only the meat, cooked, barbecued usually under the dome in the courtyard. I only tasted the meat, the cooked meat, once when I was concerned that it might be saturated with some sort of sauce that could play havoc with Cailean's digestion. The meat, which looked and tasted like pork, did not so much as have salt or pepper on it. It was plain, cooked meat.

Cailean is a friendly little dog and he delights in the neighbours, who all seem to like him. Even the postman sometimes brings a biscuit for Cailean if there is nothing for me in the red Royal Mail pushcart.

Recently, the veterinarian read me the Riot Act about plump dachshunds (while indicating Cailean!) and we are now observing a diet of mostly adult light dry dog food.

When the latest bag of flesh and bones turned up at the door two evenings ago (Rodney never knocks, he just leaves the bag for us to find, treasure at our leisure), I boiled the bones, for the meat had not been cooked. These bones were rather large and protruded even from my largest cooking pot, meaning I had to turn them over from time to time. The boiled meat went to Cailean; the bare bones went back in Rodney's already-recycled bag, and then that was tossed into my dustbin outside the courtyard. Looked like pork, though I've never figured out the bones on any of these treats. I took advanced level biology at school, but the only skeleton I ever really examined was that of a toad. We poisoned Bermuda toads (which were poisonous themselves) and then boiled them until their flesh fell off, then picked out the bones to reassemble. Whatever the meat that Rodney had been bringing over, it was not toad or frog.

A little about my neighbour then: I have lived in this flat, one of six carved out of a very old building, for three years. When I moved in, only one other flat was empty, and that remained vacant, next to mine on the ground floor, for six months. I was not aware of any movement or furniture in or out of the neighbouring flat, but on the next New Year's Eve, minutes after Midnight, there was a rapping at my kitchen door. This was before I got Cailean, and I answered the knock alone, half-asleep. Standing in the light, for my motion detector had illuminated the corner of the courtyard, was a man in his late middle years, grey stubbled hair, t-shirt and jeans and trainers, tattoos on his muscular arms. The stranger was holding a bottle of Scotch whisky.

In a very Scottish accent, the unexpected visitor, who was not even shivering in the cold, asked if I'd like to welcome the New Year in with him. I don't drink, especially not Scotch, and declined. It was a rude decline, I fear. I closed my door and the man with the bottle must have wandered home or to another door with a light on. Only days later did I see the man again, going into the flat next to mine. It was my new neighbour, Rodney Stoke.

Rodney, as I explained to the Police in my statement, never seemed to have visitors except for a teenaged lad, mid-teens, a few long-holiday weekends. As Rodney has no vehicle that I'm aware of, I guessed the boy might be his son, possibly his grandson, and had come to Amble (perhaps from Scotland?) on the train. The boy would have last visited about a year ago, around the time I got Cailean as a puppy. I know the boy did meet Cailean once. Cailean being Cailean, they got on famously.

It has seemed curious to me that a man, my neighbour, Rodney, who lived alone and did not ever seem to have visitors other than the boy, that rarely, and none at all for about ten months, found it necessary to cook such large quantities of meat. Why even have barbecues for one? Well one and the apparent leftovers for Cailean. And why such large joints of meat along with the ribs?

As I mentioned, this is a Bank Holiday weekend and I will admit that I did sleep after the alarm went off at 6.45am. Another hour. And then I woke, half-awoke, and sat up and was amazed at the goings-on. Police everywhere outside, yellow crime scene (do not cross this line) tape around my neighbour's kitchen door and back porch. I sneaked Cailean out for a quick pee, and we were stopped by a tall policeman as we padded back towards our door. Might he have a word with me? Of course. I did not think to offer him coffee as we sat in my front room, I was hardly awake.

The constable asked me about my neighbour, Rodney Stoke, and I admitted I knew very little about him. Just friends by way of Cailean. I have no idea where (or if) Rodney works. As he sometimes has no lights showing in his flat for a few weeks a month, I wondered if he worked shifts somewhere, perhaps on an oil or gas rig in the North Sea. I do see him smoking outside the Dock Inn (where a notice Tranny Night 17 April is still posted, weeks after the fact) from time to time when I'm walking Cailean, though I've never seen him outside here at the flats, not even having a fag like some of the other neighbours do. I thought he must be permitted to smoke in his flat.

The policeman asked me about the domed barbecue in the courtyard. I said it was Rodney's, he'd had it since last summer. Oddly, the next question involved any strange smells. I said that our drains ponged a bit from time to time out in the courtyard. I would put lye in the one with an opening nearest my door which helped control the odours. Questioned about visitors Rodney might have had, I only knew about the boy, and that a year back, and little about him for that matter. We were not officially introduced.

Hours later, when only the yellow tape in the breeze remained, I was outside with Cailean trying to decide on a long or short walk, and bumped into another neighbour from the flats. I asked her about the crime scene, and what had happened to Rodney. Was he alright? She said that she'd learned that Rodney had vanished last night, just hours before the local Police had arrived to interview him on a criminal matter involving a missing person. The Police had found Rodney's flat pretty much empty except for the landlord's furnishings and a few plastic bags from the corner market. And there had been a note, some sort of letter in Rodney's handwriting, left on the kitchen table. Pinned there, actually, by a very sharp carving knife.

All very mysterious, curious. Rather upsetting as one has come to like the quiet life and this was one day I wanted to sleep in and then put my feet up. Now this Rodney thing.

Happens that it was about then that I did wake up at last. Walked through to the kitchen and drew the curtains. No sign of life or death outside. No yellow tape. No coppers. No missing person. No bag of meat. (I'd last had a bag of meat a few nights ago and the chap next door, whose name is nothing like Rodney Stoke, doesn't seem to bring them more than once a fortnight, when he's in town.) Not even a jackdaw coughing. A dream then?

Holy skeletons, Ross. You had me going on this one! I was sure, sure, sure that young Cailean was growing strong off the corpse of that missing Scottish lad. What a great tale and I loved how you crept up on the idea. Truly creepy. I was going to post a note asking how you always manage to find neighbors like the ones you have. There are the Screaming Fighters upstairs and now a butcher next door. Well done!

I'm emerging from sarna-land and will have to go back in time to see what other gems I missed on your blog...

dang, rolph!!!!
i'd forgotten what an amazing yarn-spinner you are!
:O khairete
suz