On Being Raised (As I Was) With Penguins 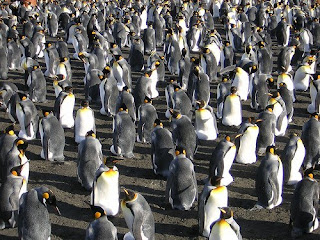 Knowing I loved my books, he furnish'd me
from mine own library with volumes that
I prize above my dukedom.
William Shakespeare (The Tempest. Act I, Scene II)
I WAS HAVING LUNCH with one of my cousins at Barter Books up in Alnwick yesterday and he happened to mention that his son had recently had the opportunity to see a great many penguins in their natural habitat far, far south of here. I felt a little envious for I was, in a way, raised by penguins. Not many hundreds of thousands of them on an icy beach, of course. But more than a few times a Penguin or two accompanied me to Horseshoe Bay in Bermuda, more frequently to our family's dock on the northern shore of Warwick Parish there.

When we were very young, my sisters and I would be taken to the Aquarium in Bermuda by our father. This was one of those separated (and eventually divorced) parents' situations. Father could have us on a Sunday if he wanted to, and if we wanted to be had. As Sundays on the road with our father meant being away from our friends, there was certainly good reason to call it off from time to time. However, many, many dozens of Sundays in the late 1950s and early 1960s might be spent lunching in a greasy hamburger bar somewhere (no desserts, too expensive) followed by a drive over to Flatts Village and the Bermuda Aquarium.

The Bermuda Aquarium was not (and is not) particularly incredible as aquariums go, the biggest draw being a black spider monkey (not a fish, not an arachnid, but a scruffy, skinny monkey of South American lineage) which would take the peanuts we offered through the bars and leap about shrieking in delight, and then have a bit of a wank (as primates will no matter the blushes they create).

Between the fish tanks and the spider monkey was a small pool with a wooden and canvas umbrella arrangement above it. In that pool, and on a few rocks and diving platforms around it, lived (at the most, as I recall) four penguins. They were small, rather shabby penguins and not particularly friendly. There was nothing one could throw to them by way of food as an enticement to do tricks. Wealthier folks would try and bounce big British pennies off their heads (turtles came in for the same treatment and were an easier target), but we had spent our pennies on peanuts for the filthy little monkey round the corner. I recall the penguin population shrinking to two. It was quite pathetic. And then there were none. The monkey made an exit as well. Last I was at the Bermuda Aquarium Museum and Zoo, as it is now styled, the penguin tank had become home to a few small seals, and the place where once a monkey ranged was a hollow with a dusty alligator in it. 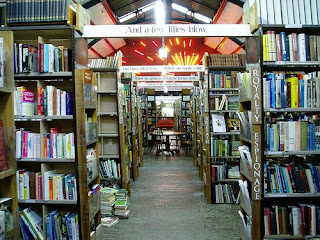 Barter Books in Alnwick, Northumberland, is one of the largest second-hand bookstores in Britain. Hundreds of thousands of books ranging from rare and expensive first editions to recent best sellers. One can buy books (and it's hard to not find the ones you're looking for with so many titles) or sell them. Not exactly sell, but barter them in exchange for purchases at the time or in the future.

The bookstore is housed in a former railway station, with the arched roof and layout so familiar to those of us who travel by rail here. There are a number of rooms and areas devoted to particular subjects. There's a restaurant (I recommend the cheese toasties and a pot of Earl Grey) and a bank of computers in case one wants to compute. A valuation service is provided daily. Dogs are welcome. There are huge murals. Couches, chairs and tables are available if you want to rest (you'll most likely need to as hours can pass). Old railway stations being what they are, there are coal fires to sit by for warmth. And non-gender-specific (unisex) lavatories, which seems European somehow. There's a children's area too, always a plus if you haven't got a caged monkey or penguins.

But Barter Books does have Penguins. Penguin Books. Thousands of them. 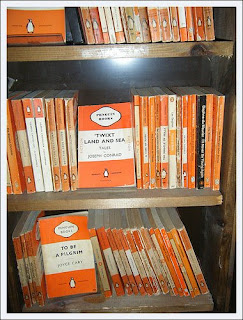 Penguin Books was founded in 1935 with the promise of inexpensive books for everybody and anybody. The price of a pack of cigarettes, I believe was standard, say 6d. That was six old pence. I remember buying Penguin Books for about 1/6 (one shilling and sixpence), but I don't hark back as far as 1935. When I was paying 1/6, I would guess a pack of ciggies was about that much as well. I no longer smoke and honestly have no idea how much cigarettes cost now, but a pack would be over £5, I'm sure. A new Penguin paperback of a classic novel could be less, most of the second hand copies at Barter Books cost about £3.

When I was in my early teens my father remarried for the first time. Beryl, my first step-mother, who I really liked immediately because she had more books than anybody I'd ever known besides the public library, may have brought most of her book collection to Bermuda (from England) when she came out on a teaching contract as she had many, many dozens of the original 6d Penguin paperbacks. Orange and white covers for general fiction, green and white for crime, dark blue and white for biographies, and Beryl even had some of the rarer purple and white covered essays.

While I was looking through Beryl's history books, Penguin was fighting the Lady Chatterley's Lover obscenity case (which it won). Not many years later I was buying my own Penguins, all of DH Lawrence's writings, including the four Lady Chatterley's, as well as all the modern classics (I was partial to Huxley, Mann, Orwell, Woolf and Gide and can still recall my shelves filled with everything I could buy from those writers).

I would go to rummage sales and second hand bookstores in Bermuda and one couldn't go wrong looking for Penguins. The spines on so many of my books were bright orange. Like real, feathered penguins, the thousands of Penguin publications are as individual and different, and each has its own call and is recognised immediately and exactly, even in a huge crowd, despite the similar outfitting.

In Barter Books yesterday I noticed that their very old 6d version Penguins are on display at the ends of rows in their alphabetical fiction section. I recognised titles that I've had in my time, plays by George Bernard Shaw, and Erewhon by Samuel Butler, and many titles by DH Lawrence (before Chatterley). I looked inside one book and it had, in ink, the name of the original owner and the date 1935, and a college address. A charming discovery.

If I were on an ice sheet with a million penguins and could take a few home with me, I think one might appreciate that any two would most likely be fine given the colony. In Barter Books yesterday, with hundreds of thousands of titles in something of a blur, and having only scratched the surface in my favourite sections, I came out with a couple of books that will, I'm sure, be winners. One is not a Penguin, but a large pictorial biography of Lewis Carroll (I went down a great many rabbit holes when I was younger and I'm still partial to Alice and mushrooms).

So far as I can recall, I've never binned a book that I've owned and wanted to dispose of. When I have uprooted myself from time to time and couldn't afford to take all my books, the ones left behind would go to second hand bookstores and rummage sales. I do that reluctantly, though there may be something selfish about withholding a book one has read (and might not read again or refer to) from a second hand bookstore.
Posted by Ross Eldridge at 18:38

Interesting ramble through penguins of all kinds, Ross. I liked the connection to the publishing company . . . and your thoughts on books were interesting. I was waiting for mention that Cailean has a little stuffed penguin to curl up with.

You're getting much, much better.