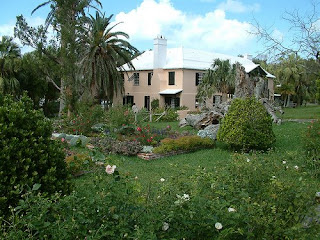 Waterville, Bermuda
WIMBLEDON FORTNIGHT 2009 closed with a bang. Early in the afternoon I'd walked Cailean down by the River with a friend. We came across a fairly-well-organised badminton tournament on the meadows: bright and happy people not at all concerned by the dark clouds building on the horizon. It certainly looked like fun.

Exactly 40 years ago, I first did my first house- and dog-sit at a very old home in Bermuda called Waterville for some family friends. I was working at the early incarnation of AIG, learning how to fiddle the books, and our friend, MEM, named for her initials, and her husband, Mike, were off to the Azores to look at some property and wanted someone to feed their golden retriever his fish and cabbage (he was on a diet) and to walk him a couple of times a day. MEM was my partner-in-crime at AIG. Brandy was a lovely dog, he'd appeared at MEM's door, a stray, and attempts to locate his owners had not succeeded. Mike and MEM had a cat, Charlie Marmalade, who died not long after they adopted Brandy. Charlie was buried in a pet cemetery in the grounds of Waterville.

Waterville had been built in the 1700s. The upper floor had been a home and the ground floor was warehouse space. It backs onto the Harbour. The house had been one of the homes of the Trimingham Family. The Triminghams had an emporium in Bermuda, quite a famous place with high-quality goods, until a few years ago when the business went broke. The Front Street shop has been pulled down and an office block has been built there.

Back in 1969, Miss Elsie Gosling, the retired Head Librarian, whose mother had been a Trimingham, lived on the upper floor of Waterville surrounded by family portraits and memories. The ground floor was divided into a large apartment where MEM and Mike lived (where the American author James Thurber had stayed regularly at one time) and an office of the Bermuda National Trust. The National Trust had taken over the property. When Elsie Gosling passed on the Trust moved into the upper floor, and they are there at the present time. I don't know what happened to Elsie's family pictures.

In the grounds of Waterville, back in the 1800s, a lawn tennis court had been laid out. The court was still there in 1969, though it was no longer used as such. The turf in Bermuda is locally called crab grass and it is rough and thick. I don't play tennis, but I imagine it is nowhere near as easy a surface as the grass courts at Wimbledon.

While I don't play tennis, and never have (I was briefly tempted to learn when the new AIG building in Bermuda featured tennis courts next to the parking lot out back), I decided to buy the equipment to play badminton. With friends I would set up the badminton net on the old tennis court lawn at Waterville. We'd knock a shuttlecock about in the evening and on a weekend if I wasn't working overtime. I had sufficient hand-eye coordination 40 years ago to make a bit of a game of it. Frankly, more fun was the challenge of keeping the shuttlecock in the air as long as possible.

I continued my house- and pet-sits at Waterville for many years, until MEM and Mike retired and left Bermuda. Not for their property in the Azores, they went to British Columbia. Brandy followed Charlie Marmalade to the Waterville pet cemetery (their markers are still there, behind a pagoda in the gardens). I'd spent summers and Christmases at Waterville with Brandy and was, at times, joined by friends. James Thurber's ghost never visited. 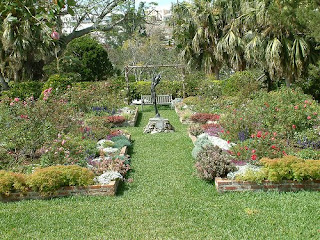 Over a decade ago the National Trust decided that the grass tennis court at Waterville would be better utilised as a rose garden and it was planted out and a sculpture placed at its centre point. A huge tamarind tree that had shaded the southern end of the tennis court for over a hundred years collapsed and was cut down, for ever changing the appearance of the property. 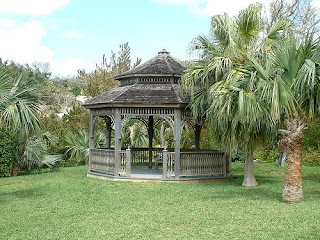 Pagoda, Waterville, Bermuda
I was last in the Waterville gardens about five years ago, walking with a friend, and we ate sandwiches in the pagoda and I told him a bit about Brandy and Charlie Marmalade (he'd been a ginger tomcat, did you guess that?) and we pushed through the somewhat overgrown rose garden. My friend was somewhat amazed to hear that I'd laid in the shade under a very tall and broad tree there once upon a time. A tree-shaded tennis court!

We've all been hoping Britain's Andy Murray would win Wimbledon this year, but he got knocked out in the semi-finals by Andy Roddick, who went on to play Roger Federer in a splendid final yesterday. After Murray's win I noticed that on one television report he was no longer referred to as British, but as the Scot.

Roger Federer and Andy Roddick really battled for the win and the event and result is history. Federer is now the greatest champion of all time with 15 Grand Slam victories, I'm glad he won.

Just after I watched the presentation of the cup on the telly, and the post-game interviews, there was a distant rumble outside the flat, then heavy rain on the windows. I picked Cailean up and headed to the back door. As we watched the rain pouring down in the courtyard there was a sudden incredibly bright flash and almost-immediate thunder. The world shuddered.
Posted by Ross Eldridge at 11:10

oh, how i love this! look at beautiful waterville. i always think of it as yours.
you were home just 5 years ago? and yet you don't think you'll go back? why not?????
khairete
suz