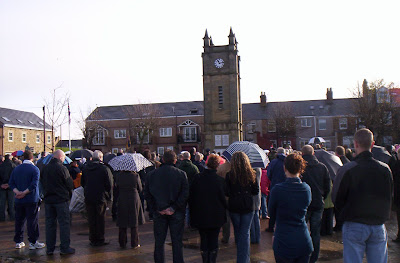 Think not that I am come to send peace on earth: I came not to send peace, but a sword.
Holy Bible. St. Matthew 10:34

False Sphinx! false Sphinx! by reedy Styx old
Charon, leaning on his oar,
Waits for my coin. Go thou before, and leave
me to my crucifix,
Whose pallid burden, sick with pain, watches the
world with wearied eyes,
And weeps for every soul that dies, and weeps for
every soul in vain.
Oscar Wilde. The Sphinx

I'VE JUST RETURNED HOME after attending the Remembrance Day ceremony in Amble by the Sea. It was raining heavily early this morning, but had eased to a drizzle when I walked along to the Town Square. A considerable crowd seemed relieved when the sun broke through a few minutes before the two minutes silence and wreath-laying was to begin.

I didn't take Cailean with me, which turned out to be a wise move. We've had Guy Fawkes Day fireworks every night this past week and Cailean has been awfully upset by the flashes of light and explosions. At eleven, the clock in the tower in the Square did not sound, but a rocket was launched nearby and we all went very quiet. Two minutes later another rocket went up and the person leading the parade called for the Mayor to lay the first poppy wreath below the names carved into the memorial in the tower. I think Cailean would have barked.

During the First World War dachshunds in Britain were kicked, stoned and killed in the streets for being German. The Royal Family escaped that, a simple name change. Another dachshund story related by Robert K. Massie in the excellent book Dreadnought: During the Great War a member of the German High Command threw a party in his large country home. All the military leaders were invited; many came, though the Kaiser sent his regrets. Just as well, the host came down his grand staircase to greet the guests below dressed in a pink ballet dancer's tutu. His dachshunds were running rings around him. He stumbled, fell, and was quite dead (natural causes) by the time he reached the horrified crowd. Apparently it was not at all easy to get the plump corpse out of his tutu and into his military uniform so that things did not seem too peculiar when the body was to be collected. 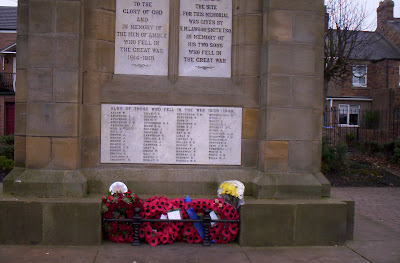 During the brief silence this morning I did think of my grandfather's brother, James Arthur Lancaster, killed in the Pas de Calais on 2 September 1918. I also thought of my many close relatives who served in the armed forces (most in the Royal Navy) in the past 200 years and came home to their parents, wives, children, home to England. My cousin's son is an officer on a Royal Navy ship at this moment, and I thought of him out there in harm's way.

Noticing the young army cadets taking part in this morning's ceremony, I remembered being forcibly enrolled into our school Cadet Corps shortly before my fourteenth birthday. We had uniforms that were less comfortable than the ones the lads and lasses get to wear, as volunteers, these days. We had metal studs on our boots and when we stamped we made a great noise. Noise is good on parade, if not when you are marching towards your enemy. The parade today was dead quiet.

During the week there was a news story on the television showing British troops in Afghanistan preparing for Remembrance Day by erecting a very large wooden cross in their bleak desert encampment. It was a cross big enough to crucify a god on. And I was horrified!

I imagined Afghani folks, in their own country, coming by on foot, on horses, however they travel from village to village, and there's an enormous Christian cross on the skyline. I cannot imagine many Muslims all over the world seeing this on the television being too impressed to see that the spirit of the Crusades lives on.

We had Christian prayers in the Square in Amble today. I believe they were led by a Methodist preacher this year. We were remembering all our war dead (I suppose we are not to remember our dead enemies, even those who were Christians, at these times), but many non-Christians from the British Empire fought and died alongside those of us who might believe Christ walked on England's mountains green. Is it time to use a line from the play Sordid Lives: "Come down off that cross, buddy. We need the wood."?

There are a great many ghosts created on battlefields. At least seven of our boys died in Afghanistan this past week. One loses count.
Posted by Ross Eldridge at 13:37

I've been M.I.A. recently (at least as far as commenting on your blog is concerned), but I have been reading and enjoying your posts.

It sounds as though it's a good thing young cailean is not an Afghan hound. People are so silly, aren't they?

I remember some factions in the USA decided to quit drinking French wine when the French decided, having more sense than we, to pull out of Iraq. I believe these same twits renamed French Fries Freedom Fries.

one has to gasp at the hubris of erecting a christian symbol in a country where we at least have the perception of nation-building. religious tolerance in the US is a reality to the degree it's compared with truly oppressive regimes, but in spirit it's almost totally farce.
khairete
suz