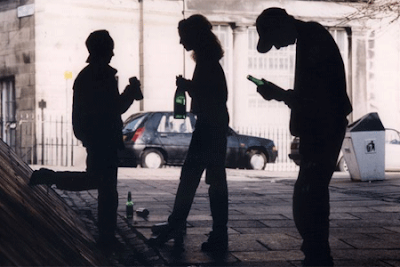 Youth is wasted on the young.
Oscar Wilde

What's another word for a mother in Camden Town? Schoolgirl.
Frankie Boyle

I'M GLAD I'M NOT A PARENT. It was bad enough having parents that failed to meet the high standards that I believe all parents should meet. I should point out that I've honed my thoughts on parenting only recently as I see teenagers behaving and misbehaving. I am old enough to be their grandfather, suddenly I give a hoot.

I was not given any training by example when it comes to raising children. It took a rather long time, but I've forgiven my father and mother for their failures and failings. They should never have married, but I think I understand, now, the pressures that brought all that about. My parents were married in August 1947. I think they both were seeking some sort of stability; the War had just ended, they were in a foreign country, and, sadly, they'd not had the chance to play the field in the early 1940s.

My mother was advised not to have children because of some considerable health problems. No matter, she had three. She paid the price for that. I dare say my sisters and I are grateful. I know I am on my good days, and there are many of those.

By the time I was starting school, my mother was discovering the horrors of single-parenting. In the mid-1950s this was not a common thing, especially among white middle class folks living in Bermuda. The family, on both sides, back in England, could not understand how a husband and wife could possibly separate when there were children in the equation. My father once visited his grandfather Crow, taking along a lady friend instead of my mother. "Where is Mavis? Where is Mavis?" asked my great-grandfather, who just couldn't get his head around the misbehaviour of the young. My parents, at their wedding, had pledged "Till death us do part…" and for richer, for poorer, in sickness, and in health had been in the vows.

I'm "into" genealogy and family history, and have just about everybody I descend from, and many extras, for over two hundred years, and some lines go back to the time of Henry VIII, and some go back to the time of the Saxon kingdoms. In all of those families I come from, divorce was extremely rare, though the Normans certainly were not averse to messing around. Illegitimate children did turn up. I'm not sure that comparing family life these days to that in the Middle Ages (and earlier) would be a useful exercise.

My great-grandfather James Henry Proctor was illegitimate. His mother was Mary Ann Proctor and his father was John Clough. In 1869, if your parents were not married (to each other) you could not take your father's surname. Mary Ann and John did eventually marry and had several more children. So five of James Henry Proctor's younger siblings had the surname Clough; his older sister, also born on the wrong side of the blanket, was a Proctor. I don't know if the stigma of all this bothered James Henry, he was sent off to work in the mill at the age of nine because he was tall and could fool the bosses into thinking he was eleven. My great-grandfather married, had seven children, only one (my grandmother) surviving into old age. James Henry died young.

I know that some of my blood relatives were partial to drink. My great-grandmother Jessie Moon Crow preferred to drink whisky alone in her kitchen rather than make conversation with her family and guests in the front room. I've seen photos of the lady and she looked pretty rough, but she reached a good age. My great-grandfather Harry Lancaster would celebrate the weekend in the pubs below Harle Syke, and at least once he vomited out his dentures into the drop toilet in the family's small back yard. Plumbing was quite cooperative in those days and my great-grandmother was able to retrieve the false teeth the next morning when they had washed down to the filtering mechanism at the waterworks.

Last night, on BBC3, I watched The World's Strictest Parents. Now, normally I would not have even considered giving an hour of reading time up for that sort of thing, but the synopsis in the Radio Times guide read: "Unruly 17-year-olds Hannah Thorpe from Liverpool and James Gowing from Leicester are sent to live under the strict rules of a God-fearing Morman [sic] family in Utah." That's one of the very few times I've seen a spelling mistake in the Radio Times, and Mormons interest me as some of you will appreciate. I certainly witter on about them enough!

Hannah and James appeared to be the most obnoxious brats one could unearth in Britain. Both live on benefits and Hannah explained that by cutting back on what she spent on her illegitimate baby she could afford her drink, drugs and cigarettes. "What's the most common bird in Britain?" asked some wit. "The slapper." And binge-drinking, chain-smoking, vulgar, under-dressed Hannah is the poster child for all that is wrong with Britain's youth. James was harder to figure out. He seemed very nervous, came across as gay, though it was never mentioned. He applied a good deal of make-up each morning, and his clothing was as dodgy as Hannah's. Hannah talked Scouse, and James tried to sound like a black rapper, and I noticed his pancake make-up was an orange colour. James is the poster child for a generation that wasted its chance at a good education; he seemed more intelligent than he thought he was.

Off to Tooele, Utah went these two miserable little shits. I've been to Tooele, Utah and it's not exactly the Promised Land unless you are a God-fearing Mormon. They process toxic waste there (making the Hannah and James project logical somehow). The enormous Bingham Copper Mine is nearby, and that is actually worth the visit. But to live there? Not for me!

Of course, the whole point of Strictest Parents is the inevitable blow-up and confrontations between the hosts and their vile house-guests.

Strict, God-fearing Mormon families are pretty scary, but I approve of some, perhaps much, of what they are about when it comes to child-rearing. These were not just Mormons, but Americans and in ultra-conservative Utah. The Stars and Stripes flies in the yard, the family pledges allegiance to the flag and for what it stands each day, and I think they recited the Declaration of Independence. The mother home-schools her four children. The standard they live by is simply: "What would the Prophet do?"

The Mormon mother was shocked to hear that Hannah had a year-old daughter. I wondered what she'd have thought had she seen a picture of the little girl, who was very dark-skinned. Until 1978, Negro blood would keep you out of the Celestial Kingdom of Heaven.

Well, the worst of Britain, James and Hannah, ranted and raved and craved. They tried to run away, but Tooele is very nearly the end of the world. (In fact, it can be seen from there.)

For some reason, the guests were dolled up at the end, Hannah wearing a beauty queen's gown (the Mormons are mad for beauty contests) with a tiara, and James was found an ill-fitting suit, if not a tie, and they were spirited off to a reception in the State Capitol in Salt Lake City. There they were offered apple cider in flute glasses. Hallelujah! they thought. Cider! Of course, Utah cider is alcohol-free.

Hannah and James wept when the time came to go back to Britain. Back at home there were promises of a new start.

Both James and Hannah came from broken families, and I was not at all impressed with their mothers who simply indulged their impossible kids. Perhaps not so much indulging them as simply not bothering.

I'm afraid, in my fast-approaching old age, I think that children should not be permitted to have children. Abortions for very young mothers should be mandatory. There should be no benefits for schoolgirls who decide to take a pregnancy to term. I am very pro-marriage, but think it should be more difficult to get married. No benefits for unmarried partners. There is an ongoing case about a mother who arranged for one of her children to be kidnapped and then appealed for money and support (and got it). She was found out and is now in gaol, as are several associates. That unwed mother had seven children by five different men. I say she should be sterilized, and in light of her crime never allowed near children again. Unwed fathers in similar situations should get the same treatment. Cruelly, perhaps, I think all children should have to attend school until their 18th birthday, without exception.

Our Nanny State worries about three-legged races being too dangerous for our children, and the Three Little Pigs offending our Muslim population, and paedophiles behind every bush. How about really tackling the rot in British society? Let's make some extremely tough choices.

I wonder if Mr Eldridge harbours a dark, insidious desire to write for the daily mail.

I'd write for the Daily Mail, but you wouldn't catch me reading it!

My real dark, insidious desire is to channel Enid Blyton and write some more Famous Five stories. That was the real world!

if those rotten kids hadn't ended up toeing the line (and how much of that was bribery, i have to wonder?) they never would have aired. and most kids would stifle under a mormon thumb that oppressive. i tend to go for a middle ground myself when it comes to kids, and like you i cannot bear spoiled brats.
with our shiny new health care policy leaning far to the right in excluding pretty much all abortions (from taxpayer money, not necessarily the act) your solution won't fly here any time soon. it makes an excellent counter-foil to what so many in this country want, though. no aid for desperate or vile mothers, and no help for desperate soon-to-be-vile kids, but by all the gods above and below, ensure that the poor keep squeezing 'em out!
khairete
suz