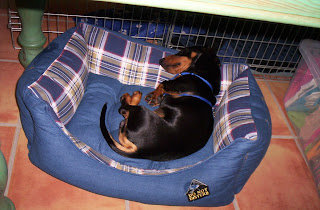 I suppose it was bound to happen. Beginning a blog, I mean. However, until some ungodly hour (well, before my first cup of tea) this morning, I just couldn't be arsed to fill in the profile information and figure out the films I liked best, and stand on tip-toe to look out the window to see where, exactly, I was. Turned out, I was on my tip-toes, and I recalled rather liking Moby Dick when I saw it back in 1956. I like Moby today. Make up your own jokes about Dick.

If all goes to plan, this blog will be written while sleeping dogs lie. Well, sleeping dog, in his bed, at my feet. If the boy wakes, he'll most likely request a two-hour walk (which includes visiting all the shops he's welcomed in for chats and dog-treats, and saluting lamp-posts, so, PETA, he's not using those wee legs for a full 120 minutes) and the blog might be a few notes on scraps of paper. If I can, later, extract my Great Thoughts from my Emergency Shopping List Items, the blog will grow, despite the tired feet.

Something about me, then. In Amble, I am a tall person. I think that the people who have lived in Northumberland for generations have grown smaller and smaller, through Natural Selection, to be more comfortable in the coal mines. There are a very few, still living, pit donkeys left ... such diminutive things. There are low door-frames on houses with low ceilings. And there are miniature apples on the tree in a neighbour's garden. I've not figured that connection out yet. Still, for all my great height in Amble by the Sea, I am short. Do I love Amble for the countryside, the North Sea very nearly pounding at my door, the castles nearly a thousand years old, the dialect, the lovely people? Or is it just that I feel tall?

I have a dog, born 8 March 2008, so he is rather young as I write this, but house-trained, at least. He is from Gateshead, forty miles to the south, and I think he is a miniature (dachshund, in his case) because his ancestors were bred to look in rabbit warrens, not because they were fetching coal out of tunnels running under the North Sea with their teeth. The boy likes to track the bunnies. His name is Mistymorns Cailean. Cailean is a Gaelic name meaning "young pup" ... the Anglicized version would be Colin. Oh ... I know that name.

When I'm not reading, cooking, repotting plants or taking Cailean to the River or along country lanes, I try to write things. However, I have difficulty writing to order. What I write usually arrives late at night, but turns up looking quite nice, even overly proper at times. Quite! Rather! Don't you know? I say! For I "hear" my inner voice speaking in a posh accent, and I put it down that way. If you come across my words: "Bugger off, peasants ...!" you must read them just like HM Queen Elizabeth says them, to hear the real me. We don't have many peasants in Amble now, but we are up to our tits in pheasants. Another reason to like it here. Fair game!

Finally, I don't use after-shave or any sort of fragrance from a bottle. Cailean would not permit that. I could rub steak behind my ears for him, but the gravy would be hell on my shirt collars. One has to drawn the line.

Yes! It's about time. I'm so glad you're going public. Your first post was so much more than my first. Mine was so hesitant. You're stepping out in style! And taking Calean with you. Kiss his nose for me.

Ross, I just love the way you write! Your little guy is growing up so fast!!! Thanks for posting his picture as well. Welcome to the blogger world and I can't wait to see what you have to share.

Ah, Ross. Welcome to the blogashere! I love the idea of meat behind the ears for you beloved. Whatever turns your lover on, right?

I am presently here in Japan, as you know. Apparently, according to my daughter-in-law Yuka, Gaijin stink because our perfumes are too over-the-top. Maybe a bit of wasabi would turn them on...

I look forward to your rumminatings, formal or down to earth. It's always nice to read a bit of Ross now and again.