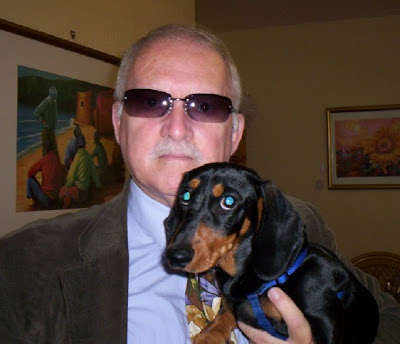 I thought I might record just a little of my Cailean's history. That is Cailean in the picture, with the ginger beard. My whiskers, when I grew them for a few weeks to see how I'd look with my wattles hidden, came in quite white. Looking at the photograph, I suddenly appreciate that our noses are not unalike. I also look a day older than God. Cailean was five-months-old at the time.

I did not get the £50 family pedigree from the Kennel Club, and so I have in front of me only the £12 version, and that shows just Cailean's parents. His Sire is Mistymorns Choc N Cream, better known as Buttons. Mum is Ruby, the friendlier version of Sokel Save the Best for Last at Mistymorns.

As you can see, my little dog is a miniature, smooth-haired, black & tan dachshund. Buttons is also a black & tan, Ruby is a red dapple. If Cailean grows no bigger than his parents, he will weigh about 5 Kg when he is fully mature. He is very nearly there by length and height, but I imagine he'll gain another half a kilo. At 11 pounds, he will weigh the same as my last dachshund, the disagreeable chocolate dapple Aleks.

Cailean was born in Gateshead, some 40 miles south of Amble, on 8 March 2008. I heard about Ruby's pregnancy a month before she had her five puppies, and put my name (and a £50 deposit) down, and then waited (and worried like any expectant father) to see what I'd get. The deal was done online!

Jacqui Carver, the breeder, sent me photographs of the puppies weekly. I had chosen the black & tan male from his picture the day after he was born (and named him, he was called Cailean immediately). Cailean has a brother called Billy, and sisters Lucy, Delilah and Ruby-Roo. They are all different colours. Remember Fr. Gregor Mendel from your biology lessons?

Happens, I chose not to go to see Cailean until the day I was to bring him home: 28 April 2008. It was a rainy Monday. A very rainy Monday. My friend, Marion, had volunteered to drive me down to Gateshead, and a mate of mine, Gavin, came along too. We used the SatNav and were at Jacqui's home in less than an hour.

Jacqui, and husband Rob, made us cups of tea and fetched a freshly-made quiche from the oven, and unleashed the hounds.

It seemed proper to introduce myself to Cailean's mother first, and Ruby was quite charming. If she was aware that the first of her pups to leave home was going that morning, she seemed not to be bothered by it. Looking at her teats, I thought this might be a welcome relief!

I was handed Cailean, such a tiny lad at seven weeks, not much over a kilo. He licked my chin and my nose, and the deal was done.

Jacqui had, at that moment, 13 miniature dachshunds at home. She keeps her dogs inside the house, no kennel in the garden. They are well-socialised. As we sipped our tea, most of the dachshunds re-enacted the chariot race from Ben Hur around the coffee table in the living room, stopping only to widdle on the many Doggie Pads on the floor. I certainly recommend these absorbent training pads; I had Cailean house-broken in a fortnight.

It was time to leave his father and his mother. Bundled into a blanket, Cailean went out into the rain with me, Marion and Gavin, while a dozen dogs barked farewell.

Another hour through the storm, a little whine now and then, and, at my flat, now his, a few laps of water and straight into his new bed, where he slept for two hours. I checked on him several times. Should the child be so very content, so quiet? Had he died of fright? I heard him wake and walk on the kitchen floor, so I gathered him up and brought him into the front room.

Then, as I reclined on the sofa with a book, Cailean stretched out on my chest, his nose to my chin, and slept.