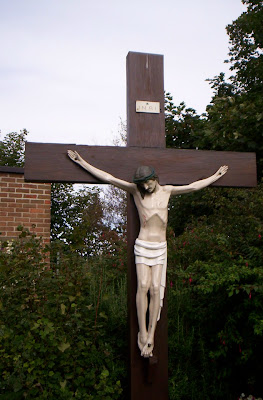 I have walked by, and driven past, St James's Park a number of times, but I have not been inside. However, over the past few years, the names of some of the characters associated with Newcastle United FC have stuck in my head, and I've even experienced the occasional frisson when something good (not often), or something terribly wrong (frequently), happens to the Magpies or Toon, as we commonly refer to the Club.

Yes, I seethed over Joey Barton, and I'm pissed off today with his mere twelve match suspension (it may be as few as six if he behaves, which is doubtful) for his act of violence against another player. Toon manager, Kevin Keegan, stood up for Barton. Thousands did not. I'm not sure that I believe in a God that follows footie closely. At least I didn't until this week. Suddenly, it seems, things became so uncomfortable for Kevin Keegan, that after several days of wrangling, hours and pages of media time and space in the Northeast, then the UK, then across the globe, and large crowds shaking fists outside St James's Park—even without the benefit of a few in Shearer's Bar—in the deluging rain, Keegan quit last night.

Some of the headlines in the Journal:

Those from pages one and three only! It gets worse:

"Supporters endure day of torment at the gates"
"Don't you mess with a Messiah"
"Closest thing to God has gone, says fan" (That headline in a Millennium-sized, very bold font.)
"Why tell us nothing?"
"Fans salute one man who feels their pain"
"Shambolic day really tested my patience"

And, of course, photographs of Kevin in happier times. The man should have been shot for the hairstyle when a player back in the 1980s. He must have spent more time at the beauty parlour than practising with a soccer ball, and as he wasn't such a great player, all told, but had charisma, he did very well. It was said that when his hair was flapping about, the massive perm of black curls, the other players simply couldn't tell what was going on beyond him. In the right situations, this would have been useful.

He's gone now, he's resigned, it's official. It is Friday night. The fans will be crying in their beer. Hopefully, the continuing soap opera that is the Toon will resume tomorrow.

Meanwhile, I have to face up to something Chris Gibbons, a footie fan in Bermuda, told me eight months ago when Kevin Keegan returned to manage Newcastle United (which was then in a dreadful slump and in danger of being relegated). Chris said something like this: "Keegan! Hah! The minute things start to get a bit tough, Keegan will get going!" And I protested. The Toon turn of mind was affecting me already!

*
ON PAGE TWELVE of the Journal there is a headline on quite a different subject.

This story is making national headlines—we are a nation, even if we have no credible government at the present time—as it involves an outrage against public decency. I'm sure even the tacky newspaper The Sun—which always features a topless blonde on page three—is noting that the Baltic Gallery on the Gateshead Quays across the Tyne from Newcastle proper is in court, charged with displaying something so offensive that a Christian lady in Essex decided to make a private case against the Baltic.

The prosecuting lady's name is Emily Mapfuwa; the shocking artwork, which was exhibited for a few months at the end of 2007, is owned by Newcastle-born billionaire Anita Zabludowicz and her husband Poju; the artist that created Gone, Yet Still is a Chinese-American chap called Terence Koh. All good English names, eh?

And the piece of art? A white, plaster figure of Jesus Christ, only a foot high, portraying Him considerably over-dressed and—here's the rub—sporting an erection. The newspaper uses the words "in an aroused state" which could, it seems to me, mean, if you wanted, no more than he was pricking up his ears. So, I'll say "erection", just so you don't picture his ears.

I guess the loss of our Messiah, Kevin Keegan, got me started. I was in no mood to read about art censorship. Not that there is any obvious connection between the stories. Just the business of annoying news.

During the reign of Queen Victoria, explorers from Great Britain went to Egypt and snapped the phalluses off the statues of the pharaohs and their chums, and scraped off and over-painted the offensive things on the walls and columns. Never mind the art, it was history! And never mind Victoria had nine children and had, one assumes, some experience with erections. The Christian thing was to pretend they didn't exist.

The Puritans smashed statues centuries before, and whitewashed walls, and applied loincloths and leaves to the most exquisite private parts in art. We regret that now.

I'm one of those blokes who believe that if Jesus Christ existed, it is most likely that there was a Mrs Jesus Christ, and children. And if He got the wife with children, I'm guessing he got aroused, and not just around the ears. The Mormons were taught (though they tend to avoid the subject now) that Jesus was fathered by a God with Mary in a normal act of sexual intercourse. No Harry Potter magic.

I also believe that Christ's apostles were married men, most likely with children. So, we don't read about the wives, kids, in-laws, kitchen curtains, colour of the fishing boat. It's not because they didn't exist, it is because the Gospels concern other things and, in those days, writing anything down was quite an effort. Keep it brief! I'm sure that was uppermost in the minds of those who wrote the New Testament. So, I think Christ and his followers were regular folks.

I don't think they had halos, or wings, or glowed in the dark, or had beating, bleeding, bright-red hearts hanging out of their chests … all of that would be weird and, frankly, I find it unpleasant. Bad art, but I wouldn't censor it.

Am I offended by a statue of Jesus with an erection? Not at all. When I was a child, seeing the movie The Bible at the cinema, I certainly giggled at Eve's long hair awkwardly taped to her bare breasts as she stood behind a medium-sized shrub. That is offensive, to see that sort of daft censorship. It was the censorship that made it vulgar. I found, online, a photograph of the statue in the Baltic case, with the naughty bits pixillated to keep me pure.

Bah! I looked up a photograph of Michelangelo's Risen Christ (of the Minerva) which has a completely naked Christ holding a cross and striking a slightly clumsy pose that the experts suggest Michelangelo used elsewhere in his work (look at the Rebellious Slave, for another example) to somehow suggest movement and vitality. Doesn't work for me, unfortunately. And Jesus is naked, for all to see, and I don't think he's circumcised. You'll recall the David isn't either. Was it an oversight? Was it censorship? Was it some distaste for something so, erm, Jewish?

It is not as if Terence Koh's tiny statue had a white dove perched on the offending part. That would have been funny, and forgiveness never extends to humour. (We read in the Bible that Jesus wept, but not that he laughed, smiled, giggled, slapped his mates on the back while guffawing, kicked a ball around while telling a funny story, or had any sort of a good time. And you just know he did all of that.)
*
SO MUCH FOR art, religion, football, and no sense of humour. So much for the overly dramatic. And if Kevin Keegan really is the father figure of football in Newcastle, could he pose for Terence Koh and prove it?
Posted by Ross Eldridge at 17:59

and here in our land of the free and home of the brave, we have that bastion of purity john ashcroft who draped the breasts of venus so she wouldn't distract him during a press conference.
well. She IS venus, after all.
i think a statue of christ with an erection is silly, done simply for shock value and not any sort of deep profound statement. the yahoos who squawk to censor it are just playing into it.
a pox on all their houses.
@@
khairete
suz

I like your common sense, no nonsense take on all this, Ross. If god created man, and designed all the parts to keep the race going, then what the big deal? And if he didn't, then, I repeat what's the big deal? But I can see why some would be offended. I can always see both sides.