The World Always Ends on TV 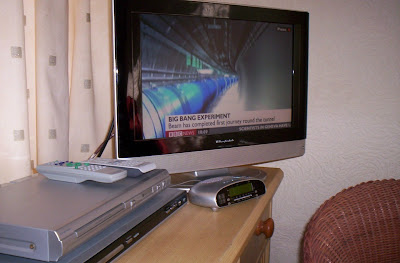 I'VE HELD OFF writing up my brief notes on the Large Hadron Collider experiment just in case the other shoe dropped and there wasn't much point in doing it. No computer. No Barking Mad blog. No Internet. Nobody out there. No Amble. No out there.

But the experiment is incomplete, even though the news headlines announced that the universe had not ended. The news of our survival may be premature. The risky bit, when the particles going clockwise around the LHC accelerator in Switzerland meet the particles going anti-clockwise, will only happen, they now coyly say: Some time in the next month, perhaps. The other shoe is yet to drop.

Last Wednesday morning, 10 September 2008, just after eight o'clock, the LHC was to be fired up, and if the red standby light turned green, big things were going to happen. And it was going to be on the television. Some said it would be the end of the world, the end of the universe, live from Geneva.

There could be small Black Holes created when these miniscule protons bumped into each other at very nearly the speed of light. [99.999999% of the speed of light, apparently, which is almost as fast as the speed of a dachshund grabbing a bit of steak. I'd like to race wiener dogs round that 17 mile track.] Black Holes worry people, even if they really haven't got a clue as to what they might be. If only they'd been called Pale Blue Holes, everything would be hunky dory.

The things that could be discovered, that will be studied, and the measurements, the names, the contortions, and logic, are so peculiar (the Higgs boson, electromagnetic symmetry breaking, masses and decays of quarks, dark matter, dark energy, extra dimensions, the string theory) that my mind would be wound up tighter than Stephen Hawking's voice machine if I tried to think too much about them. [Please note that I have my own String Theory: No matter how long you cut a piece of ribbon to tie up a Christmas present, it is always too short.]

I was home on Wednesday morning. Optimistically, I even made my bed. I skipped my bowl of cereal and wondered about a beverage to consume while watching the big Switch-On on Channel 80. Tea? Coffee? Hemlock?

Cailean joined me on the sofa as I settled down with my coffee. I reached for my TV remote. The upper left button should switch the flat-screen on, but the battery is loose and I had to whack the remote a few times before it made contact. What do you expect for £250?

White men, a very few white women, and no people of colour that I noticed, were standing around or sitting around on what might have been the deck of the Starship Enterprise. Lights were a-flashing, screens were a-screening, and a voiceover from London told us that we were watching the control room at CERN in Switzerland. Then we got to see some animation. We even had a bird's eye view of that part of the Swiss-French countryside with a dotted line superimposed to indicate where the LHC was buried. I wondered if it ran under anyone's bedroom. Imagining Claude calling Marie to the window and saying, in French, of course: There's a big dotted line coming straight towards us from the east, and going out again to the west. WTF?

The voiceover said that it was about time to turn on the Large Hadron Collider. I was astonished to hear that it might just not work. That's what they said. The whole project was so far out: Who could be sure? And what do you expect for £5,000,000,000?

If it had refused to operate, I expect some boffin would have called out: Try switching it off, then on again.

A sip of the coffee, I stroked Cailean's ears. I waited to be dragged by a mighty wind across the North Sea, up into the Alps, and through a small black hole, surrounded by millions of spinning chocolate bars and Rolex watches to find Tom Cruise being crowned Grand Poobah by tiny, green aliens fresh from a tear in the Space-Time Continuum. Nothing. Not one Toblerone wrapper.

The television news team went over to another story. A banner on the screen promised an update regarding the Big Experiment later in the morning. No World's End, just Credit Crunch. This reminded me I'd not had breakfast. I got on with the rest of my day, but left the TV running, the sound muted.

It was mid-morning when the headline came up to announce that one beam had gone around the LHC successfully. Hopefully a second beam would take the opposite track in the afternoon. But the real experiment, to get the beams to collide: Some time in the next month, perhaps. In fact, the second single beam made its trip before day's end, before the world's end.

As we survivors of this non-event know, some time next month might be around 21 October. Put it in your Doomsday Book. And pray the Universe has a Reset Button.

That might be the end of this post, but I saw a programme on the TV last night that included an interview with a man in America, outside his home on the Texas Coast as Hurricane Ike approached. All the residents in his town had been told to evacuate their homes immediately, there was almost certainly going to be some heavy weather, perhaps a huge storm surge that would wash anything in its way from the face of the Earth. The man insisted: I'm not going. I believe in God, and he'll look after me. I'm a Christian.

And a damn fool, I thought.

One wonders what they will discover from all the data collected in this Large Hadron Collider experiment. Perhaps we will find an alternative source of energy, or a fourth dimensional Internet, or a permanent cure for fleas, as you suggested earlier.

I thought this happened in France, but I see it is the Swiss who are onto the game. And didn't Texas have some of those dreaded "earmarks" for a project of this nature several years ago? I think so; it was dropped because of the high cost.

I find the whole thing very interesting. And if we all go "poof" one day next month, well we'll all know who to blame--The SWISS.

hee! you're always good, dear bolphie, but this one has a particularly lovely edgy zing!
claude and marie made me snork out loud.
:D
khairete
suz

Funny, ross, with a edgy side. And, the thing is? Maybe there is something special awaiting us all in a black hole. Maybe it's the only way to get to Nirvana. I know. I'm a damn fool, too. :>)