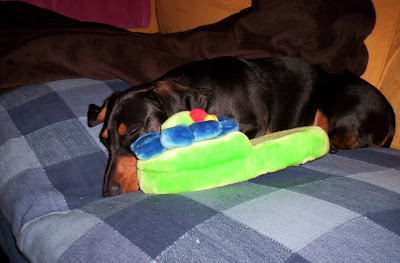 WE WENT TO BED EARLY last night, and then woke at midnight. A quick walk outside (cold, a bit foggy), then we settled in the front room, the little fibre-optic tree switched on, and the electric fire that looks like burning coals (those were the days!) taking the chill off.

I gave Cailean his very first-ever Christmas present. A fuzzy, green slipper of his very own (hopefully mine will no longer go missing and turn up under the bathroom mat or nudged behind something) which he ran around with, at top speed, for about 15 minutes. I made a mug of Horlicks, for I am old.

Then Cailean napped on the sofa, keeping the slipper close by, and I watched the movie The Narnia Chronicles: The Lion, The Witch & The Wardrobe which is a favourite (remember reading the stories 45 years ago?) and is certainly relevant to the Christmas season.

The people upstairs were awake. They had some rather glorious Christmas carols playing on their stereo, but not too loud for comfort down here.

A couple of hours later, we went back to bed with the soft buzz of Horlicks, slippers and Aslan to send us straight off to sleep.

I'm going out to Christmas dinner with friends just after noon. We will, no doubt, watch HM The Queen's Annual Christmas Message on the telly at three o'clock. We got our first television in about 1959. I'm not sure whether the Queen's Message aired in Bermuda that year, but I've watched it in Bermuda and in England for about 50 years. Before that, we listened on the radio. It's a very nice tradition.

Growing up in Bermuda, Christmas dinner was on Christmas Eve: my grandparents, my Uncle Harry and his family, and our dear friends Margaret & Joe came every year. Turkey, ham and vegetables, roast potatoes, then sherry trifle. I recall the year I moved up from the small table to the main event. After dinner we walked through the citrus orchard to my Uncle Jack's house for eggnog and a slice of cassava pie. My sisters and I opened our gifts on Christmas morning. Always a big tin of Quality Street Chocolates from Mr & Mrs Coddington. The choccie in the purple wrap was, and still is, my favourite. Our spaniel of that year usually had a red or green bow attached to her collar. Not something my little dachshund would tolerate in 2008.

Christmas Day was quiet, leftovers to pick at, books to read, telephone calls and the Queen's Message. Sometimes my father would come by and we'd visit with him for an hour or two ... a drive in his car and we'd find a little cafe open somewhere and have a milkshake (usually too expensive an option, but it was Christmas).

On Boxing Day, the day after Christmas, we'd be ferried somehow to my Uncle Harry's home for the afternoon. More eggnog and cassava pie, and another sit-down meal in the evening.

It's a wonder my sisters and I were not fat children, you might think. However, be assured that this was probably the only time of year when we exceeded our RDAs of anything.

My parents have been dead well over a decade, my grandparents are gone, Harry's and Jack's wives, my Aunt Anne and Aunt Brenda, have passed away, Joe left this life in the 1990s, the Coddingtons as well. Our spaniels were brief candles.

Of course, I returned to the UK, as did my youngest sister and her family. My other sister is anticipating (most keenly) her first grandchild in a few weeks' time, her daughter lives in the south of England and I wonder if my sister and brother-in-law can stand to be 3,000 miles away for long. This baby, a girl according to the ultrasound, would be my parents' first great-grandchild had they lived, and my grandparents' first great-great grandchild.

For Cailean, this is a first Christmas. He's only nine months old. In just a moment, we are going to walk out in the village for an hour. We'll most likely bump into some of his friends, dogs and people, as they get their exercise before lunch.

My flat is next to a little Catholic church with a very long name (let's not leave out a single local saint!) and I can hear singing there, through the fog. Christmas morning mass.

Isn't it remarkable that in this crazy world, the only sounds at this moment are carols in the mist? Christian or not, you'd have to like that.

I loved this post, Ross. It reminded me of all the Christmassy things my family did when I was young. Thank you for jogging my memory. And I loved it because, even though I haven't been introduced, I love cailean and his world. The slipper is absolutely smashing. It makes a person wonder who might actually wear anything quite that bright?

I am also glad to know that at least for Christmas day your neighbors upstairs had the good taste to play music of the season and not The Eagles Christmas Album.

Cheers from Costa Rica and a happy New Year!

Oh, yes. Christmas chocolates! When we were living in Verdun, France, I asked my grandmother to ship us a box of "See's Chocolates," See's was a local chocolate maker in Los Angeles. It was too far to ship VanDeKamp Bakery sugar cookies.

Merry Boxing Day, plus one my friend.

you and cailean have such a sweet, gentle life together. i love to think of you up there in the misty north with your choccies and your slippers.
casava pie. there's something i haven't thought of in years! i can't even rememeber if i liked it.
:) khairete
suz

Cailean is a lucky pup. Maybe you should stick your foot into that slipper now and then so Cailean will think he's getting away with something. any self-respecting dog has to thing he's stealing something of his master's now and then.

Cailean's been pretty good about not nicking my slippers now, and has taken to that of his own. He has, alas, developed a sock fetish ... My socks, with my feet inside. He doesn't bite my toes, but does this odd sudden chattering of his teeth over them when I least expect it. Super-tickling sensation.

Now that Cailean has grown up enough to be left to roam the kitchen (I just had my computer converted to wireless, so no cables on the floor) when I'm out ... his cage has become a playpen! So many toys. He takes them out and deposists them all over the flat, then ... sometimes ... gathers them all back and lounges in his cage under and on toys, blankets and chew-things and looks to be in Dog Heaven. As it should be!