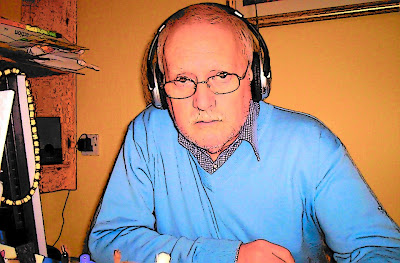 This will prove a brave kingdom to me,
where I shall have my music for nothing.
William Shakespeare (The Tempest, III ii)

DEAR GOD BUT I LOVE MUSIC. And I find it difficult to believe that there are people who might not like music much, or at all. Mind you, I can understand differing tastes in music. However, a person who has no time for music, turns it off, walks away, doesn't go there…

No such person? You never met my mother. I never saw my mother read anything other than the daily newspaper, and she was a bit fanatical about that. But she never read magazines, she never owned or borrowed a book in my lifetime (I was born when she was 23, she died aged 66), she didn't even look at picture books. Happily, she permitted me and my sisters any amount of reading matter.

My mother had dreadful eyesight. Her right eye was what one used to call lazy if she took her glasses off. Her vision was dreadful. I can only think that was what kept her from reading and, indeed, going to films and watching much television.

My mother stared into space much of the time, without a radio or a record playing music, or talk. No call-in radio, no hit parade, no golden oldies. Conversation was limited to a nightly call to her mother, my grandmother, who outlived her by 14 years, and that was a series of yeses and nos.

I know it had not always been like this. As a child my mother played piano, and I understand that she would rise at dawn to practise. In a box on a shelf, untouched, we once found stacks of rather advanced piano music, which she admitted had been hers. And confessed she could no longer find middle C on a piano. The music had simply (probably not so simply) just run out of her. My mother was not at all concerned when I asked if a musical friend of mine might have her sheet music. And so they went to him, my mother's over-neat signature in the upper right corner of each piece.

I bought my first record album before I had anything to play it on. I took the Beatles' "Please Please Me" album to friends' homes to play for a few months. When it became clear that the Beatles were not just a fad and that I'd be buying their next album, my mother found the money to buy a record player. Actually, she went with me to a store that sold them and wrote a cheque for £26. I remember that, the amount she paid, as it was rather a lot at the time and under our generally straitened circumstances.

Quickly, I started buying record albums and a few singles. I believe they'd all have been by white British pop stars for the first few years, till about 1967. Albums cost 31/6 (thirty one shillings and sixpence) which must have been equivalent to about $4.50. My mother showed no interest in my albums though she was still in her thirties, hardly over-the-hill.

I remember someone gave Mother a number of "Sing Along With Mitch" albums, second-hand but with song sheets intact. However, they were never, ever played. I liked the songs, still do, but not the Mitch Miller method of singing them as a chorus, it always sounded so false. Of course, it was concocted, the idea being that no matter how bad one's voice was, sung the Mitch way you could get away with it.

All the moments were filled with background music. If I went fishing from our dock (and I did at every fair-weather opportunity) I took my transistor radio. I grew up listening mainly to Motown music, which I really liked (still do) played on the Bermudian radio stations, and British pop late at night beamed out by stations on the Eastern Seaboard, especially WABC in New York City.

I upgraded the record player a few times, and eventually built up a sound system. I played my music very loud. Very. Stereo was not enough, I wanted to get every molecule in a room vibrating. If that was not possible, I'd wear a headset and turn up the volume on the inside.

Needless to say, I'm quite hard-of-hearing nowadays. Hell, I'm rather deaf to outside sound. When I watch the television I tend to use the captioning if possible, or I listen with a headset or just have to crank the sound up more than most would.

But, in my head, when there's no music playing on the stereo, radio, telly there's music playing. For forty years I've had loud music going day and night, all my waking hours at least. It's not the original familiar versions of popular songs. All is vocal, all done in the same voice (which is not mine, though, of course, it must be mine) which never goes off-key. At times in my life the soundtrack to my life has been so very loud that it interrupted my other activities. In the 1980s I used to medicate myself to try and get some quiet time. Sleep from a handful of pills does turn off the music, though nothing productive comes of it, it's a false sleep. I now have some supervised assistance, but the music plays on at a dull roar if I'm not careful.

If I'm listening to the radio or stereo, as I do whenever possible, the interior music is overwhelmed, but if I turn off the radio the other music can be heard. Curiously not the same tune, group or genre that I'd been listening to. I might have been listening to Hildegard von Bingen's "Caritas habundat in omnia" online and after the switch-off I appreciate I have "I'm forever blowing bubbles" running in tandem. Not the Mitch Miller version, by the way. My single-voice, which is male, by the way, even for songs made popular by female singers, in tune, rather boring.

My life's mission has been to seek out temptation. Sadly, I've shied away from a good deal of it when I've come across it. I seem to like approaching the flame better than the searing heat, the overwhelming, blinding light. Nevertheless, I have managed to not resist some temptations and I have tried to understand my inner music by the use of substances that, most likely, amplified and perhaps contributed to the experience, rather than to set it in its place to be examined.

I once listened, under an influence, over and over, to George Harrison's "Wonderwall Music" trying to appreciate what exactly music was, in relationship to the Universe, in relationship to a Creator. I'm not much on the gods these days, but if I look at the sky at night I hear the most remarkable things sometimes. Bolero? Mahler's Fifth? The Blue Danube? Have You Seen the Stars Tonight? Not necessarily. How about the Hokey Pokey? Yes.

The Hokey Pokey is the first song I remember singing out loud, at school, while trying to dance. I'm useless at dancing as I always have to deal with more than one rhythm going on in my head. I've fired many a rumba coach, I'll tell you.

I cannot ask my mother if she was listening to music in her silences. Perhaps she was replaying her piano exercises. Can she really have been locked in a complete silence? No music?

Or am I the really odd one simply (or not so) by having it?
On the stereo: Dame Kiri Te Kanawa singing "Tu? Tu? Piccolo iddio" from Madame Butterfly.

In my head: "Lady Madonna" by the Beatles.

Listen to the music playing...

i would love to achieve silence in my head. maybe not constant (would that make you mad) but something other than the constant dialogue. i wonder if your constant music would nut me up?
but i can never not think in words. once doing an echhart tolle exercise i think i did achieve silence for about 5 seconds. it was incredible. never been able to duplicate it.
khaire
suz

This is one of the most . . . clear and comprehensive essay on the voices in the head bit, Ross. I get it. I don't hear it, but I finally understand what it might be like. I think eventually John Nash, who also had constant chatter, although I don't thing music, in his head. He trained himself to discern the real from the internal and just went on. What an absolute effort that must take. Love your picture, For a moment I thought you were a radio DJ . . . you almost did soething like that a year or so ago, didn't you?