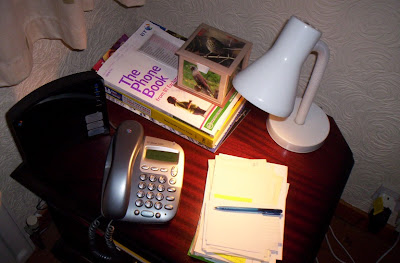 There's not a man I meet but doth salute me
As if I were their well-acquainted friend;
And every one doth call me by my name.
Some tender money to me; some invite me;
Some other give me thanks for kindnesses;
Some offer me commodities to buy:
Even now a tailor call'd me in his shop
And show'd me silks that he had bought for me,
And therewithal took measure of my body.
William Shakespeare (The Comedy of Errors. Act IV, Scene III)

1-5076. After fifty-mumble years I still remember my parents’ telephone number at our home in Tamarind Vale. It was a black rotary 'phone, and heavy with magnets (perhaps?) and my father had built a shelf for it in the dining room. Not exactly the best place and it was soon shifted around the corner onto a table in the living room. It was still there in 1992 when my mother died and I sold the house. That shelf in the dining room became the repository for a set of faux-marble busts of great classical composers. Very small busts, crowded together, and they fell from time to time and not one survived the fall.

The telephone was ours, all ours, for a few years. Then, as people built houses in the development (we had been the first), our neighbours to the north became our party line. Basically, this meant that we shared the line and if we were using our 'phone, Mrs Stevens next door could pick up hers and listen in, and could not make a call. We could interrupt her calls as well. Edna Stevens must be long dead, so I think I can reveal that she enjoyed the telephone and we often had to wait and wait for her to get off the line. She irritated the hell out of us.

We all used the telephone. I was calling my grandparents and answering the phone before I started kindergarten. We called Grandma Lancaster every evening shortly after our tea. When television came along, we called before the evening news. My mother was still calling at about 6.30 in the months shortly before her death.
About forty-five years ago, the Bermuda Telephone Company got rid of party lines and issued new numbers to everybody. Ours was 8-1259. The telephone was still a rotary dial, black and heavy, but it was a newer model, with rounded corners, not quite so Art-Deco. It outlived my mother.

I cannot remember many telephone numbers. A close friend could be reached at 1-3339, and then at 8-0943. But even though we dialled the grandparents night after night, I have no recollection of their number, which would have been unchanged after about 1960. I don’t remember our house number or postal code, or anybody else’s.

I believe telephone calls were inexpensive, sixpence for any length of time (within Bermuda). They were sixpence in the telephone booths. We used the 'phone, and called home if there was some reason that we should. (The movie is running late. I’ve missed the ferry to the Belmont Manor Hotel. We’re going to walk home because we spent the bus fare on Fruit Gums.) Not dead, so far as I know, is a girl who lived across the street from us. Both of her parents worked and their daughter, a child, was forbidden to use their home telephone when she was there waiting for her parents to return at night. Not only forbidden, but her parents put a tiny padlock on the rotary dial so that there was no turning it. I thought then, and still do, that it was strange to prevent a child calling for help if she might need it. Her parents were odd: they made their daughter wear her long hair in unattractive “pigtails” until she was in high school. Go figure.

Because a call was only a few pennies, I thought nothing of gassing to a friend for hours: a mad rush of thoughts and words. One cannot be quite so spontaneous by email, so I still save my pennies for streams of consciousness.

When I went to work for AIG, I had a telephone on my desk. It rang a great deal, internal and external calls. As one could not tell whether it was an outside call, whether business or pleasure, I would answer the telephone with “Ross Eldridge here ...” Trying my best to sound butch. My mother answered the telephone with a high-pitched and squeaky “Hello!” that my friends would joke about. We’d imitate her. Unfortunately, the wind must have changed direction when I was mocking my mother’s “Hello!” and that’s pretty much how I answer the telephone to this day. It’s just the “Hello!”... My other conversation settles down.

I recall my father’s first mobile telephone. He was particularly pleased to be able to talk on it while driving. This when mobiles were the size of a toaster. I got my first mobile telephone in, I think, 2004. I got to choose the number and picked one with lots of ones and threes in it. It may have been clever, damned if I can remember it now.

A friend of mine, alive and dim, had her first experience of a mobile telephone when out to dinner at a Chinese restaurant in Bermuda. Her dinner companion had a mobile 'phone in her bag and it rang during the meal. My friend was amazed by all this. She said to her companion: “But how did they know to call you here?”

I have a mobile telephone now. It is the barebones thing, no cameras, computers, movies, touch-screens. I can make a call, and get one, and I get texts from T-Mobile trying to sell me a new calling plan. I’m sure I could send a text, but I don’t know how, and don’t want to.

In my living room, I have my home telephone, land line. I do remember its number. (I don’t know my mobile’s number.) I try not to call out unless it’s at night or over the weekend as the calls within the UK are free then. I tend to email family and friends overseas. I nearly always use the speaker device in my front room. This gets Cailean going if he hears a familiar voice.

I have a rather good memory for many things, especially involving words and names. I’m useless with numbers, except for dates (years, not days and months) of famous events. Henry VIII died in 1547, Magna Carta signed in 1215. That sort of thing. When I think of all the people and places I have called often over the years, their telephone numbers a kind of identity code, it’s astonishing that I cannot recall these. I’d love to know the numbers of my childhood! Fortunately, my present telephone has all the numbers I use regularly in its address book.

I get calls. Usually when I’m eating my evening meal or watching something enjoyable on the telly. People trying to sell me time shares in a condo in Tonga, that sort of thing. Happily, I get calls that I enjoy.

Today has been different. Rather a lot of family calls in and out. My younger brother, Guy, a lawyer practising in the British Virgin Islands, slipped and fell in a companionway after skippering the sailboat Luxury Girl at the International Rolex Regatta in St Thomas, USVI. Guy hit his head, and was killed instantly.

I had this blog entry written in notes on scraps of paper. Today I’ve been out at the beach with Cailean, sitting in warm sunshine, thinking about my sisters and brothers. I’m the oldest; one doesn’t expect to be losing a sibling about 15 years younger.

Guy’s passion was sailing. Our dad, grandfather and great-grandfather Eldridge were all in the Royal Navy, as were (and are) other close family members. Guy liked to sail around the Caribbean. I think he had three boats. Guy’s partner, Sue-Ellyn, would sail with him, island hopping. Sun, sea, sand, surf, spinnakers and sails.

If one must die young, it seems to me that it might be good to die doing that which one so enjoys. I’m sure Guy was happy being a lawyer, but would not have wanted to trip over a carpet while leaving a courtroom. Guy was outside, on the sea, with his mates, on Friday. I imagine he must have been damp and salty. Chances are the last words he heard were the lads talking boat-talk. Nautical, but nice. Guy would not have had time to hear: “Watch out!” and “Oh! Shit!”

Hi Ross. This was a fun romp through your telephony history. I don't remember too many numbers other than the prefixes, which were things like capital-8 and the like.

My old friend Miss Olga got her first cordless phone when we were renting a small cabina from her. I was over at her house one day and neighbor friend, who also had one, was also there. The neighbor was complaining that her cordless phone wasn't working property, so I suggested she call Miss Olga so we could see what the problem was. She looked somewhat confused and then said, "But, I'm here. Too hard to explain that not only could she receive calls from afar but also make them as well. They both caught on soon enough.

My new satellite has freed up my phone for the first time since we've been here. The first time I was surfing the Net and my phone rang, I was as nonplussed as Olga and her friend.

I stagger into the 21st Century. As I write this Alan is talking to his brother over the Skype phone, a small line connects us in our different tasks

Hi Ross: I was Guy's friend from Mt.A and Bermuda. So sorry about his loss. When we lived in Bermuda we shared a house with him, and got to know Bo, Dennis and Chris well. Chrissy

Hi Ross: I was Guy's friend from Mt.A and Bermuda. So sorry about his loss. When we lived in Bermuda we shared a house with him, and got to know Bo, Dennis and Chris well. Chrissy