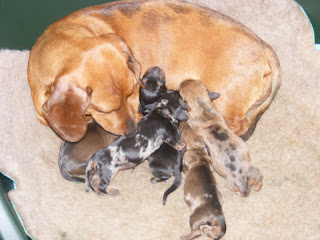 Cailean (centre) 8 March 2008
THE MEN IN TOWN seem to recognise immediately that Cailean is a male dog. They bend down, scratch him around the ears, and say: "Hello, son …" which I think is a particularly charming way of addressing a dog. I tended to call him "baby", but have recently switched to "kid". He's no longer a baby: Cailean is a year old tomorrow, 8 March 2009.

The women in town nearly always take Cailean for a female. Now I know he's lost his goolies, but his todger is intact. Of course, said todger is nearly out of sight as Cailean has very little clearance from the ground. He also squats to pee, unable to easily salute fire hydrants and utility poles. A miniature dachshund thing.

It's the children who could care less whether Cailean is a boy or a girl. He is, foremost, a "sausage dog". Toddlers hardly able to frame a phrase seem to know that they're meeting a sausage dog, and it's often for the first time. I think parents must read about them to their young children, show pictures. The sausage dog is awfully cute.

Fortunately, Cailean has a lovely nature and adores children. He's very fond of the extreme-aged as well, and all in between. He does, for some reason, take a minute to click with a few people, and he's not much for fox terriers because there's one in the village who has made barking threats on a number of occasions. 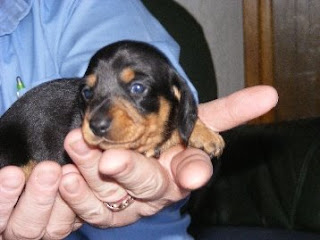 Cailean at two weeks, March 2008
Cailean had four siblings (a brother, Billy, and sisters Ruby-Roo, Lucy and Delilah) in his litter, and has a number of half-siblings in other litters. Cailean's father, Buttons, is a stud. Cailean looks like Buttons, a black and tan, though there's just a hint of his mam's red fur here and there below the surface of the black. 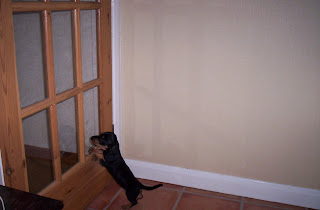 Cailean at ten weeks, May 2008
I have been lucky in that Cailean was house-trained within a very few weeks of coming to live with me, and we've had perhaps three "accidents" in the past nine months. As he sometimes stays alone for four or five hours if I'm out and unable to take him with me, I expected we might have puddles when I returned. So far, not at all. He holds his water. The two or three untimely widdles came when visitors arrived and Cailean was that overjoyed to see them, so just a wee trickle.

Baths are welcomed. My dachshund Aleks also liked to be bathed. Cailean enjoys the shower spray, quite hot water, lots of pet shampoo and then conditioner. I heat a bath-towel and wrap him in it after the rinse and rub him dry. This appears to be the part of the process he likes best. Then he's wrapped in a blanket and he usually kips for a few hours with the heating on if the weather (and the flat) is cool. Grooming is easy too. Aleks did not much care to be brushed, but Cailean will sit below where I keep his brush at least once a day and look up at it. I do as ordered.

We travel about in cars and on the bus. In both cases Cailean looks out of the window a good deal of the time, but if he can catch the eye of someone on the bus he'll do the "cute sausage dog" and we soon have someone cooing over him. That's more fun than looking at castles, sheep, cows and great rolls of hay. 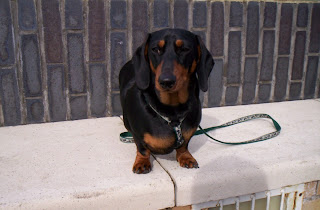 Cailean, aged one year, March 2009
Cailean weighed just a few ounces at birth, less than three pounds when he came to me aged seven weeks. He's heavier than a sofa now; at least it seems so when he wants to be lifted onto the bed. I think he's probably around twelve pounds. He's sleek like a seal, and looks not unlike one at times with the long, mostly black body and abbreviated limbs. Short legs notwithstanding, we walk every day for an hour, sometimes more. Cailean also enjoys running around the fenced-in garden of some friends down the hill from us. He's active in bursts, and enjoys sleeping soundly for hours afterwards. He actually watches the television from the end of the sofa, and will bark if there's a barking dog on a programme. Other animals quacking, mooing or bleating have no effect on him.

This June we are going on our first holiday away from Amble, to a lodge in the Scottish Borders. Just for a few days, but it should be fun for the boy. It will be nice for Cailean to galumph around on the grass, and there are many acres of forest to walk through apparently. Cailean may meet his first red squirrel. Will he bark?

Tomorrow, on Cailean's birthday, I'm hoping for weather fair enough for our usual Sunday morning walk to the once-weekly open-air market on the far side (which is ten minutes' walk away) of Amble. There are at least two stalls featuring pet supplies and I thought I'd let Cailean pick something for himself. I shall get bread and vegetables and look in the book stalls and shall be proud to have the best little dog in Amble by the Sea. 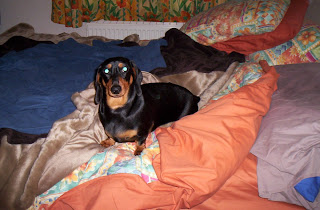 Cailean glows like a Midwich Cuckoo. 7 March 2009
BEFORE I GO I must wonder if a sign of spring is the sudden failure of all the batteries in my flat. It was the digital camera first, then the "Bark Free" electronic device that sounds if Cailean barks indoors (he doesn't now, it took a morning to train him) starting winking at me, and this was followed by the television and DVD player remotes. I trotted over to the minimart with a list of the batteries I needed and then the telephone screen started flashing "Low Batts" instead of the date and time. Back to the corner store for a few more batteries. I know it is time, too, to change the batteries in my smoke detectors. Fortunately, my mobile telephone can be recharged from the mains.

As for me, the sun is above the neighbouring rooftops now and shines into my courtyard, and into my front room. Soon enough there will be natural light in the kitchen and on the back porch in the late afternoon. Cailean likes to sleep in any puddle of sunshine, indoors or outside, and I like to join him. The daylight lengthens considerably every week. We've had snowdrops, the crocuses, irises and hyacinths are blooming now, and the daffodils and tulips should flower within a week. Eight weeks from now there may be bluebells in the wood. My batteries are definitely being recharged.
Posted by Ross Eldridge at 13:52

happy birthday, cailean! what delightful pics of him. he's so very photogenic.
my aunt linda's mini doxie weedles with joy at the entrance of a new person. i've learned not to pat or speak to her until her initial paroxysms pass, or there will surely be puddlage.
khairete
suz

Has it been a year? I loved reading about Cailean's first. Keep the pictures coming. He's a handsome guy.

Hard to believe it's been a year, but then Cailean shares my grandson Morgan's birthday, and it's hard to believe HE'S a year old, too.

Time flies and we have to be there to enjoy all we can before it's gone. Please give Cailean a nose touch for me!