TWO FEET IN THE PAST 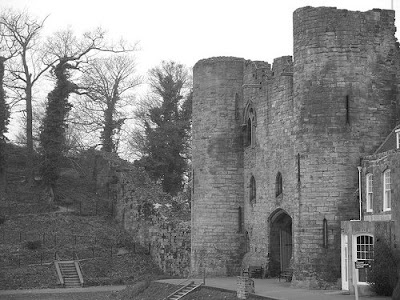 ALBANY: Ask him his purposes, why he appears
Upon this call o' the trumpet.
HERALD: What are you?
Your name, your quality? and why you answer
This present summons?
EDGAR: Know, my name is lost;
By treason's tooth bare-gnawn and canker-bit:
Yet am I noble as the adversary
I come to cope.
William Shakespeare (King Lear. Act V, Scene III)
WHEN I WAS A YOUNG BOY spending my summer holidays with my father's parents in the Medway Towns (that sounds better than Gillingham, Kent, somehow, in 2009 when Gillingham is one of the dodgiest parts of Britain) my Nan Eldridge would wake me at five in the morning, and after I returned to my box room from the outhouse there would be a bowl of hot water and a bar of soap and a towel on my nightstand. I would dab at my face, I don't recall brushing my teeth (we were English, after all), get dressed (short trousers, no matter the weather) and head downstairs again in time to join my Nan at the door. We'd wave goodbye to my grandfather (he had lung cancer and didn't get out much) and walk to the coach station. It would not be six in the morning when we got to the office to present our already purchased tickets.

I believe Nan would have had a cup of tea long before she'd wakened me, for she would have prepared one for my grandfather. I remember buying small cartons of milk at the station, which would be my breakfast. Nan would be carrying, as always, a nylon mesh bag and there were paper-wrapped shapes in it. Our lunch. Other passengers on the day trip would arrive, present their tickets and congregate at the door of the bus we were to take to some stately home, some Norman castle, some ancient cathedral, some museum, some circle of very old stones, some gorge, or perilous cliffs. The other travellers, for the most part, would be English OAPs (Old Age Pensioners) like my Nan (about the age I am now). I don't recall anyone from abroad on the tours, and I think all English children shunned such activities for a seaside holiday with their parents.

My Nan (who had the rather grand name Charlotte Caroline Victoria Crow Eldridge) once told me that her father had taken her to the same places she took me when she was my age. That would have been before 1910 and I'm not sure how they travelled, possibly by train as there were a few members of her family who worked for the railway companies. They lived in Battersea and would have been conveniently located for day trips. My great-grandfather John Lavender Crow, who I met not long before he died, was a tiny man, a compositor in London, not reaching five feet (neither did his daughter, Lottie, my Nan, when she was fully grown). My great-grandmother, Jessie Caroline Moon Crow, was even smaller, a retiring woman who preferred to suckle whiskey from a bottle in her kitchen rather than entertain her visitors. The Moons had come up from Somerset, by way of the poorhouse, when Queen Victoria spanned the globe.

Nan knew a fair bit about the places we visited, and I think she must have visited some more than a few times. I cannot imagine my father being trotted off to Salisbury or Ely Cathedral to look at some old tombs and plaques, but his sister might have enjoyed that sort of thing. I should ask her, she has outlived him by many years, lives in Australia now.

Once the coach was on the road, before seven o'clock in the morning, everyone, ourselves included, would unwrap their lunch packets and consume everything. That was expected and I noticed people still doing that when I was in my late teens on a number of tours with my mother when I was at college in the Medway Towns. The last coach tour I took, a two-week rather upmarket affair around the United Kingdom, was quite different: I was the only person not an overseas tourist (Americans, Canadians and people from the Antipodes). That was three years ago, and I was the only person eating on the bus. I'm not sure it was permitted. I didn't venture drinking on board. That posh trip would have been more fun as a moveable feast, but people have weak stomachs nowadays, bus windows don't open, and the operators don't want to be cleaning up vomit along with the crumbs.

I liked the cathedrals best, as did my Nan. We'd read the engraved markers, no matter what strange language they might be in, and admire chipped toes and cracked noses, and Nan would explain how the positioning of the limbs of the outstretched knight, his statue atop his tomb at least, indicated important things about him. His armour might feature a cross, a crusader. There would be coats of arms and standards and mottoes.

I nearly always bought the guidebooks available at the attractions we visited. I also saved tickets and leaflets, and anything that was free that interested me. I even collected leaves and seed-pods. I had a little camera that took horrible pictures, black and white as I couldn't afford colour film and processing. Nan couldn't figure out the camera, so I'd take pictures, out of focus, of battlements and Horse Guards. I wrote up a little journal some days. I did not make up scrapbooks, I just boxed my souvenirs.

At school, history was my favourite subject. We studied British history for the most part, at least until I was about 15 when we did a year on the American Colonies. I liked the history of the British Isles best because I had often been to the places mentioned. My history master expected me to get his top result in the final exams, but I only just scraped by as the papers had mostly been on the American War of Independence and the period "back home" when that was going on. Hardly my favourite era.

When I returned to Bermuda after doing my bit at college in England, my boxes containing the treasures of my boyhood, my guidebooks and notebooks and dried leaves had all vanished. My sister had pitched them out for no particular reason, I was told. My mother wouldn't have done it, and there was only my sister who could have. I rather wished she had only stolen them. Twenty-five years later, while I was travelling in the USA, she stored the family photograph albums that had been left to me in her crawl space on wet earth and they were destroyed. I have no family photographs now.

In fact, I looked around the flat last night to try and figure out what was older than about five years. It was a short list: A grey tweed jacket that dates back to 1989, a friend bought it on the way to see the Berlin Wall coming down. There's a wooden box I bought at an antique fair in 1970 for £40, which was a great deal of money then, in which I keep my mother's birthday book which she started in 1937. I wear a gold-plated ID bracelet my father gave my mother some time before they married in 1947, one side reads "Mavis Lancaster" and the reverse says only "From Dennis" (to think they married!) which I never saw my mother wear. And there is one other less tangible asset that goes way back: My genealogy project.

As of last night there were over 980 names on my "Family Tree". I recently added my parents' first great-grandchild (had they lived) who was born this February of 2009, her parents live in the south of England. And I added, also, Ralph de Stafford, born 24 September 1299 in Tonbridge Castle, Kent, who is my 20th Great Grandfather. Ralph's father, Edmund de Stafford, my 21st Great Grandfather, born in 1272, had been made a Baron by King Edward II. Ralph inherited that title, but on 5 March 1351 King Edward III created Ralph the Earl of Stafford for being an outstanding personage at court and on the battlefields of France (he had a command at the Battle of Crécy in 1346, a battle our class had re-enacted in our history lesson). Ralph was also made Lieutenant and Captain-General of the Duchy of Aquitaine and a Knight of the Garter, an order founded in 1348.

Those noble folks married into all the noble families and I keep finding more titled ancestors, a favourite being Roger de Grey, Baron Ruthin, my 18th Great Grandfather, born in 1290 in Ruthin, Denbighshire, Wales. Note the French names: They were Norman families that came to Britain after the Conquest of 1066.

My father's side of the Family Tree is only back in the 1500s at the moment, and the best we have there are shoemakers of note, if not courtiers. My father used to say he was descended from titled people, but not in my research yet. Though aren't we all in Genghis Khan's remnant? The Earl of Stafford, Baron Ruthin, Baron Codnor, Baron Wilton and others are in my mother's side of the tree.

I'm sure my Nan Eldridge, who loved and encouraged my mother, even at the expense of my philandering father, would be delighted that my history is so alive through my mother. Nan started me on this journey into the past, begun on buses as a boy. She died in 1977, before there were home computers, never heard of the Internet, never considered genealogical research as a hobby (it is mine), but I can imagine she'd trot me off to Tonburton Priory where Earl Ralph de Stafford was buried in August of 1372 to look for his statue. She'd be able to tell something of his achievements from that monument, and might say: "Why, Ross, you have the de Stafford nose."
Posted by Ross Eldridge at 15:43

Someday . . . a memoir, Ross. You have such memory for the detail, and such a gift of bringing the past into the present.

Hi, Ross. I loved this short trip with you and your nan. The castle photo is gorgeous!

I find it odd that the Brits don't eat while traveling. Here, in Costa Rica (and the rest of Latin America) food is at the core of travel as though people were afraid they'd starve while away from home. Or maybe it's a comfort thing, easing the stress of trave. Whatever the case, there are vendors with greasy empanadas at every stop and hawkers, with their gravely voices, calling--PIPAS! PIPAS! PIPAS!-- who sell drinks and treats where ever traffic has slowed to a stop. The bus stations are filled with steam-table type restaurants for take away (para llevar) and I've always said: If there were a crash, people would be killed by flying food and drink containers.

I love hearing about your genealogy hobby. What a fun thing and it sounds as though you've turned up (no pun, there) lots of Eldridges at a local cemetery.

crow, moon, lavender......are you actually native american?????
i'm sad that so many of your childhood treasures are gone. i lost a lot of my favorites when i moved out from the insane cowboy one hasaty afternoon when he was gone, but because i'm in a family of packrats, there's still way more stuff than will be of any interest to future generations.
i love that you have fond memories of your jaunts with your gran. for a lot of kids that would have been torture.
khairete
suz