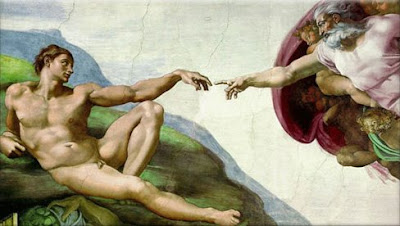 And the LORD God said,
Behold, the man is become as one of us,
to know good and evil.
Genesis 3:22
ACCORDING TO THE SYNOPSIS in the Radio Times, the young girl, only thirteen, had been raised in a family that pretty much kept apart from the world. She was home dwelling and home taught. She had never heard of the Beatles. And she was going away from home for the first time, with her older brother to visit his digs at his college in Derbyshire. There she would bear witness to the saving power of Jesus to his friends and partygoers.

One now feels rather horrified that a child only just in her teens lives in so narrow and shallow a space. It is all very well to recommend looking only forward, along a ginnel with the light of Eternal Life twinkling at its far end, but it now seems to me that we are meant to open a few gates on the way, to gain knowledge by experience, not just by so-called faith. Do the gods want us to pass on surpassing joy, not knowing creation personally, and should we dash along the passage dressed in our sad rags and faces into the waiting arms of something indistinct if bright?

Young Deborah is already a parrot. She witnessed in her home area in the southwest of England to some scruffy teenagers, and she witnessed to the programme's presenters, and then she witnessed to people when she spent a few days with her brother away from home. The very same lines, word for word. Deborah said that we are all sinners and going to Hell, and that one who tells a little white lie is as much a sinner as a paedophile.

I recall very well young mothers holding their toddlers to the microphone on the platform during Fast and Testimony Meeting once a month at the Mormon chapels I attended. The mother would say a few words and prompt the wee child to repeat them: "I know that God lives, that Jesus is the Christ and that he lives, and I know that Joseph Smith is a prophet of God…" I don't think one should teach a parrot, I mean a child, to say: "I know that…" but to think: "I wonder if…"

Deborah, Servant of God, believes emphatically that the Earth is not billions, or even millions or many thousands of years old. I was not surprised to hear: "Dinosaurs lived with Adam and Eve in the Garden of Eden." She does not believe in Evolution.

The Mormons - I should write of things I am aware of, so I'm not talking about Buddhists or Australian Aborigines - believe that there was a literal Creation, no Big Bang, and that the Garden of Eden was located in what is now Independence, Missouri. Were there dinosaurs in the Mormon Eden? Perhaps not. Someone once parroted that the many dinosaur and other ancient fossils were in our rocks and sands because they had existed on other worlds from ours and the gods (plural) had used those materials to construct our world. I rather like that idea.

There were dinosaur footprints preserved in former mudflats, now stone, outside the little town in southern Utah where I once lived. They may have been deposited there within rocks in October 4004 BC, or at least more nearly that date than millions or billions of years ago, having come from a no-longer-useful planet on the far side of Kolob. Kolob is the planet on which our God dwells. Yes, a charming notion. A devout Mormon should believe it.

When Adam and Eve were given their notice in the Garden, they moved nearby to Adam-Ondi-Ahman in Missouri. I'm thinking they were glad that the dinosaurs were already in those recycled rocks, not wandering with them. How did Deborah's dinosaurs die, and when? The Great Flood is my guess, but I didn't hear that for sure on the programme. Can you picture Noah with his clip-board looking around and asking: "Is T-Rex on the boat?" 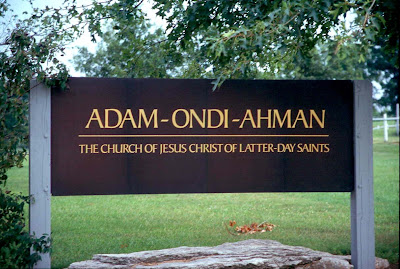 "You Are Now Leaving Eden"

We've had a great many documentaries, films and programmes on Darwin and evolution this year as it is the great man's 200th birthday and 150 years since The Origin of Species was published. Deborah doesn't watch television, though she has a computer with an Internet connection. She might benefit from seeing and weighing the evidence for a literal creation and evolution.

Today I watched Jurassic Park III with a friend. I'd seen the first two films. This one is actually rubbish. For one thing, the dinosaurs created by computer animation are too solid-looking, too beefy, and too toothsome. I much prefer the beasts in the first film: pale and ghost-like at times, the frightened viewer fleshed them out. Whether we shall ever clone dinosaurs might just be decided in my lifetime, it may well happen in Deborah's. Back to Eden. Or back to the Rocks? Will it be time for another set of gods to grab great clarts from this Earth and smack them into a ball and set it spinning in the back of the beyond?

At the end of the day, I certainly don't say to Deborah: "You are all wrong!" What I would say is: "Look about you! Leave the alleyways of Earth and stand under your God's wide heaven."

What do I believe? That there is matter, I could call it rock, and it adheres and repulses and all sorts of forces act on it and through it. I believe this substance, in its various elements forms and reforms, gets reused and recycled. Ashes to ashes. Big Bang to Big Tree to Little Acorn.

I was on the bus the other day and while reading the Metro newspaper I noticed a young man a few seats ahead of me reading a glossy magazine intently. When he got off at a stop before mine I realised it was someone I'd seen before. A fellow with Down's syndrome. When I got home I sat on the sofa to relax a bit after chasing around Alnwick, and Cailean came running up to me indicating he wanted to play. So I said: "Get a ball for me to throw. A ball." And Cailean ran into the kitchen, rummaged through over a dozen different toys in his cage and hurried back with one in his mouth, his favourite ball.

The lad on the bus, Cailean and I are all made of rock, Joni Mitchell's star stuff. And we are all thinking creatures. I don't believe the act of thinking is a product of bits of rock rubbing up against each other, I believe in a spirit that inhabits all things, that becomes a soul in any individual, man, boy, dog, dinosaur. I think the spirit is a finer matter. Rocks are recycled, the spirit flows. I'd like to think that when the spirit is a soul, that soul might sometimes, if not always, reappear intact in another rocky combination. Then I really would be Napoleon.

So much to think about . . . but Deborah the parrot? I've know a few Debbies and Dons who squawk mindlessly--like mockingbirds.